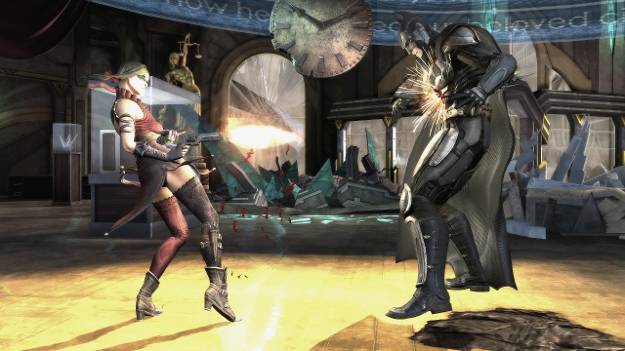 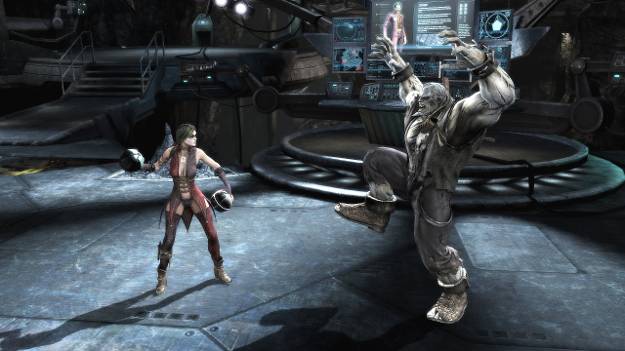 While the superhero genre has really come into its own as mainstream entertainment the past few years, video games haven't really kept up with movies in terms of overall greatness. Video games can boast the Batman: Arkham series... and... ummm... Mortal Kombat vs. DC Universe? Spider-man 2? Ok, so video games' track record is not as littered with great properties like Hollywood's Dark Knight, Avengers, or even Watchmen takes. NetherRealm studios, the makers of last year's awesome Mortal Kombat reboot, aim to tilt the scales a little more favourably to the video game side of things.

While there have been some really good to great fighting games involving superheroes like MK vs. DC and the Marvel vs. Capcom series, Injustice is taking the superhero fighter to a different level. With Injustice, it all starts with the roster of characters. Although at this point in time, the characters announced only include Superman, Batman, Wonder Woman, Harley Quinn, The Flash, and obscure Batman villain Solomon Grundy, that's a great start. We caught a glimpse of the character selection screen, and saw enough room for another 20 or so characters beyond those mentioned. 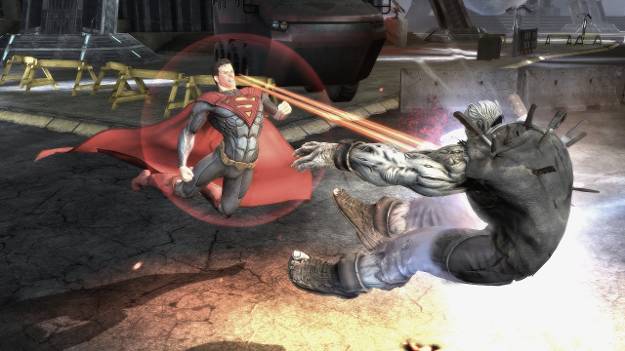 Each character not only plays more differently than they did in Mortal Kombat (which was very balanced, but lacked a clearly defined feel between characters), but can interact with the shockingly interactive backgrounds in different ways. For example, in the demo we saw, Batman would take Solomon Grundy's head and smash it into the hood of a car on the background. Grundy, being an enormous zombie with super human strength, retaliated to Batman by smashing the entire vehicle over his head. The game is filled with a ton a battlefield toys, weapons, and interactivity that every character interacts with differently. Another example showed The Flash getting cornered by Superman in the bat cave, so The Flash simply pressed a big red button and the parked Batmobile in the back fired missiles at Superman to give The Flash a moment to recover. The battlefields themselves will also suffer real time damage and get destroyed as the epic battles go on.

The battlefields themselves will not only get damaged, but evolve as the fight continues. Players can knock each other out of a current arena, and into another by smashing through the ceiling or through walls. Being a very cinematic game, the transitions are handled smoothly and sometimes hilariously between the streets and the inside of an office building, for example. It really is like watching your favourite superheroes duke it out when you see them jump from one arena to the next while smashing through walls and floors. What remains to be seen is whether these transitions truly add something to the gameplay, or will get repetitive and tiresome over the course of a playthrough.

If you liked the X-ray moves in MK, then you'll love their equivalent here. Each character will use their super powers to the fullest. It's hard not to crack a smile when The Flash will run around the world to deliver a knockout punch to Superman, or Solomon Grundy pulls out his own tombstone from out of his chest and smashes it over Batman's cranium. The game utilizes a similar energy bar system to MK that allows you use portions of your bar to do extra damage, or save up the whole thing to do a really damaging attack instead. Bear in mind that this is not an MK game, despite the comparisons I've made, and Injustice will almost certainly carry a bloodless Teen rating instead of MK's Mature, which suits the property better anyway.

It bears mentioning to comic purists here that NetherRealm was given some free reign on the design on the characters, and they don't look exactly as they would in any comics I've read or movies I've seen. The redesigns I've seen look sharp, and the fact that both Harley Quinn and Wonder Woman are even partially clothed is a big step forward from the overt misogyny found in MK.

While we weren't made privy to what modes will be available, if MK is any indicator, it's that NetherRealm doesn't skimp on content. It's fairly save to assume we'll see a very fun and campy story mode, a standard ladder mode, and hopefully a new challenge tower. It's probably also safe to expect a few extra characters in DLC in addition to some fully featured multiplayer modes.

We were so impressed with Injustice's take on superhero fighting games during our visit to WB's booth at E3 that we considered it a shoo-in to be nominated for our best fighting game of show. The fact that it won the award too is not a slight against the other fighters presented at the show, but let's be honest, no other fighter at E3 allowed me to throw batarangs in Superman's face. Injustice has a tentative release date sometime in 2013 for the Xbox 360, PS3, and the Wii-U.