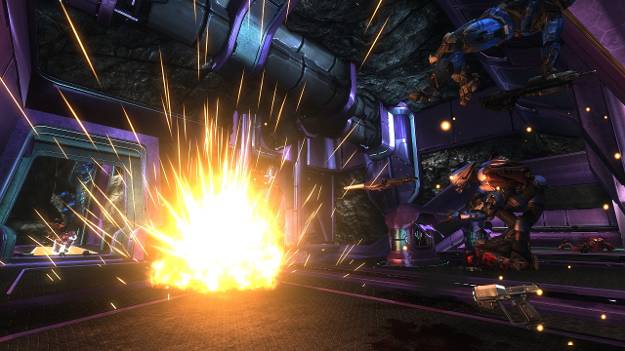 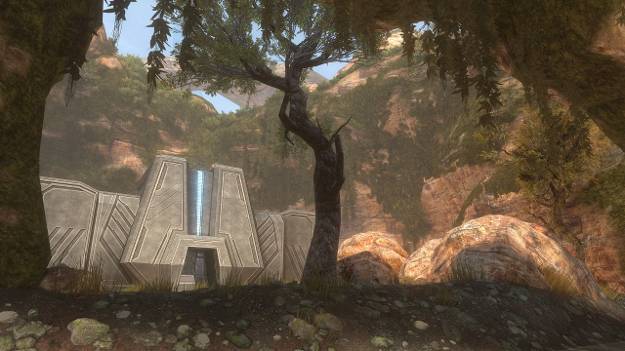 Back in my days at good 'ol Carleton University, there was nary a video game staple that got more playtime amongst myself and my college buddies than the original Halo: Combat Evolved. Whether it was marathon sessions plowing through the entire campaign on Legendary difficulty with a friend in split screen co-op or lugging over multiple Xboxes and TVs for some addictive capture the flag and team deathmatch action, Halo was and remains a defining milestone in the history of video games.

So it was some trepidation that I booted up the Anniversary remake for this review. Would my incredibly fond memories be tarnished, or does Halo truly hold up as one of the all-time greats. The good news is that this is a case of the latter. Mostly.

In the unlikely event that you've entirely unfamiliar with Halo's storyline and are still reading this review, a super quick re-cap. The planet of Reach has just fallen, and humanity is on the run for a coalition of murderous aliens known as the Covenant. While the remnants of humanity are on the run, they stumble upon a ring world known only as Halo. You play as the Master Chief, a Robocop-like cyborg whose abilities to shoot first and ask questions later are his primary asset. The Master Chief's ship crash lands on Halo, forcing you explore the world and discover its darkest secrets, one that could threaten all of humanity. What I really appreciated about this first Halo's story was how streamlined it all is. The religious themes didn't kick in until the second instalment, and the strict adherence to the franchise's massive canon didn't exist yet. It's a simple story, told surprisingly well for a ten year old game, and the campaign benefits from the straightforward narrative.

As far as the gameplay itself goes, what can I say? It's Halo, through and through. In a way, it's fascinating to see how much (or little) shooters have evolved since the original game. For a game with Combat Evolved in the title, this franchise has done very little evolving in ten years. In fact, I found the mechanics, level design, and story telling in this instalment to be superior to every other Halo game, even the latest title; Reach. The jumps are a little floaty though, but aside from that, the controls are very refined and tight.

The campaign essentially boils down to shoot, drive, shoot, with some mild puzzle solving, and more shooting. Friendly and enemy AI remain surprisingly impressive to this day, helping create a convincing battlefield illusion. Vehicles still control beautifully, and there's quite the variety to try out, from flying Banshee ships, to heavy hitting tanks, to quick hover bike Ghosts, to my favourite, the powersliding Warthog. Unlike more recent titles, the AI doesn't drive the cars, but considering how awful the pathfinding for AI drivers was in Reach, this really is no big loss.

Think about all the innovations Halo spearheaded 10 years ago. Then think about how little has changed in shooters since. A quick run down of my memory tells me that Halo was the first FPS to feature a two-weapon carrying capacity, a regenerating health bar, quick trigger grenades, sticky grenades, full campaign co-op and open battlefields. It's still as fun as ever, although some of the open level designs can be confusing and objective vague, especially compared to straightforward shooters like Call of Duty. At least the levels are nicely varied, and you'll be surprised at the sheer amount of different environments (both open and corridor) you'll find within Halo's ringworld. Oh, and the Library level is still a pain in the ass.

As far as what's new, it's not all that much. The new graphical upgrade really does look great, and you can switch between the classic graphics and the remastered version with the push of a button. The remastered version generally looks excellent. It runs at a great frame rate and the new textures look sharp. It's staggering to see how much and poorly the formerly mindblowing graphics of the original have aged, and the ability to toggle back and forth is a fun addition. Even with the remastering though, elements of the source material conspire against the game, namely some laughably stiff animations and brutal lip-synching.

Also new to the table is Kinect voice support, but it's more of a gimmick than anything else. You can reload your weapons, adjust contrast, toggle the graphics, and even throw grenades with simple voice commands, accessible from a list in the pause menu. It works really well in detecting your voice, but the half second delay in gameplay as opposed to pushing the buttons ruins any usefulness you'd get out of the voice commands. Also new are hidden skulls that give new bonuses and terminals that give you extra glimpses at Halo's extensive storyline. Both are really hard to find and require combing over every inch of the extensive levels.

Anniversary's Multiplayer is rather disappointing. Playing through the campaign co-operatively remains a truly great time, and now you can do so over Xbox Live as well. On the competitive side, you get all the same modes that you got in Halo: Reach. Included are six classic maps, but not the best ones from the original Halo. That means no Blood Gulch and no Hang 'em High, which were my personal favourites. You get a smattering of individual and team based objective modes like King of the Hill and Oddball, in addition to a new co-op Firefight map based on the campaign's second level. Theatre mode and map editor Forge mode make an appearance as well.

Even after all these years, Capture the flag with vehicles is still the most fun I've had with Halo multiplayer. At this stage of the game, you probably already know whether you like Halo MP or not. In a nice touch, you can upload all the new content onto your hard drive for access from within Halo: Reach. At the same time, the community that has been playing Halo multiplayer for years is almost impenetrably skilled, so if you're new to the game, prepare yourself for a lot of humbling frustration when you hit the servers.

If you've never joined the Halo party and are wondering what all the hubbub over the years is all about, this is the perfect place to start, especially at the $39.99 price point. All in all, Halo's campaign really has stood the test of time, even if the multiplayer included in the package is a take-it-or-leave it affair. It's still a blast to play, and in my humble opinion, remains the most balanced and fun to play of all the Halo titles. For all the talk over the years about "finishing the fight", it's ironic that starting the fight all over again is this much fun.