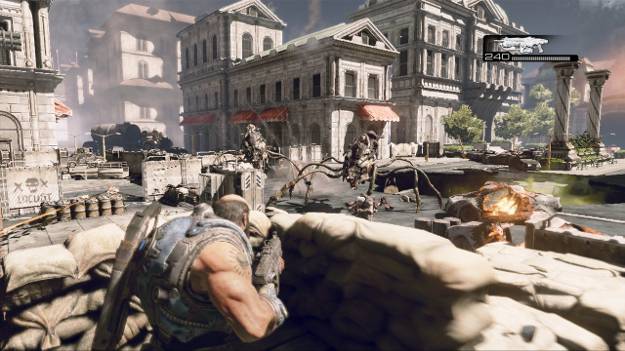 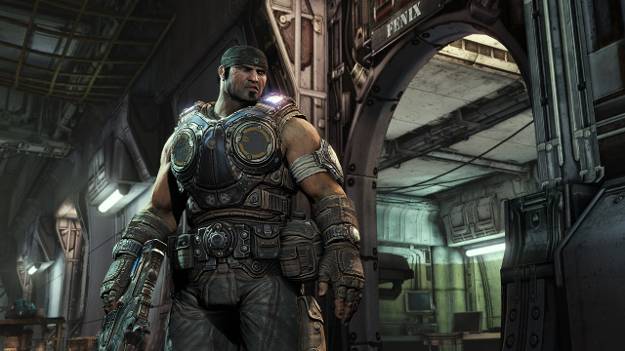 As one of the most anticipated games of E3 amongst the hardcore crowd, Epic had its work cut out for itself with their preview of Gears of War 3. Fortunately, while the game seems to be an evolution, not revolution of the Gears' formula, there's plenty new here to excite any Gears fan, and perhaps entice a new fan or two to the party.

As I sat next to Cliff Bleszinksi and crew from Epic Games, good 'ol CliffyB took the driver's seat for an action packed section of gameplay from the new sequel. The gameplay still involves jumping from cover to cover, all the while popping off a few shots and the occasional up close encounter with a chainsaw bayonet.

New to the fray is a standard bayonet on the assault rifle, which can be lethal when coupled with a quick running start. Couple it with the new kick mechanic, and getting enemies away from you is easier than ever. If you remember those exploding lambent enemies from Gears 2, the ones that instantly killed you if you came up to them with a chainsaw, the kick maneuver is a godsend. In fact, if you melee an exploding enemy and kick them, they essentially become an improvised rocket that will take out any enemies in your line of sight. Another new move involves the ability to jump kick over cover, instead of leaping over and leaving yourself exposed like in previous titles.

This time around, Marcus Fenix and crew are caught in the middle of a three way war between humans, locust, and the mutating lambent creatures. Lambent creatures are essentially infected with a virus that boils them up from the inside out. Throughout the game players will see various stages of the infection, as recently infected enemies still will use some flank tactics and guns, but fully infected enemies will be fully enraged creatures whose only thought is to kill everything in sight. Fully infected creatures will mutate in real time before your eyes, and spawn other enemies. It adds another layer of intensity to an already hardcore game when you don't know what shape or attack pattern an enemy will mutate into next. Just don't call the lambent zombies. "Think something more like Rabies, not zombies," said Bleszinksi, before adding that "the Locust have some new tricks up their sleeve too."

As the series has evolved, there has been a greater and greater emphasis on multiplayer, and on that account, Gears 3 doesn't disappoint. Bleszinski personally stated his desire to have the campaign be replayable over and over with friends, and with some of the latest additions to the game, he just may accomplish that goal. The game now supports full four player, drop-in drop-out co-op play during the campaign over Xbox Live, along with new playable characters like the blonde bombshell Ania, in addition to the well worn characters like Marcus, Dom, and Cole. Different players can also play on different difficulty levels in the same game, which will affect ammo and health levels. Co-operative play is more encouraged than ever before, with the new ability to share weapons and ammo with your squad mates. This ability stretches out into the popular Horde mode as well.

To add spice and replayability to the campaign is the new arcade mode, which adds a slew of modifiers and mutators to the game for some neat effects like making the game harder or sillier. We couldn't get too many details on the modifiers, but Bleszinksi did hint at a "large cranium" mode. The modifiers also can be combined in neat ways, as each player can bring one and only one to the party, and the modifiers are unlocked as players go through the game.

Finally, there's also the new addition of Beast mode, which is kind of like a bizarro world version of Horde mode from Gears 2. In this new class based mode, players take control of one of many possible Locust creatures, from the biggest butcher, to the smallest ticker. The goal is to take out a group of well entrenched Gears through the use of clever strategy, unique abilities to each Locust, and co-operative play. For example, one player may decide to run in as a giant Locust, swinging a huge meat cleaver and taking out humans left right and centre. Of course, this will draw a lot of aggro to that player, allowing other, smaller creatures to flank and surprise the enemy. Players will unlock characters as they progress through the mode, but we were promised a large selection of characters right off the bat. The biggest appeal of this mode is that since different characters have different abilities, there's a locust tailored to every play strategy, from far away snipers, to run and gun fanatics, to medics, and pretty much anything else in between.

The visuals seem mostly unchanged from Gears 2, which is just fine because Gears 2 remains one of the best looking titles on the 360. The engine has been enhanced, which is most notable in the phsyics and real time mutations of the enemies. For the most part however, the visual style and technical aspects are unchanged.

So is this the end of the Gears series that was always promised as a trilogy? From the sounds of things, it is, but the door is being left open for future sequels. "This is the end of the story arc," said Bleszinski, "but while we're giving closure and an end that will satisfy the fans, we may leave a few unanswered questions and let the rumor mill that is the internet churn a little bit."