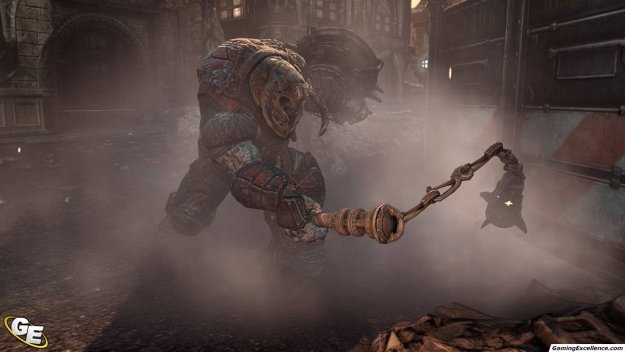 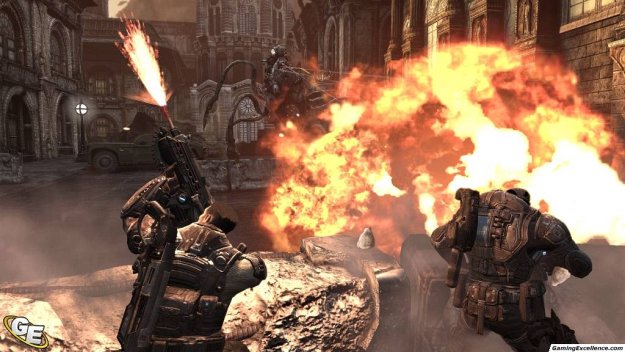 When I first acquired my Xbox 360, I had a sinking feeling.

"What if this whole next-gen thing was just a scam?" I asked myself, as I played game after game that would have been easily possible on earlier-generation systems with some trimmed back graphics and a lower resolution. It wasn't until I picked up the original Gears of War (for the record: I skipped out on Oblivion) that I came to the conclusion that surprises in the gaming industry were still possible, and they might really be on to something with this whole "next-gen" thing. Gears was an adrenaline-fuelled kick in the ass that the action genre had been begging for since the glory days of Doom, and its massive sales numbers reflected that. Still, as fun and fantastic as the original was, there was plenty of room for improvement.

Fear not, Gears fans, for I can emphatically announce that nearly every issue I had with the original game has been addressed and tweaked to near-shooter-nirvana. Those who crave the intensity of an interactive battlefield in their living room must pick up Gears 2 with no delay.

The game takes place a year after the original game, in which our heroes obliterated the bloodthirsty, subterranean locust hordes with the launching of a light mass bomb in their midst. Of course, profits being the bottom line for Epic and Microsoft, the series would not be allowed to end so tidily. As the sequel begins, we are reacquainted with Marcus Fenix, Dominic Santiago, and the rest of Delta Squad as they prepare to defend the last bastion of humanity, Jacinto. It seems that the light mass bomb had the same effect on the locust as a baby carrot has on my lunchtime hunger. The Locust are back and more pissed off than ever, and have found a way to sink entire human cities. Therefore, it's up to Delta Squad to take the fight to the Locust doorstep, and give humanity one last hope for survival.

I dare not reveal anymore, because the storyline is actually far more interesting in this sequel than on the last go-round. Unfortunately, the game ends on another cliff-hanger, and has left huge hanging plot threads that will likely be resolved in the inevitable sequel. Also, while some may complain about the terribly goofy dialogue and somewhat hokey voice acting, it's important to remember that Gears of War 2 is all about approximating a Hollywood blockbuster action movie, and the silly dialogue helps to charmingly add to that atmosphere. Much like a classic Van Damme or Schwarzenegger flick, if you're complaining about the acting and dialogue, you're undoubtedly missing the point.

As far as gameplay goes, Gears 2 is as pristine and adrenaline-pumping as the shooter genre gets. Like the original, the game is played from a third-person perspective, and demands that you spend most of your time behind cover unless you like the feel of bullets to the face. Taking this tactical slant, players must dive from cover to cover, line up their shots carefully, and remain exposed as little as possible in a firefight. Thankfully, the folks at Epic Games have created the best cover system in the industry, and with only a little practice, you'll be flying from cover to cover with a grace that is rarely seen in video games. The system is also improved from the original game, with improved intuition and smoother cover-taking. Rarely will you be able to blame anyone other than yourself for death.

Fortunately, you have more than just a great cover system on your side. The arsenal has been expanded, and the weapons are incredibly satisfying to wield. New to the party are mortar launchers, miniguns, flamethrowers, poison gas grenades, and proximity mines. Of course, the iconic chainsaw-mounted lancer makes a triumphant return and remains one of the coolest weapons in all of video games. This time around, if two opponents rev up their chainsaws at the same time, a chainsaw duel takes place in which the winner is the one who hits the B button the fastest. When enemies are down but not dead, you are also able to take the hostage, curb stomp their heads under your boot, or commit extra gory finishing moves that leave you exposed to enemy fire for longer. My personal favourite is when playing as a Locust in multiplayer, you can rip off a COG's arm and beat him to death with it. If you find yourself in the life/death limbo, you can now crawl away by tapping the A button, which leaves behind a satisfying trail of blood. It's safe to say that Gears 2 will satisfy even the most bloodthirsty gorehounds (such as yours truly).

While the original game was quite short and could be beaten in an afternoon marathon, Gears 2 is almost twice as long, and contains far more interesting set-pieces and level design this time around. You have your requisite urban battlefields, but interspersed in between, you'll fight a giant fish on a rickety boat, get swallowed whole by a giant worm which you must kill from the inside, and storm a locust castle. Each of the game's five acts can take as long as two hours each, and despite the longer than average length, the game is never, ever boring.

Best of all, the campaign is playable with a friend via split-screen or Xbox Live. Friends can actually drop in and out of your campaign at any time, so if you need help with one particular section, your friend can jump right in.

One of the most disappointing aspects of the original title was its lacklustre multiplayer. There simply weren't enough modes or players to keep me interested very long. Don't get me wrong, it was fun to take a chainsaw to a live player's face, but it simply wore thin very quickly. Gears 2, on the other hand, is loaded with a multiplayer suite that could very well keep you hooked until Gears 3 graces your TV screen. There are quite a few new modes, both on the competitive and co-operative side of things.

For those with the competitive spirit, there are a smattering of both territorial and team deathmatch modes. The best of these is Execution mode, a five-on-five mode where players take turns being team leader. Everyone except the leaders get infinite respawns until the leaders are killed. Once the leader is down, the other team must kill the remaining players to win the round. It's a fun mode that encourages co-operative play. Another interesting mode is Wingman, in which teams of two take each other on in something of a free-for-all. Winners are determined by kills rather than the last surviving team, so it does you and your teammate no good to hide in a corner and take out the last remaining player.

However, the crown jewel of the multiplayer suite is the new Horde mode, which pits you and four other players against wave after wave of Locust, gradually increasing in numbers and strength as you survive each wave. As long as your team survives the wave, you'll be brought back for the next go-round. The mode goes up to 50 waves, which is a significant time sink, not to mention a challenge. I was unable to survive past the 20-round mark, but hardcore gearheads will love this all-action, no-story mode.

However, not all is perfect in multiplayer land. To discourage mid-game quitting, the game doesn't give you the option to quit to the menu when in the middle of a match. While a good idea in theory, this doesn't take into account when you're stuck in a laggy match that is completely unplayable. If you want to escape a match, you either have to quit the game to the Xbox dashboard, or turn your system off and on again. The intention is good and I can respect that, but if you're going to prevent midgame quitting, players should at least have the option to set a minimum ping before a game starts so as to avoid that problem.

The original game was simply gorgeous, marred only by a bland colour scheme that emphasized grittiness over colour. This time around, the art style comes much closer to matching the incredible tech. Perhaps the greatest asset to the game's immersion is the expansive and epic environments. I'll come out and say it: Gears of War 2 has the best looking environments I've ever laid eyes on. From the smallest specks of battlefield rubble, to the crumbling buildings, to the untouched forests, it's a simply mind-blowing level of detail and care that has gone into crafting these levels. On a technical level, Gears 2 is staggeringly beautiful. Spectacular lighting, buttery-smooth frame rates, and stunning animation come together to create a highly engaging feast for the eyes. Even though the story is lacking, the look of genuine emotion on the characters' faces is palatable and believable as well. This is certainly amongst the best looking games on the Xbox 360.

Cheesy-yet-effective voice acting aside, Gears 2 is an aural assault on your sound system that will have you neighbours begging for mercy. Fantastic surround effects place you in the centre of the virtual battlefield and all the weapons sound throaty and powerful. There's also no sound like a revving chainsaw hitting hard locust skin. An effective and powerful orchestral soundtrack also adds to the game's intensity.

That Cliff Bleszinski and his crew have taken one of the most beloved Xbox 360 titles and managed to improve on it in every discernable way is nothing short of remarkable. It may not be the evolutionary leap forward for action games that its predecessor was, but rather a logical extension of the groundbreaking original. Not only does Gears of War 2 come highly recommended, but it's easily one of the best games of the year. Rev up that chainsaw and join the battle against the Locust horde -- Marcus Fenix says you won't regret it.