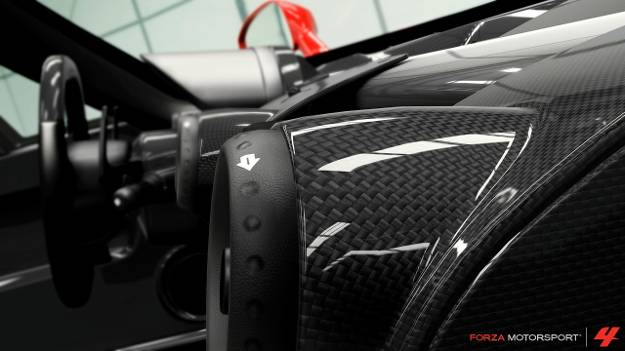 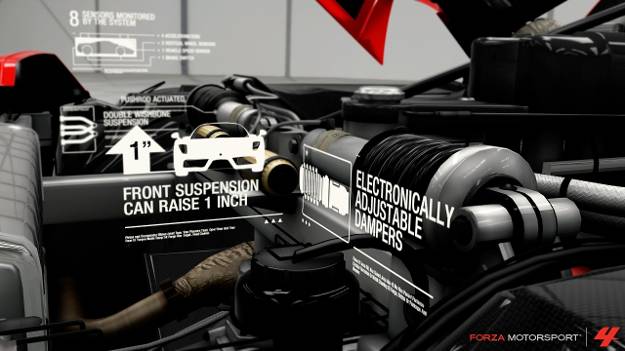 It is perhaps fitting if not unsurprising that one of the first demonstrations attendees to Microsoft's X'11 show in Toronto saw upon entering was a powerhouse Xbox 360 exclusive title. What made Forza Motorsport 4's demonstration notable was that it showed something that upon first glance could change the way gamers decide which cars they choose to drive or collect in the game. It should be indicated; that this is possible without even taking a single car out for a test spin or by poring through which car has the highest top speed, or best acceleration and handling.

The Autovista mode on the surface is comparable to stepping into a virtual showroom. Gamers are presented with a bare-bones background of a warehouse which offers little detail and flair. To make up for this, Microsoft instead spent a significant amount of time and a remarkable amount of detail on the cars themselves. The car taking center stage at X'11 was the 2011 Ferrari 599 GTO and its display in Autovista may leave you breathless regardless of your affinity to luxury cars, or racing video games.

What makes Forza 4 standout from its predecessors is its affiliation with the BBC's Top Gear. Car junkies worldwide should find this reason enough to take a closer look at Forza 4 but for the rest of us who differentiate our cars by colour and size, Autovista will serve as your teacher. Gamers have the opportunity to explore each car inside and out, and this is not an exaggeration. Autovista allows you to literally go inside the car to see its interior. The amount of detail is truly a sight to behold as the steering wheel, seats and dashboards all glisten thanks to a new lighting engine that accentuates the car's lesser appreciated features. Gamers can also take a closer look at exterior of the car from a variety of angles. The gearheads among car junkies can pop the hood to see what's inside or by the press of a button "explode" the car, opening up all its distinctive components. While one is exploring certain sections of the car, they will notice a variety of access points that are just asking to be clicked. Herein lays car education 101.

With the aid of Top Gear's Jeremy Clarkson, gamers are given an oral edification that provides a detailed background, highlights, and other tidbits of the car under inspection. Added to this, Clarkson's sharp wit with comedic timing and delivery provides the kind of narrative you'd expect to see in a game with an engrossing plot and memorable characters. Not bad for a game whose plot revolves around getting from point A back to point A (or from point A to point B) and where the stars of the game are cars that do all their talking figuratively on the race track. About the only thing missing from Autovista is the beautiful model that comes with the car. Forza 4 pushes the Xbox 360s graphical capabilities and the result is some absolutely stunning automobiles. This is also most likely the closest many people would get to drive a 2011 Ferrari 599 GTO unless you or someone you know has $250,000 lying around.

While the focus of the Forza 4 demonstration was Autovista, a separate 2-lap racing demo was also playable. Among the cars available to take for a spin were the aforementioned 2011 Ferrari but also a 2011 Subaru Impreza WRX STI and a 1970 Mercury Cougar Eliminator. The track in which to cruise on was the Swiss Alps which provided a beautiful view of the mountains along with houses dotting the landscape and gondolas travelling along overhead. Forza 4 plays very much like its predecessors. It includes recognizable assisting tools such as the track arrows which identify the best sections to navigate on the track as well as the option of having the AI assist in making smoother turns to keep the car from spinning out of control. Gamers can choose to drive from a variety of different views. For those that choose the inside of the car view, they will get a better look at the extraordinary detail that was stationary in Autovista mode. Cars jostle and show wear and tear upon hitting one another or driving directly head on into the track walls.

Microsoft provided little information beyond Autovista but gamers can be assured that Forza 4 will have Kinect compatibility. There will also be roughly a total of eighty manufacturers represented as well as multitude of gaming modes including both standard racing and community modes. The career mode was mentioned as being start location based, wherein gamers will compete in a number of races which when completed opens up other races for gamers to test their mettle. These races include staples such as drifting and standard racing as well as Top Gear featured tracks. Online gaming will allow for up to sixteen players and the storefront and auction house will allow for selling, purchasing and trading of cars. The rival mode lets gamers compete against one another to see who can establish the best times. If a time is beaten, the original record holder will be notified when and who established the new time and be given the opportunity to hop online to reclaim what was once theirs. This is sure to keep friendly competition lively between gamers. Finally Forza 4 includes an affinity system where it keeps track of what cars are in a particular gamer's collection. If a gamer shows a preference to a particular brand, the game will structure rewards that should appeal to the gamer such as unlocking additional cars in that respective brand. There will be no shortage of incentives for gamers to build and/or diversify their virtual car collections.

As far as exclusive titles go, Forza Motorsport 4 looks like one of the most visually stunning games on the Xbox 360. The Top Gear affiliation and Autovista only enhance a stellar and formidable racing experience. On October 11, gamers will finally get the opportunity to start their engines up for another tour de Forza.