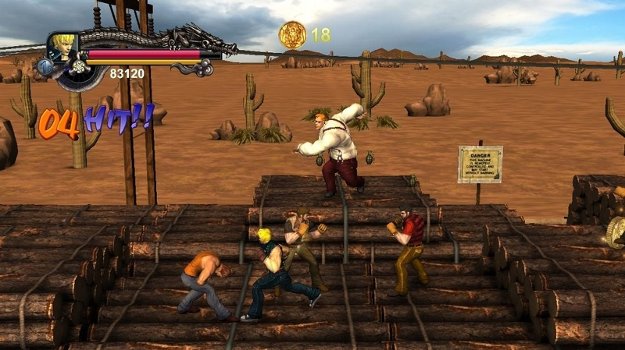 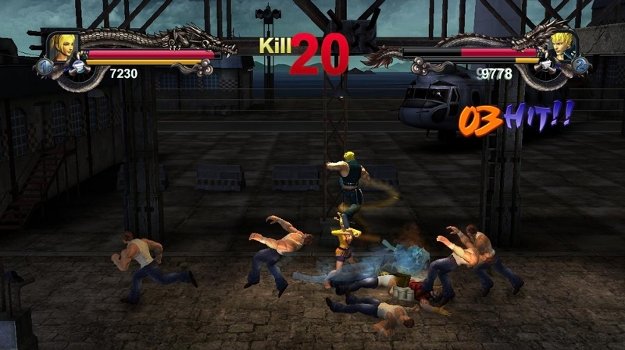 If a stupid sounding subtitle was the most of this game’s problems then things wouldn’t be so bad but the overall rating is a culmination of so much more. Wander of the Dragons succeeds only at burying the beat ‘em up genre almost as badly as it tarnishes the Double Dragon series. Coming on the heels of the passable Double Dragon Neon which was previously released on Xbox Live, Wander of the Dragons shows its shortcomings after the gamer selects their Lee Brother; Billy (ne Bimmy) or Jimmy. 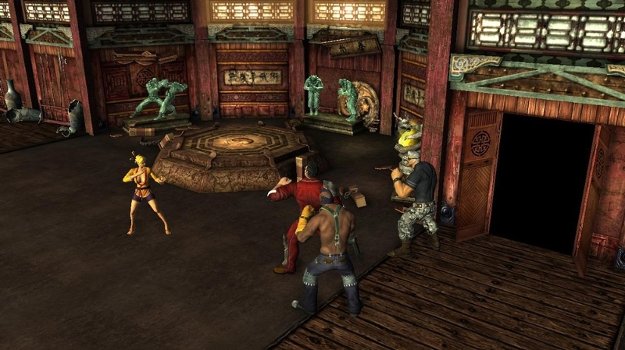 Wander of the Dragons throws gamers into a half-baked tutorial featuring Marian, the girlfriend of Billy (or was it Jimmy)? In any event, gamers learn what martial arts skills are at their disposal; a combo of punches, a combo of kicks, a sorry excuse for a block, a fairly useless evasion maneuver, and some special moves dependent on one of four coloured Dragon orbs that are scattered throughout the Story mode’s fifteen stages. Smashing these orbs serves two additional purposes; it produces a small area attack and refills the health bar completely. The tutorial is almost laughable in its execution. It has a little bit of everything to bring a game down. Narrator who seemingly phones it in and ignores the on screen subtitles? Check. Omitting some additional techniques that gamers can utilize including an elbow attack, and picking up weapons? Check. Making the AI as watered down and idiotic as possible? Check. Having slowdowns along with graphical glitches and cropping issues? Check, check and check. Keep in mind this is still only the tutorial. Once things with Marian end and spoiler alert, they don’t end well, the game starts with Stage 1. This is also roughly the same time Wander of the Dragons drags gamers into the depths of gaming purgatory thanks to abysmal and irresponsive control.

While pressing X (to punch) or B (to kick) repeatedly isn’t difficult, gamers will notice that the delivery of their actions are a step or two slow. Compound this with AI that beyond the easy difficulty will double and triple team the hapless Lee brother(s) draining the health bar in quick order. Sure gamers can hold the right trigger with either attack button to unleash a matrix style punch or kick but unlike in the movies, this extra move often misses the enemy, sometimes hilariously badly. While the AI in the tutorial stands around waiting to be pummeled, out in the real world that is the actual game, the AI will show some degree of competent artificial intelligence. However this is supplemented with them being given a rather unfair advantage in the form of combo breaking. Gamers can parry AI attacks with a well-timed block but once a combo starts up, the AI can and will counter mid pummel and start their own combos that gamers will find themselves powerless to stop. Many of the baddies take a wealth of hits before they flicker and disappear. Before this can happen, most of them will emphatically kip up after being knocked down over and over again. Usually this is accompanied by a recovery attack that will ground a Lee brother instantly let alone stopping any momentum. It is a sad state of affairs when gamers will be looking to lose a life because the best attack in the game is their own recovery attack which is the only thing that does significant damage to the AI.

It is offensive that gamers need to rely on dying to get ahead. They have twenty continues to get as far as they can but even with all the first-aid kits (which heal maybe 15% of the health bar), Dragon orbs, and extra life tokens spread out sporadically, the health bar will continue to drop at a consistently alarming rate. Mercifully, Wander of the Dragon allows gamers to choose which completed stage to start at once they run out of tokens. Whether the gamer would even want to pick up where they left off is something else entirely. Gamers can amuse themselves with other modes of play such as versus and survival if they so desire and a dozen achievements to get for the completionist types. Gamers can also actually do something more constructive with their time and pick another game to play all together.

For those who are don’t let lousy controls and frustrating AI get them down then the visuals of Wander of the Dragon should do the trick. The male characters look like they are on steroids which are accentuated by their wooden and sluggish movements. It is doubly disappointing seeing Double Dragon regulars under the Wander of the Dragon facelift. William, who is infamous for punching Marian in the gut in the original Double Dragon and cartwheeling his way into battle in Double Dragon 2: The Revenge, now looks like a muscle bound Justin Bieber. Staple Boss Abobo goes from being the recognizable albeit misunderstood giant to something reminiscent of what he looked like in that dreadful live action Double Dragon movie. Worst of all would be the token female thug in the series Linda Lash’s transformation from a purple haired whip wielding babe, to a Mohawk dewed, halter top wearing babe with one arm to looking like what can politely best be described as a hooker or perhaps a stripper policewoman. Had the in game graphics looked anything like the comic book style artwork done in the cut scenes, Wander of the Dragon would have gotten a pass in the visuals department instead of a curb stomp. 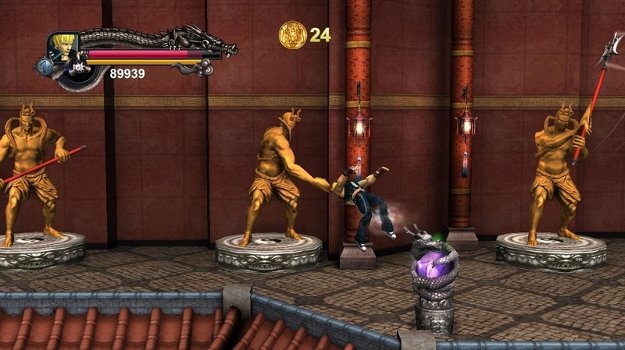 While each stage looks different, the backgrounds don’t do the game any service when things grind to a halt and those graphical glitches and clipping occur just like during the tutorial. Most humorous of these instances is on stage 8 where most of the action takes place on a moving truck. Enemies who get beaten off the truck will stay suspended in midair like a Bugs Bunny cartoon before falling to their death. What gave the original Double Dragon games such charm were the numerous environmental situations where gamers and baddies alike could be defeated, whether it was falling off of cliffs, into pits, water or onto spikes Wander of the Dragon requires gamers to mostly punch and kick the bad guys into oblivion.

Sure it easy and somewhat therapeutic to continue kicking Wander of the Dragon while it is already down, there is one singular item that actually was not butchered in this game and that would be the audio. Just about everything gamers remember from the previous iterations makes it way over and much of it sounds pretty darn good. Heck, having the music playing while doing anything else would still be more fun than actually playing Wander of the Dragon, even getting a full body waxing. (Disclaimer, this reviewer takes no accountability for any actions and results carried out based on the aforementioned suggestion).

Since this is a terrible game, one cannot waste valuable space trying to give Wander of the Dragon any glimmer of hope that it is worth anyone’s time. So this review will conclude by noting a glaring omission. Wander of the Dragon did not allow for online play which is perhaps a blessing in disguise. At least when playing remotely with a friend, gamers will know the person they are punishing, alienating and ultimately defriending.

Being a fan of the Double Dragon series made playing and reviewing this game incredibly disheartening. Double Dragon 2: The Revenge on the NES was an incredible albeit modified port of the arcade original and it is a shame that every Double Dragon remake tries to copy the arcade versions as opposed to the home ports. Had this been a faithful update of the NES edition then perhaps Wander of the Dragon could have been the title to bring a new generation of gamers into the wacky world of beat ‘em ups. Unfortunately Wander of the Dragons with its myriad of problems will likely have an inverse effect; steering gamers away from beat ‘em ups and quite possibly video games all together. Make no mistake, Double Dragon 2: Wander of the Dragons is a ground breaking title but for all the wrong reasons; how to make a terrible, unplayable video game and single handily kill a series that truly deserves much better.