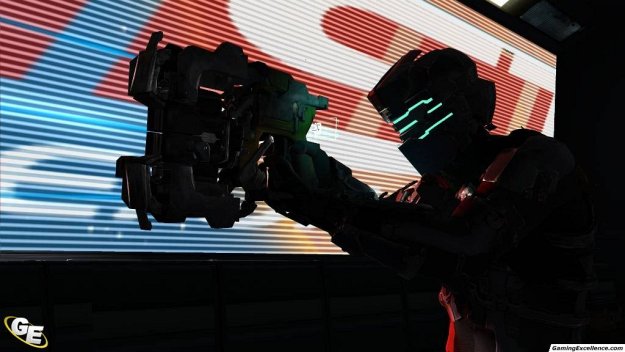 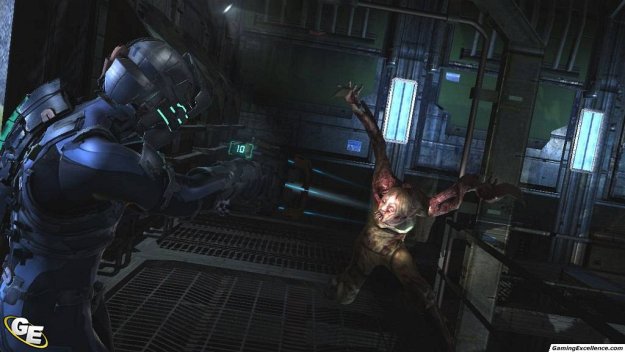 Call me a sucker for the frightening, the macabre, the disturbing. Just don't say I have bad taste in gaming, because the original Dead Space was one of the freshest and most terrifying games I've ever had the privilege of playing. Now, two years later, the sequel is finally here. Is it the bloody shot in the arm the first one was, or have the vicious necromorphs run their course?

Pity poor Isaac Clarke. Everyone's favourite interstellar engineer has been through hell and back during the events on the Ishimura during the original Dead Space. For those who haven't played the original, I'll try and catch you up without too many spoilers. Isaac and his crew were on their way to fix a broken comm link on an interstellar mining ship known as the Ishimura. Of course, things fell apart very quickly when the crew was transformed into blood thirsty mutants known as necromorphs. The necromorphs are essentially space zombies that have razor sharp blades where their appendages used to be, and come after our hero with reckless aplomb.

Throughout the events of the first game (and the Wii side story Dead Space Extraction), it is revealed that the necromorphs are the result of a relic known as the Marker which was found on the surface of Aegis VII, the planet that the Ishimura was mining. Where did the Marker come from? Who is responsible? Dead Space 2 deals with these questions that were answered in the first game, and explored further in this instalment. Dead Space 2 takes place two years after the original game in a city known as the Sprawl, a massive city on one of the moons of Saturn. The necromorphs have overtaken the station, and only Clarke and a few select survivors are fighting for their survival. Without giving away too much, Dead Space deals with some heady themes that are rare to see in the survival horror genre like the folly of blind faith, love, and what sanity truly means. Okay, the last one has been played out a bit at this point, but Dead Space 2 treats the player's intellect with respect, and tells a strong and unsettling story over its ten or so hour campaign.

But, let's be real here. You play Dead Space to be scared stiff and to see some entrails. Dead Space 2 is not for the faint of heart. This game is absolutely gruesome, and the necromorphs are a terrifying and disturbing enemy. Dead Space's unique hook is that enemies must be dismembered. Shooting them in the head or the body will only waste ammo and make the enemies faster and more dangerous. Blowing their limbs off is the only effective way to keep them down for good. And boy does it show. Limbs, heads, it all gets blown apart in disturbing detail, especially when you die yourself. It's clear that Visceral Games put a lot of work into the hundreds of different gruesome ways to die in this game. From getting sliced in half slowly by an airlock door to getting graphically disembowelled, you will get nearly as well acquainted with Clarke's insides as his outsides. I played this game with my significant other and she felt sick to her stomach after only a half hour of play. Even with my desensitization from years of gaming, I found myself feeling a little sick and uncomfortable at what I was doing and playing too, but definitely not enough to stop.

The gameplay will be instantly familiar to anyone who survived the harrowing corridors of the Ishimura. The game is played mainly from a tight third person perspective, like you're closely following Clarke. At its heart, Dead Space is a linear shooter, but with a plethora of unique weapons at your disposal that will already be familiar to fans of the first. Since Clarke is an engineer, most of the weapons you'll wield are actually improvised mining weapons like plasma cutters, line guns, flame welders, and my personal favourite, the ripper (which launches saw blades in front of you for easy dismemberment.) I'm still waiting for one of the games to have those chainsaw lightsabers from that awful Dead Space movie. Actually... maybe not.

Since the necromorphs come from every angle in the darkness, it's fortunate that Clarke can slow his enemies down with his stasis module and use a telekinesis-like kinetic module. Since ammo is scarce as well, you'll find yourself using your kinesis quite often to hurl objects at great speeds. A quick dismemberment of a razor sharp necromorph's arm makes for a pointed way to do some real damage to your enemies.

The enemies are more varied than the last title, and more unsettling than ever. You'll find necromorphs that run right at you, launch projectiles from a distance, explode when they get too close, release small parasites when they die, while others (who are represented by mutated children and babies no less) will overwhelm you with sheer numbers. Using the right weapon and strategy against the right adversary is the key to victory.

The action isn't perfect though. There are sections where Clarke must survive a constant onslaught of enemies in pitch black settings from every angle. Since your enemies are popping out from wall panels and air ducts all around you, there are no safe spots to speak of. The key to success is to juggle your weapons, reload effectively, and use every power you have at your disposal. Even then, there will be a few frustrating moments that will have you cursing the TV, especially at the higher difficulties. There's a few battles of attrition that sometimes make the pace drag in a few spots as well.

In between the corridor shooting, there is some solid puzzle solving to encounter here. Dead Space 2 features a hacking minigame whenever you need to manipulate in-game electronics that will be instantly familiar to gamers who have experience with Batman: Arkham Asylum, Mass Effect, or BioShock. The hacking usually has you finding sweet spots by moving the analog stick slowly in a circle. They're quick, and you sometimes have to do them under fire. It doesn't wear out its welcome, but it's nothing terribly original either.

The better puzzles come when you have to head out into the vacuum of space or zero gravity chambers across the Sprawl to make repairs. In the first game, the zero gravity chambers had you sticking to the walls in the given chamber or magnetically attached to the hull of the Ishimura. This time, you're given full 360 degrees of movement, much like the classic shooter, Descent, albeit at a slower and more methodical pace. These sections control very well, and the puzzles you have to solve in zero gravity feel organic and well thought out, as do the exciting zero gravity boss battles.

There's also a few RPG lite elements to contend with, ensuring that Dead Space 2 isn't just an average shooter. Searching every nook and cranny will yield credits and power nodes that allow you to upgrade Clarke's suit and weapons. There's way more upgrades than nodes in the environments, making for some tough decisions about whether to increase your health, air supply, or the power of your weapons.

Dead Space 2 also includes a multiplayer mode that is fun, but ultimately an unnecessary addition to the franchise. The multiplayer is played with four players per side in all-out humans versus necromorphs duels in five different objective based modes. Usually the objectives for the humans are things like assembling a bomb, or simply to survive by making it to an escape pod. The necromorphs, well... you can guess what their objectives are. The necromorph's side allows you play as various different varieties, giving the multiplayer a unique hook. Unfortunately, since we reviewed the game before the actual release date, we can't comment on how well populated the servers are. A now standard levelling system is also included to give players perks and a sense of progression.

A bonus for PlayStation 3 owners is the inclusion of Dead Space Extraction, the former Wii-exclusive pseudo rail shooter, now re-mastered in glorious HD. Extraction was great when it came out on the Wii, and it remains a worthy gaming experience a year later, especially when played with the PlayStation Move. Considering we gave the original game a 9.2 score only a year ago, this is one of the sweetest pack-in deals you're likely to find. Playing Extraction cooperatively with a friend is also more compelling than the included Dead Space 2 multiplayer.

It bears mentioning that Dead Space 2's presentation is absolutely top drawer. Like the original, there is no HUD to speak of, and all the necessary information like health, ammo, stasis and oxygen levels are all either displayed on Clarke's suit or projected directly in front of him, which is great for immersion. The environments are also far more varied and disturbing than the metallic corridors of the Ishimura. During your travels in the Sprawl, you'll find yourself in a church of Unitology (the cult that worships the Markers and desires convergence as the necromorphs, a less than sublte but well deserved jab to scientology), a decimated daycare, apartment complexes, the inner workings of a giant AI construct, and much more that I dare not spoil. Getting lost is never really a concern, as a click of the right analog stick will place a line on the ground to your next objective.

No game on the market today uses sound as effectively as Dead Space. If you're not playing this with a full surround sound system, you're not only missing out, you're actually making the game more difficult by not knowing where enemies are coming from. The bone chilling atmosphere is very effective due to the excellent sound design that has you questioning what you heard or didn't hear. Isaac Clarke and crew are also excellently voice acted, which is a surprise considering Clarke's silent protagonist status in the original.

In the end, it's a little hard for Dead Space 2 to live up to the breath of fresh air that was the original game, but it manages to follow the same path exceptionally well. Sure, it's not as groundbreaking and shocking as the original was upon release, but the sequel is a tighter, more focused, and scarier excursion into the unknown void of space. What else are you waiting for? You're not scared are you?