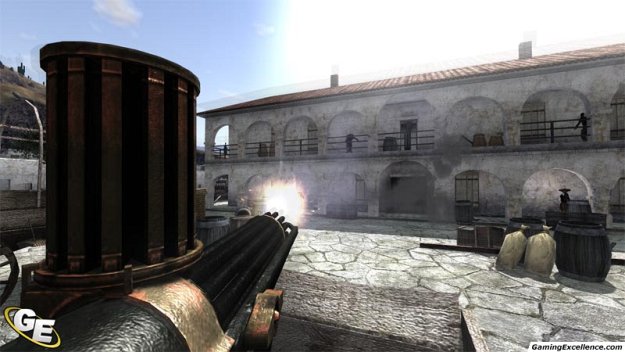 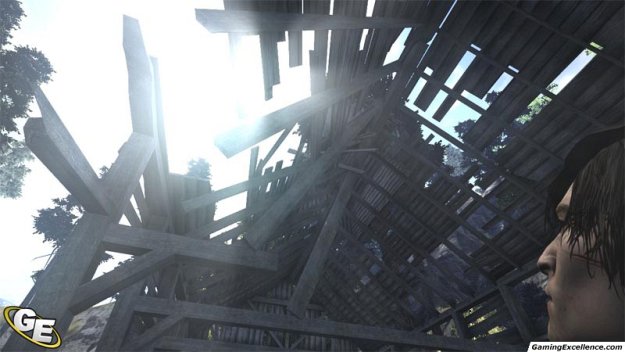 Ah, the old west; a tried and true tradition that has given us some of the most memorable films in Hollywood's repertoire. Since the video game industry seems to emulate a lot of Hollywood's moves, it's rather shocking that the old west isn't a more common theme in video games. The first person shooter genre in particular is ripe for some rootin' tootin' gun slinging action. With the massive amounts of World War II, Sci-fi, and military based shooters on the market today, it's about time that we're given a new setting to blast away in. Enter Ubisoft's new FPS Call of Juarez, the second western themed shooter on the Xbox 360 (the first being Activision's GUN). While the title would suggest a Call of Duty clone set in the Old West, Call of Juarez is a more cerebral, methodical approach to the first person shooter.

Throughout the course of the game, you play as Billy Candle and Reverend Ray. Having dual protagonists in the game allows for a deeper storyline that is presented from two very differing points of view. Billy is a misunderstood vagrant who comes from Spanish and Native descent. Billy is on his way to visit his parents when he finds them slaughtered in cold blood. No sooner than he arrives on this grisly scene does his uncle Ray spot him standing over the corpses. Billy flees the scene and Ray vows holy revenge upon his brother's murderer, whom he assumes is his nephew Billy. Ray in particular is a bible-thumping psychopath who believes that he is a divine angel of death, destined to deliver divine justice at the end of his six-shooters. The rest of game has Billy on the run with Ray hot in pursuit, with a legend of buried Aztec gold thrown in for good measure.

The two characters vary more than just in demeanor and storyline. The two characters play fundamentally differently. Ray's levels are usually straight up blast-a-thons that have you whipping out your six shooters and delivering holy justice unto the many sinners that populate the Old West. Billy, on the other hand, relies more commonly on stealth and environmental puzzles to avoid conflict. Billy isn't defenseless either, as he commonly wields a bow and arrow and a whip.

Generally, Ray's levels are far more entertaining than Billy's. Billy's levels involve a lot of jumping puzzles and crate stacking in order to navigate the environment. With the exception of the Metroid Prime series, platforming in first person has never been a whole lot of fun, and Call of Juarez only serves to strengthen that theory. The game uses an extensive physics engine that allows for destructible environments and realistic object interaction. However, the physics commonly go wonky when you're trying to stack crates one on top of the other, resulting in goofy glitches, clipping errors, and frustrating gameplay. Ray's levels ignore the crate stacking for the most part, as Ray doesn't even have Billy's ability to climb objects. Further compounding the frustrating Billy levels is that he commonly uses a whip in order to latch on to branches and swing over towards his next objective. The problem arises in that you have to be far too precise in your aim to latch onto the branches, which results in many cheap deaths when a dozen enemies are all firing six shooters into your backside. Once the whip is actually latched on, the swing mechanic is extremely poor, resulting in even more cheap deaths. The problem is that it's nearly impossible to get any momentum going on your swing, which means making the jump is more of a matter of luck than timing or skill.

As stated above, Ray's levels are all about shooting first and asking questions never, while Billy relies on stealth. The stealth sections play a lot like last year's Far Cry Instincts. Billy can hide in bushes and shrubbery in order to conceal himself, but the enemies are far too aware of their surroundings, and one misstep will bring dozens of banditos down on you. At least when stealth fails, Billy can activate slow motion with his bow and arrow and take out a few enemies at a time.

Ray also has access to slow motion devastation, and it makes for some of the most entertaining moments in the game. When Ray holsters his six shooters he charges up a concentration mode. With concentration mode active, Ray will whip out his dual six-shooters and two cursors will slowly make their way from the bottom corners to the centre of the screen. Therefore, it's possible to take out four or five guys at once before they even get a chance to pull their pistols out. Ray also has some quick draw challenges that are fun despite the somewhat clumsy controls that require you to pull down and then up on the right analog stick once a timer ticks down to zero; and no, you can't be dishonorable and draw before the timer ticks down.

Weaponry seems to be an accurate representation of turn of the century firearms. You're given access to the standard pistols, accurate rifles, sniper rifles, gatling guns and my favourite; the double barreled shotgun. Ray also has access to a bible which can also be used as a weapon. With a push of the "bible-button", Ray will read passages out loud, causing your enemies to pause and listen for a moment, giving you a prime opportunity to cap the poor sucker. The inclusion of the bible is an original and more than welcome addition to the arsenal. I absolutely love the irony of using religion as a weapon.

Multiplayer is your standard assortment of deathmatch, team deathmatch, and a few objective based modes. Nine out of ten times I joined an existing game I was thrown into a standard deathmatch. I never had too much trouble finding a game, and the servers are well-populated as of this writing. I encountered some significant lag in some of the games I played, which makes aiming with some of the old style weapons annoying. These weapons demand pinpoint accuracy, and when someone is jittering in and out of your crosshairs, it makes you long for the stability of the single player game. This isn't to say every match is lag-tastic, but it happened a bit too often for my liking. At any rate, it's doubtful the multiplayer game will keep you riveted for long. The game only supports system link and Xbox live, no split-screen to be found here.

Visually speaking, Call of Juarez is a mixture of Good, Bad, and Ugly. I am well aware that this pun has more than likely been used in other reviews, but it's an appropriate description nonetheless. Call of Juarez features some wide and sweeping vistas that convincingly unfold before you. The game seems to be using the Far Cry Instincts engine, which means that you're getting an awesome draw distance and some phenomenal looking water effects. From afar, the environments look simply spectacular. Once you start getting closer up to objects, do the textures get a little muddy, but not nearly as bad as they did in Far Cry. The game also has some occasional and unfortunate clipping errors, mostly due to the wonky physics engine.

Character models are also a mixed bag. The characters sometimes animate robotically, which makes for an extremely awkward look, especially during cinematics. If you happen to catch a glimpse of your own character's shadow or look down at your feet, you'll notice that your character animates a lot like those nutcracker soldiers you see in store windows at Christmas time. The character models are least high polygon, smooth renders, with pretty decent facial animation. In all, there are better looking 360 games out there, but this one more than holds its own. This is definitely the best the Wild West has ever looked in a video game.

Call of Juarez features some fantastic audio. The voice acting for Billy and Ray are both very solid, with only occasional drops into cheesy goofiness. Since the story for the game is so gritty and serious, getting the voice acting right was absolutely essential. The supporting cast does a convincingly fine job too. The game fully supports Dolby Digital 5.1, which captures every gun shot, explosion, train whistle, and horse gallop with excellent bass and fidelity. This is definitely one that you'll want to crank up.

Take two doses of Clint Eastwood badassness, a great Old West story, a slight bit of cheese, and the occasional frustrating misstep in level design, add them all together and you have Call of Juarez in a nutshell. The game's high points will be more than enough to keep you gaming during the boring and frustrating portions, and you'll be rewarded for your patience with a strong and compelling journey through 1878 Texas. Besides, aren't you tired of shooting aliens and Nazis yet? Gunslingers, your game has arrived.