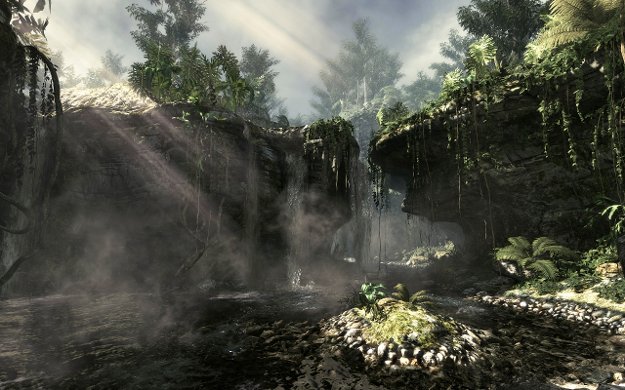 There’s something to be said for a game series clinging to what made it popular. Heck Nintendo has basically made a career out of recycling the Mario and Zelda games as much as they can get away with. But there comes a time when some innovation is called for, when a game series needs to do something fresh and new. This is probably something that Infinity Ward really needs to take to heart.

Previously the Call of Duty series had life breathed into it when Infinity Ward released Modern Warfare. Then Treyarch came along, releasing the mediocre World at War before really knocking it out of the park with the two Black Ops games. But while Treyarch was getting better with every game, the only thing Infinity Ward had to add to the debate was a pathetically blatant grab for attention they called No Russians and an insanely forgettable third game in the series that felt like an expansion pack.

With Ghosts, Infinity Ward has a chance to reclaim the mantle of Call of Duty. To yank it out from under the upstarts at Treyarch. To become a top-tier developer again without the old studio heads there. But it doesn’t really manage to accomplish this, mostly because of the apparent dedication to not stepping too far outside of the comfort zone established by Modern Warfare. But that’s enough complaining about the politics behind the game itself. Call of Duty: Ghosts, for all of its problems, is a pretty damn solid gaming experience. When the worst thing that can be said for a game is that it doesn’t tread any new ground then that’s a pretty damn good situation.

As much as Ghosts seems like it should be related to Modern Warfare, what with Ghost being a squaddie from MW2, it’s actually a stand-alone game. Set in a future where the United States has been torn asunder by an invasion from a South American coalition known as the Federation. With a war still going on between the U.S. remnants and the Federation, who now occupy some parts of the Southern United States, Logan Walker and his brother Hesh end up on the front lines, fighting for their lives and that of their countrymen. Upon being inducted into the mysterious badass squad known as the Ghosts they find that the Federation has a new weapon up its sleeve, a weapon that might spell the end of the Ghosts and the U.S. altogether.

That’s about the only part of the plot that really means much of anything. The rest of the game is just a bunch of Michael Bay-esque set pieces that go from one gun fight to another explosion, repeat until credits roll. That sounds like a criticism but it honestly, truly isn’t. When I sit down to play a military shooter like this I’m not looking for sloppy attempts at being gritty, I want to see stuff blow right the hell up. That’s what you get from Ghosts. Want to have a gun fight in space? We’ve got those. An underwater segment where you dodge sharks, depth charges and three-dimensional gun fights? There’s one of those. A stealth section with a player controlled dog murdering folks? Loved that one. My personal favorite segment sees you flying towards an oil refinery, bombing enemies as you go, then swapping down for some ground level gunfights that culminate in besieging an oil platform. It’s epic and awesome. 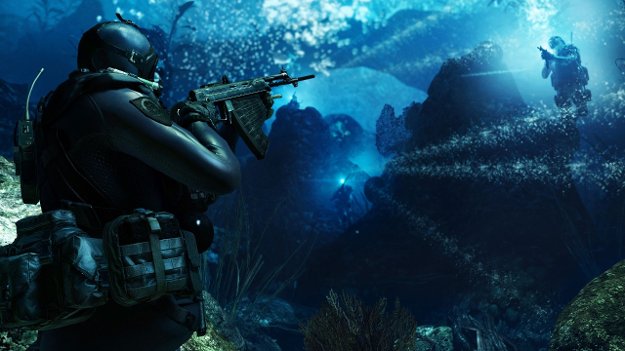 Sadly while the events that occur are awesome the story is some hack level writing. It basically reads like a Call of Duty fan fic with some super, duper, mega-awesome soldiers who can take out entire military compounds with a four man squad with an even yet more super awesome bad guy who is basically indestructible and always one step ahead of the heroes. It’s pretty lame, predictable and leads into an ending that basically has “To be continued…” stamped right onto it. That’s just embarrassing.

Being entirely honest though, there’s a huge group of people who will barely even glance at the campaign, jumping straight into the multiplayer. It’s not really a terrible idea if you’re looking to move on to the next game in the series. While the basic game plays just like every other game in the series there are a number of changes that really make the experience feel different.

Most notable is the amount of customization available to the player. There’s a wide range of customization for your avatar, going from gender to armor types. Then you can fully change up what weapons or equipment you’ll be bringing out into the field. But the most important thing is the ability to customize your killstreaks. They come in three flavors: Assault, Support and Specialist. Assault killstreaks require constant kills and no deaths while giving you extra ways to kill opponents. Specialist streaks are earned the same way but grant bonus perks, although they can be lost if you die. Support killstreaks are my personal favorites since they aren’t lost when you die and grant boons to your whole team, greatly increasing survivability. 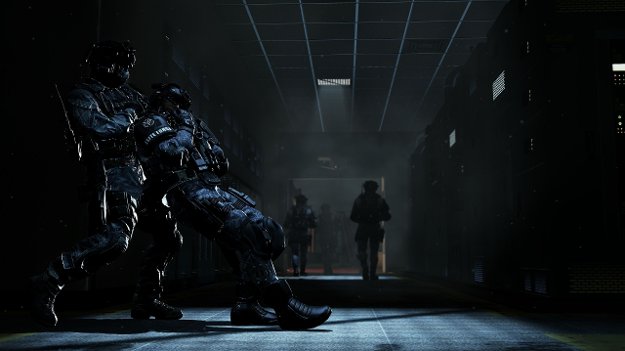 But once again misfortune comes to hump Ghosts leg, this time in the form of respawn and map issues. First off, the maps feel like they’re just a bit too big. If a few too many people start camping out you can really go long stretches of time without a fight. It’s likely that the maps are balanced for the larger game sizes on the next-gen consoles (6 more players in a game) so there’s a certain feeling of emptiness if people aren’t constantly on the move. Honestly though, you won’t even notice this while you’re busy cursing over the blasted respawn issues. What respawn issues? Well, the respawn points are seemingly very limited and this is the first shooter I’ve played in years where I was literally spawn killed repeatedly in multiple games.

It didn’t take very long for me to abandon multiplayer and spend the rest of my time with the brand new four-player Extinction mode. While Treyarch’s games introduced the much loved Nazi Zombies mode, it’s hard to say that the mode isn’t getting repetitive at this point. So Infinity Ward has stepped up and delivered a helluva replacement, one that sees you battling various monstrous aliens as you try to fight your way to their main hive to knock it out of commission.

As opposed to Nazi Zombies here you have a lot to work with. There’s experience gained by killing enemies that levels you up to allow access to new classes and a wide variety of equipment. Each class has its own benefits to the player and / or his team, so a weapon specialist does more damage with guns but a Medic helps his whole party regenerate health faster. Give it enough levels and you’ll get some really awesome stuff to use like Grenade Turrets and Sentry Guns. What starts out tough gets immensely fun / cathartic when you get your hands on some of this higher level equipment.

Playing Extraction consists of carrying a drill to one of the many alien hives, placing the drill so that it destroys said hive and then guarding it while it does its work. You’ll fend off mostly leaping, clawed beats to start with but it gets worse from there. The name “Scorpion” will come to haunt your nightmares until you get some damn good equipment to play with. Get to the center of the location, beyond a few barrier walls, to stop the alien menace with a freaking nuke or die trying. It’s amazingly fun. Honestly the changes here remind me of the leap in quality from Horde Mode in Gears of War 2 and Horde Mode 2.0 in Gears of War 3. One I played a few times and stopped, the other entertained me for over a year before losing interest.

Probably the most divisive part of this game will be the most obvious stuff, the sound and graphics. Sound is only really an issue when it comes to the babbling in the campaign. Somebody hired Stephen Lang to voice the mission control character which was a great idea. But that same somebody hired Brandon Routh, he of Super Returns and is Boring fame, which is a decision that could get you a caning in the right country. Then the graphics are a mixed bag for many since they look fantastic but they don’t compare to the next-gen versions (obviously) and there is some stuttering and frame rate issues that pop up every now and again. But neither of these issues are anything that should stop someone from playing the game if they’re at all interested. 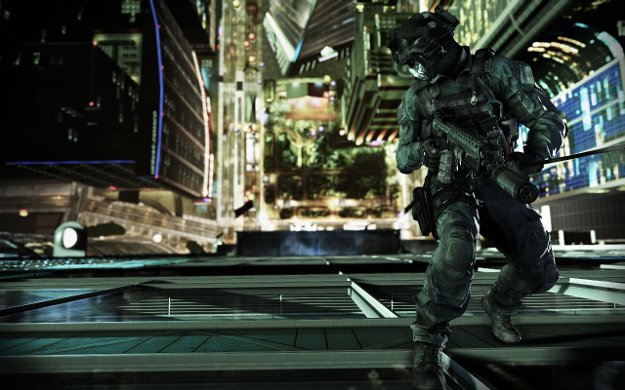 Infinity Ward has consistently delivered quality games but the experience overall has been one of stagnation. Ghosts exemplifies this – you have damn good campaign set pieces, a garbage story, a solid multiplayer experience and then… somehow it all ends up feeling kind of hollow. The only really endearing part of the game package is Extinction mode which I’m sure I’ll be playing for a long time but that’s not leaving a whole lot of game to recommend.