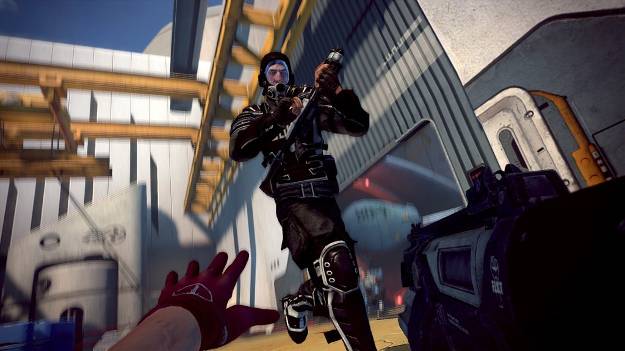 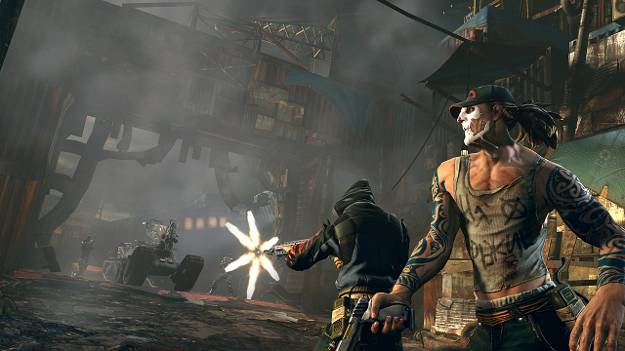 Team based shooters on a console are at a bit of a premium these days. Ignoring team deathmatch games like Call of Duty, which are a dime a dozen, great co-op and versus online shooter experiences are rather limited. In fact, you pretty much have Valve's Team Fortress 2 and Left 4 Dead to get a great objective based multiplayer experience these days. Publisher Bethesda and developer Splash Damage have put in a solid effort with Brink, but a slew of issues will likely keep it from being your go to multiplayer shooter.

The setting in Brink is a floating city far in the future known as the Ark. An artificial city originally designed to house 5,000 quickly swelled to tens of thousands. With contact with the outside world completely cut off, a civil war erupts between a resistance faction and the Ark's security breaks out. As you start the game, you pick a side and get fighting.

When you first start the game, you customize a character and are offered a tutorial. What follows is a 20 minute video that repeats itself quite often and makes the game seem far more complex than it actually is. At its core, Brink is a class based shooter with dynamically changing objectives as matches go forward. The maps are tied together by cutscenes, telling the story as you play with your friends, up to eight a side.

The four classes available are Solider, Medic, Engineer, and Operative. Soldiers can lay down charges, throw Molotov cocktails, and distribute ammo amongst the team. Medics can buff their own health and those of the team and revive teammates. Engineers can lay down turrets and mines, and repair objectives. Finally, the Operative can disguise themselves as enemies and hack certain objectives. A problem arises right off the bat within the character balances. The Medic and Engineer classes are far more powerful than the other two. Engineers are more effective killing machines than Soliders, especially with the weak explosives the game offers. Disguising yourself as an Operative is also useless as you lose your costume the moment you take a hit or fire a shot. Fortunately, classes can be changed on the fly upon respawn or at strategically placed command posts. Also, certain objectives can only be accomplished by specific classes, meaning that a well balanced team is essential to victory.

Another unique hook of Brink is the dynamically updating objectives that change as the level progresses. A handy radial meter will point you to an objective of your choice. A common secondary objective is to capture command posts strewn throughout the levels. By capturing these spots, you can provide buffs to your team like additional supplies or bonus health. Unfortunately, most of the secondary objectives aren't really worth the extra manpower, especially when you have pretty strict time limits to accomplish the primary objectives.

The levels are large and navigation is a snap with the game's SMART system. The Smart system has you pressing the left bumper to essentially parkour run through the levels. By holding the button down, you'll sprint through, over and under obstacles. As fun as the levels are to navigate, they're poorly designed for the kind of gameplay that the developers are going for. Objectives are commonly found is tight chokepoints, and whichever team gains control of the chokepoints will likely take the match, especially when playing with bots. Thanks to this, the game reverts to an irritating system of sprint to the objective, get killed, rinse lather repeat. The system also seems to clearly favour whichever team is defending in most of the levels.

Speaking of frustration, don't bother playing this game in single player. Ever. The AI for the bots in the game are beyond atrocious. They never have your back, even when you're trying to accomplish objectives, and will rarely go for objectives effectively themselves. The bot medics do a decent job of reviving you, but that's about it. Opposing bots will group around objectives they are protecting, creating an impenetrable wall of frustration to deal with. Trying to invade a well protected objective is like trying to invade a bee-hive with your face. Opposing bots also never miss, meaning three shots and you're down, while you can empty an entire clip into them without draining half their health.

Considering that Brink is a title that lives and breathes online, it's even more disappointing that there's an unacceptable amount of lag in the Xbox 360 version. Obviously, with the PlayStation Network down as of this writing, we couldn't test the performance, but it's likely not as good. A day one patch that we tested before writing this review didn't do a whole lot to help the spotty network performance. There's also no split screen multiplayer to speak of. Even if you're considering picking this game up, wait for the PS3 version to be online and check network reports before taking the plunge.

On the plus side, you can unlock tons of cosmetic abilities for your character, allowing you to truly make your character your own. As you progress through the levels, you'll be given loads of different items meaning that no two characters online will be exactly the same. You'll also unlock coins that can be used to upgrade your favourite class with buffs and abilities. In another nice touch, you can also resell and reorganize your upgrades whenever you like.

In terms of artistic merit, Brink shines. The levels are nicely varied, and the Ark is a neat place to explore. The characters are cartoonish and exaggerated, which suits the austenitic of the game well. On a technical level, however, the visuals don't fare well at all. The game inexplicably runs the idTech 4 engine, which powered Doom 3 seven years ago, and the engine shows its age. Textures pop in and out, character animations are weak, and the environments lack fine detail. Voice acting is passable but repetitive.

With a few patches, it's certainly possible that Bethesda will clean up the network problems with the game and it will certainly be worth your time. As it stands right now, with laggy network performance and an abysmal single-player experience, this is a game that will push your patience to the brink. Take a pass, at least for now.