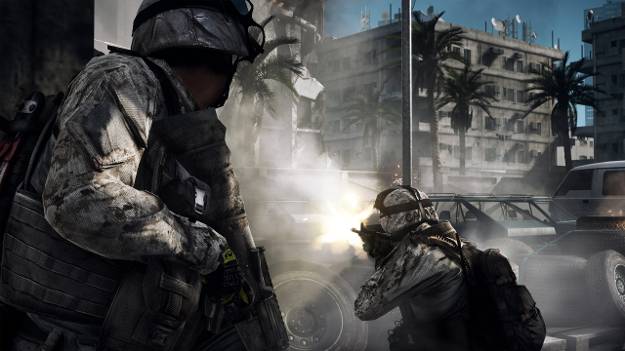 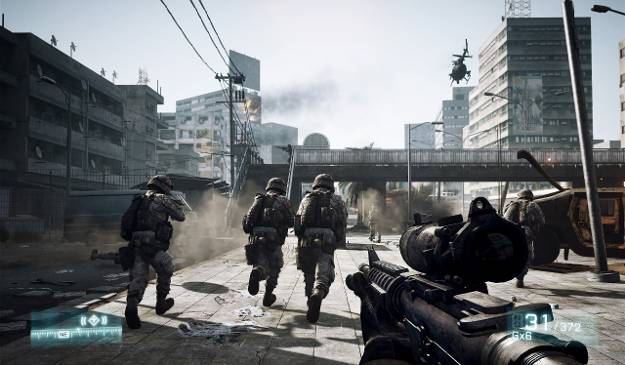 One of the most epic battles in the industry this holiday season is clearly the First Person Shooter battle between EA's venerable Battlefield series and Activision's mega popular Call of Duty franchise. Given EA's audacity to tag the game's ads with "above and beyond the call," EA's opened itself to a level of comparison to Call of Duty, some favourable, some not so much.

If you start with the single player, as I did, you'll be very disappointed with Battlefield 3. While the multiplayer is a fully featured, ultra-addictive suite that can and likely will dominate your online playtime for months or even years to come, the single player is an incredibly disappointing CoD clone.

Starting with the story, it's the same generic military thriller that you've seen in countless movies, books, and games since the cold war. You've got all the requisite plot points: Russian terrorists, nuclear weapons, a globe trotting plot, and some good 'ol American Hoo-Rah! It's boring and barely even relevant to whatever level you're playing in.

While the multiplayer features lots of vehicles to drive and environments to destroy, the single player features nearly none of that. Instead of the wide open battlefields of the multiplayer, the campaign is one linear shooting gallery after the next, replacing any level of freedom with the same quick time events and on-rails sequences you've played a million times. It also doesn't help that the AI can put a bead on your head from across the map when you can't even see them. You'll be spending most of you time behind cover, getting shot the instant you pop your head back out from cover.

I don't know if it's a byproduct of the new Frostbite 2 engine, but the campaign also features a slew of glitches that don't quite ruin the experience, but definitely don't make it any more pleasurable. As an example, I was killed right after a really tough battle because an enemy spawned through an ammo resupply box and stabbed me without me being able to do a damn thing about it. Enemies will commonly spawn through walls and right before your eyes, corpses will twitch and dance around, and there's some nasty texture pop-in, at least on the PS3 version we reviewed.

At least variety is good in the campaign. Throughout you'll be launching mortars into an apartment complex, mowing down shooting galleries, tense sniper hunts, helicopter level not unlike an AC 130 with on rails dog fight. I just wish that most of the vehicle sections weren't on rails and not just you moving a cursor over your enemies and pressing the fire button. It's all over in about 5-6 hours too.

The co-op mode fares even worse. It works as something of a greatest hits version of the single player levels. In theory its like CoD: Modern Warfare 2's Spec Ops mode, but doesn't fare nearly as well. The biggest problem is the fact that the 20-something minute missions do not feature any checkpoints. Whatsoever. There's little more frustrating than having to start an entire level all over again because a stray unseen sniper took you and your friend out, or a random grenade took out the both of you. It also sucks that there's no split screen option.

So I've had a lot of complaints for a game I've scored this high, and the entire package is more than worthwhile by its multiplayer suite. Battlefield 3 is a class and team based shooter. You're given the option to play as an Assault Medic, Recon Sniper, Support Machine Gunner, or Repair Engineer. Each class brings different skills and gadgets to the table, a good balance of which is required for any successful team.

Unlike CoD, in which you're given points to spend however you please as you play, BF3's experience system levels you up depending on how you play. Get lots of kills with a specific gun and you'll unlock scopes and sights for it. Ride around in a tank, helicopter, jet, or truck a lot and you'll unlock extra perks for that specific vehicle. As you play as your favourite class, you'll get more gadgets and guns specific to that class, giving you plenty of incentive to change up or stick to your favourite.

Modes include Conquest, Rush, Squad Deathmatch, Squad Rush and Team Deathmatch. Conquest has you capturing specific points on a map, while Rush has one class defending while the other attacks specific points on the map. I found Rush encourages frustrating camping more than the Conquest mode, but you're bound to find a mode that appeals to you and will get you strongly addicted.

The console versions feature 24 players per match on smaller maps. The PC version features 64 players on larger maps. If you have the hardware for it, the PC version is the best way to go. Just make sure you're playing with a like minded squad and good friends. Nothing is worse than players who go off on their own and ignore the best interests of the team. Death comes quickly to those players.

Glitches in the single player campaign notwithstanding, the new Frostbite 2 Engine is a technical marvel. The level of destruction in the multiplayer is simply amazing, especially keeping in mind the level of detail, crisp textures, and blazing frame rate on display on all three versions. The lighting effects are also phenomenal, and play a huge part in gameplay when they affect your vision, as it does when someone shines a tactical light in your face. Dust and dirt will also obscure the screen as you play.

Sound design is also fantastic, with the sounds of war, bullets, and explosives going off around you convincingly. The script in the single player may be weak, but at least the voice acting is strong.

If you're going solo, leave this game on the shelf at your local games store. However, the multiplayer package available here is literally second to none. Call of Duty's next iteration sure has its work cut out for it.