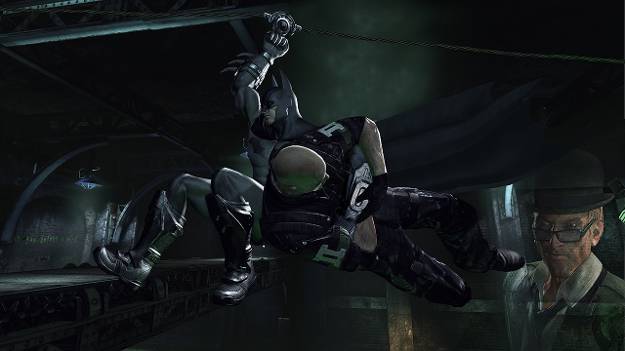 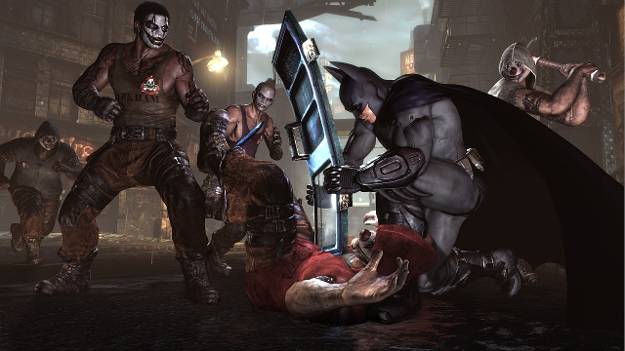 After growing up spending huge portions of my life reading the comics, watching the movies and TV shows, playing mediocre Batman games and even donning a black cowl and cape for Halloween, I think it's safe to say that if I could be any mythological character, it would have to be Batman. Hell, as a Canadian kid, I'd even rather be Batman than Wayne Gretzky, which if you've ever been to the Great White North, you'll know is quite the bold statement. Thankfully, two years back, Rocksteady studios gave gamers worldwide the ability to finally be Batman in what was easily the best superhero game ever created.

Now its sequel is here, and has actually made the masterpiece that was Arkham Asylum obsolete. It's no hyperbole to claim that if Arkham City is not the best action game ever made, it's on a very, very short list for that title.

After foiling the schemes of the Joker and crew during the events of Arkham Asylum, things have gotten far worse for Batman's hometown of Gotham City. Criminal behaviour and the destruction of the Asylum has forced Gotham City officials to cordon off a huge chunk of the city in order to maintain any semblance of peace. This new area has been called Arkham City, a place where criminals are given full free reign as long as they don't approach the heavily armed stone walls surrounding the area. The entire location is overseen by Hugo Strange, a powerful lunatic who wants to initiate a mysterious program called "Protocol 10." Strange knows Bruce Wayne's secret identity and has had Gotham's richest man thrown into Arkham City too. Strange also has a powerful and armed security force protecting him. It's up to Batman to figure out what Protocol 10 is and prevent it from being put into practice, and time is short.

In between the main mission, Batman will encounter tons of his old villain "friends", including favourites like the Joker, Penguin, Riddler, Mr. Freeze, and so on. Those who have delved deeper into the comics will be thrilled to find more obscure villains like Solomon Grundy and Victor Zsasz represented here as well. The storytelling is incredibly strong, and will satisfy any Batman fan.

Arkham City is a big place, but not as big as other open world environments in similar titles. It's definitely smaller than Rome in Assassin's Creed Brotherhood for example. What it lacks in sheer size however, it makes up for in a simply nutty amount of things to do. Beyond the main quest are dozens and dozens of side quests, all of which carry their own sense of urgency as well. This is one of the few open world games I've played where I honestly wanted to do every single mission presented to me. In Arkham City's case, the side quests often yield valuable experience and new, useful gadgets. My personal favourite was a tense side quest that has you jumping from payphone to payphone trying to track down the psychotic Victor Zsasz from maiming hostages. In addition to the side quests, you'll be able to stop random assaults, augment your gliding training, collect and solve Riddler trophies and riddles (which unlock further story threads and audio logs), and even commit stealthy thefts as Catwoman. If that's not enough for you, you'll also given a complete slew of challenge maps to test your combat and stealth abilities outside of the main campaign as well, complete with full online leaderboards.

Gameplay in Arkham City will be quite familiar to those who traversed Arkham Asylum. Batman can navigate his way around the very detailed environments easily by latching onto ledges with his grappling gun and glide effortlessly through the year from rooftop to rooftop. Just the simple act of soaring and parkouring through the environments goes a long way to really making you feel like Batman. New gadgets also let you catapult yourself with the grapnel gun and clear one end of the city to the next quickly, or dive bomb to street level to take out thugs or gain extra speed.

Most situations involving enemies in Arkham City give you the option to take on a group of enemies either stealthily or head on. While most games that give you this option encourage one or the other, Arkham City leaves the choice up to you, and either option is just as satisfying as the other, and more importantly, give you equal amounts of experience for your troubles.

Combat is almost like a rhythm game in a strange way. Timing your punches, counters, gadget use, dodges, stuns, and devastating special moves is key to success. When playing on normal or easy, you'll be given a visual cue to when an enemy is about to attack, which goes away when playing on hard. Every successful move adds multipliers to an ever increasing combo counter. Maintaining a combo well in the 30+ hit range can be quite challenging, but oh my, is it satisfying. It's especially satisfying when you're able to successfully get up that high while mixing in tons of different techniques and gadgets while outnumbered 20 to 1. This game has the best melee combat engine ever seen in a video game, period. It's even better than the sublime Arkham Asylum, Ninja Gaiden, or God of War.

Stealth is more challenging than the last time around, but just as fun. Being stealthy will have you running around in air ducts, grappling to high up gargoyle statues, and silently taking out enemies one by one. This time around though, the enemies are significantly smarter in their tactics. The developers saw fit to give them items like heat vision goggles, heatbeat monitors, and jammers for your detective vision, which is your most essential tool when being stealthy. The brilliant level design and strong AI mean that even the most impossible situation can be navigated successfully, just by observing the situation analytically, which is what the World's Greatest Detective would be doing anyway.

In case you ever get stuck, Arkham City features both an essential detective vision mode and an elegant waypoint system to ensure you never get lost or lack for things to do. Unlike the last game, where detective vision essentially meant you viewed most of the game with a purple filter, the designers have instituted clever tweaks to make sure you can fully appreciate the graphical presentation for what it is. The compass and waypoint systems will only show themselves when in detective vision is turned off, which will also automatically happen anytime Batman gets punched or shot.

One of the sequel's big hooks is the ability to play as Catwoman. Catwoman has her own set of tools and skills like a whip and the ability to climb walls and ceilings. The catch is that you can only play as Catwoman by buying the game new and putting in a single use code. Buying the game used will block out all of her missions. Her missions add some welcome variety to the proceedings, and are well worth paying the little bit extra for the title. The only complaint I have here is that this is one of the first games I've encountered that requires an online update and code to unlock single player content. Owners that aren't connected to Xbox Live or PSN are completely out of luck accessing content that they paid for and should be on the disc to begin with.

Given the rock-solid gameplay on display, it's only fair that Batman's graphical presentation is superb, and second to none in the realm of comic book games. Arkham City is a living, breathing place, packed with details big and small. From the little snowflakes that stick to Batman's cape, to the foggy batsignal shining in the sky, to the animations and unrelated conversations of the thugs at street level, Arkham City is one of the most immersive game worlds I've ever experienced. This really hit home when a security helicopter started following me around and reporting on my every move back to base, even providing a play by play as I beat up a group of thugs on a rooftop. Its little moments like this that makes Arkham City such a masterpiece and the game is packed with unforgettable moments like that, both big and small. The voice acting from Batman veteran Kevin Conroy and Mark Hamill as the Joker headline a uniformly excellent group of voice actors, none of which phone in their lines.

There may be tons of great gaming experiences already released and coming out this holiday season, but there's only one that allows you imitate your lowest, gravelly voice, and genuinely say: "I'm Batman." For that reason alone, this is one game this holiday you simply cannot afford to miss. Arkham City is an unforgettable comic book inspired masterpiece.