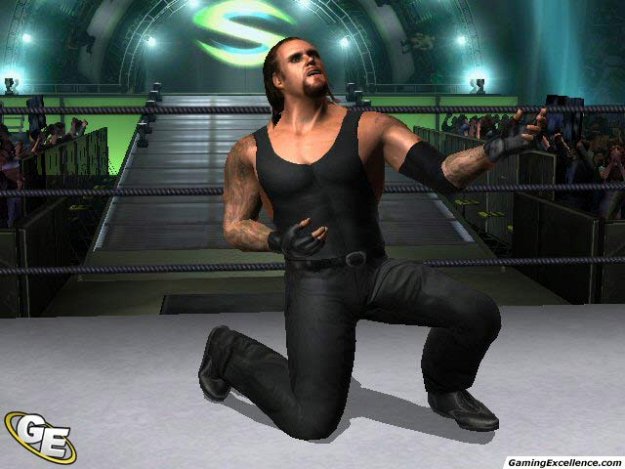 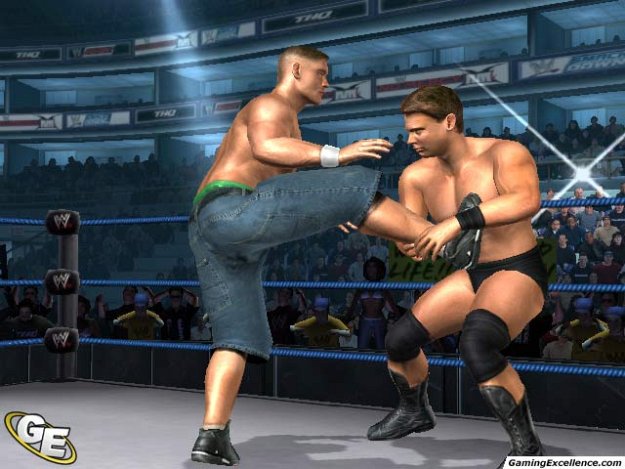 As true as the Madden Curse is a reality, I believe that the Xbox is also cursed with the inability to simply produce a competent wrestling game. Adding fuel to the fire, why does THQ insist on allowing other companies to attempt making WWE games for the Xbox when Yuke's has already perfected the art on the PS2? Just port them over! In fact, even when Yuke's strays from the WWE formula as it did with Rumble Roses, it still manages to make a wrestling game to make others envious. Yes, the Xbox can make games that are pretty to look at, but when will Bill Gates and Company just sign Aki or Yuke's to do the dirty work? As it stands, we have yet another game to puzzle over as we await a real grappler to sink our teeth into.

For the record, WrestleMania XXI is the best looking wrestling game ever made. The screenshots didn't lie and the entrance movies we all watched told the real tale. This game looks the part. While Studio Gigante has yet to make a good fighter or grappler, it did make WM21 look as realistic as can be expected. The wrestlers look eerily like their human counterparts, they walk and wrestle like them and their physical personalities and tell-tale traits are dead on. Yes, die-hards will nit pick about a small detail here or there (Chris Jericho probably) but one look at Triple H's entrance or Batista or Christian in action and you will be humbled by the sheer perfection of the graphics.

And while the graphics may look all that and then some, the game suffers from almost every other conceivable problem known to man. Upon booting up the game you will immediately notice the lag in the menus and long (and unpredictable) loading times. The other initial problem is that while the game auto-saves your progress, it doesn't boot into any particular profile (you must choose it yourself). And so, it's quite possible to play for hours and earn nothing since a profile wasn't selected initially. This is a small irritation I've experienced a few times and one that you will at some point face as well. The menus, for the most part, look quite good if a little sparse. Your initial options are Exhibition, Career, Create, Profiles, Xbox Live and Options. The Exhibition mode offers up the bare minimum of modes expected in a wrestling game as of late: Single (Cage, Hell In A Cell, Ladder Match, Table Match, TLC), Bra & Panties (a mode onto itself!) and Tag (Handicap, Triple-Threat, Fatal Four-Way, Last Man Standing, Battle Royal and Royal Rumble). Don't bother looking for the other gimmick type matches available in every other wrestling game (Elimination Chamber, Hardcore Fights, Backstage Brawls, etc) they are not in this one.

In the Create mode, you will be able to create-a-wrestler (male only; which can be used in career mode, exhibition and on Xbox Live) and create-a-championship. The title/belt creation works fairly well and is a novel idea that every wrestling game should have but the CAW mode suffers a lot when compared to the Xbox's last grappler; RAW2. The barometer used to judge any CAW mode for me has always been the creation of Sting (both Original Sting and NWO/The Crow Sting). So far, RAW2 has set the bar very high. In fact, RAW2's create-a-wrestler mode was so in-depth that it actually kept track of how much time you had spent using it. And unfortunately, while WM21's pre-rendered wrestlers may look amazing, its user created wrestlers don't fare too well. My Sting looked like he had come out of rehab! And not because he was cured, but because they just wouldn't have him any longer. The menus in the CAW mode lag and it's sometimes hard to see what a particular piece of equipment/body part will look like without completely throwing away your current design. Also, don't expect to create too many past superstars either. While the game does contain a large palette of costumes and accessories (more of which can be unlocked) they all seem aimed at creating very specific characters (Mankind in particular and the other "faces" of Mick Foley). As it stands, the CAW mode is not the worst ever created, but it sadly pales in comparison to RAW2 and the two latest Smackdown titles on the PS2. Worse yet, you'll never get your characters to look exactly like you want them to.

Once you have a CAW, the next place to visit is the Career mode. Why? Well, simply because WM21 will not allow you to progress through the story mode using real Superstars. Yes, this is a travesty. I've taken HHH through every career mode known to man in every wrestling game I've ever played. I was simply dumbfounded at this decision but I suppose I understand the reasons. The career mode offers up the story of your CAW over the course of one year. There are no branching paths, no face/heel mechanic, just one story that is enjoyable enough to actually play through more than once. While the story won't win any Academy Awards (there is a redemption angle but the Academy is so beyond that nowadays) it's good and the voice acting is truly enjoyable. Studio Gigante has recreated each personality perfectly and while you may not be a fan of Renee Dupree initially, you will come to respect the "person" when you realize how he can get his personality across with just his voice. In fact, all the voice acting is beyond reproach and it seems like every Superstar that contributed to the mix gave it their all. The announcers, while not always original and timely, are even fun to listen to once in a while. The only problem with the career mode is really your own wrestler's personality. He's just really an ass and it's truly hard to want to play as him early on.

Since I've already commented on voice-overs to an extent, let me add that the entire sound package found in WM21 is competent and exciting. The music, while not always up-to-date, is loud and well recorded (I still have nightmares about the old midi-like Nintendo 64 entrance themes). The announcing is lively and all the Superstars involved give it their all. A few Superstars are missing (I'm not mentioning any names) but they are hardly needed in the story.

So far, so good right? Well, I suppose so if you don't intend to ever "play" the game. The problems start early, like opening the manual. I know it has become the norm with wrestling games as of late to pack as many possible button press options into their manuals without actually telling you how to play the game. WrestleMania 21 is no different. You will find 11 pages filled with every situation you can imagine but it fails to tell you the most obvious: getting up. I've read up a lot on this and tried a lot of various things and here is my advice to you: If you want to get up (and not roll around on the mat like a crazy chicken) learn to counter or wait for your wrestler to stand on his own or simply press the UP D-Pad button. While this last one may not really work, it makes me feel like he's getting up faster and that's good enough for me.

If you intend to enjoy MW21 here are the few concessions you must make/accept: WM21 plays like a simulation; do not expect the quick arcade gameplay of the Smackdown series. WM21 is all about reversals; if you don't learn early on to reverse (don't worry, it's easy) you will be frustrated to no end with this game. The AI is fine when alone but turns to garbage when more than one AI controlled character is present; don't fret, it's still about a million times better than RAW2's AI and your own partner will never try to break your own pins. The refs are stupid; there's no nice way to say this, the arbitration in this fake sport just plain doesn't make sense. You can't take the action backstage; don't even bother trying. The controls take a lot of getting used to; simple things like throwing someone back into the ring can become an exercise in Sainthood. The AI is sometimes very (read: very, very, very) cheap; if you are down, expect to stay down for along time since it almost feels like the AI is performing a 10-combo juggle on you and there's no way to stop it except to reverse it. The game can be very frustrating; while some matches will feel like a real back and forth is taking place and a story is being told, other match types, like the Royal Rumble, can sometimes feel particularly cheap.

For the most part, the grappling engine works well and there are hundreds of moves to perform with each wrestler. And while most of the moves do feel very real and lifelike, some animations seem to take too long. This is most noticeable when you are performing mat attacks on a fallen grappler. At the beginning of the move your character is actually causing damage (a button mashing option appears for your opponent) but once the move's effect is over, your wrestler will continue on with the move for far too long. Also, while you can break certain moves by pressing the Right Trigger, most mat animations cannot be cancelled, which is a pain.

The problem with WM21's gameplay is really that it is a tad too slow and clunky. Little things like having your run animation ended when you make contact with a hard object seem obvious, but in WM21 you can keep running and running until finally you press the Y button again or your wrestler decides to stop, which he will do on his own. The fact of the matter is that WM21 sometimes feels more like a chore to play than actually being fun. There is an intangible missing to the gameplay mechanic that simply makes the title more frustrating than anything else. And while you may play it in the hopes of unlocking the content of the Shopzone (and granted it is the best shopzone I've ever seen,) there really isn't much else to keep you playing unless your friends are over and everyone's into wrestling.

The final mode of WM21 is its online portion. While I won't comment on the whole disc printing error and the recall/exchange of affected games, let me say that I respect THQ for dealing with the situation as well as they did and also Studio Gigante for issuing a patch so quickly to fix large portions of the game (include Xbox connectivity). What effect the knowledge that any Xbox game can be patched after it has shipped will have on future games, I await eagerly. As it stands, the Live portion of WM21 is fairly smooth and the ability to take your CAW and created titles online is fun. At the time of this writing however, there weren't too many people online playing the game.

Is WrestleMania XXI truly as bad as some will have you believe? Not really. If you are well informed and know exactly what to expect from it, it's a title that any wrestling fan can appreciate to a certain extent and take a certain amount of enjoyment from. The unlockables alone are worth getting this title for. But is it worth paying the full price for WM21? Absolutely not! It may be the greatest WWE wrestling game that the Xbox has ever seen and yes, it may stand head and shoulders above RAW and RAW2, but that's not really saying a whole lot, now is it?