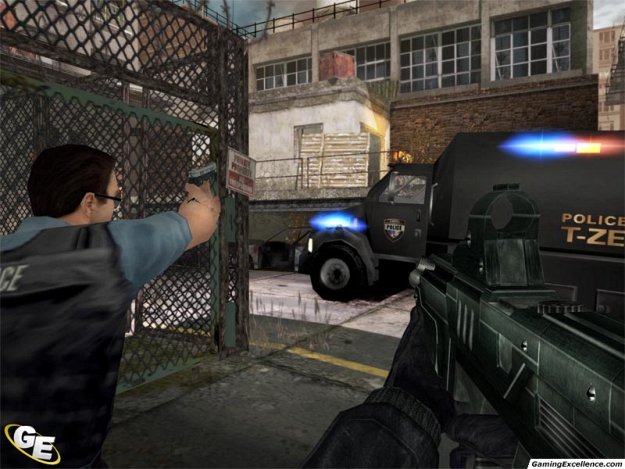 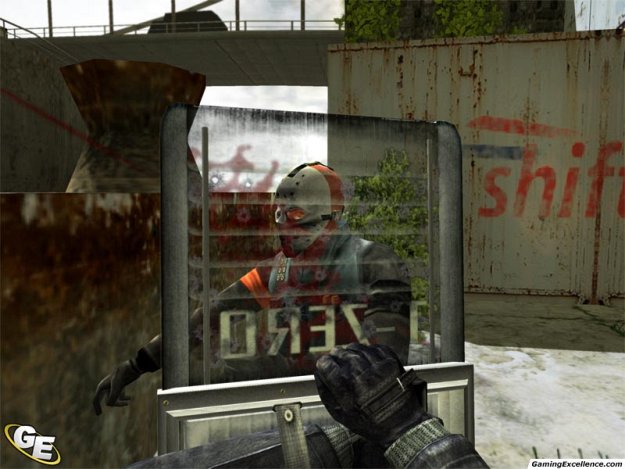 Have you ever dreamt of fighting off a horde of terrorists in ski masks who can jump from building to building as if they've seen the matrix a hundred times? If so, then you may want to look into Eidos recently released shooter, Urban Chaos: Riot Response. The setting takes place in the middle of an Urban War and it's up to the T-Zero squadron to save the day. With the help of firefighters, medics, and other police officers, Nick Mason is the one-man army that can bring an end to the misfortunes in the city.

The story takes place in a town overrun by gang members and terrorists. The police are having a hard time taking care of the mess, and the mayor decides to call in the T-Zero squad. This special team is made up of elite combatants that are highly trained and cost millions of dollars to the taxpayer. This fact angers many citizens (as you'll hear quite frequently from the local news reporter). The newscast serves as a sort of briefing before each mission and gives players a sense of what's going on with the overall story. However, most of what you'll hear is that the mayor is corrupt, the leader of T-Zero is corrupt, and that the people hate your guts and think you're not worth their money. As players progress in the game however, the townsfolk will eventually learn to appreciate your work.

The backdrops for all this mayhem take place mostly in downtown and warehouses settings seeing as this is an "Urban" war. A lot of missions also require players to go through burning buildings and rescue as many people as possible within a certain amount of time. Others require players to go back and forth between a speeding train while trying to keep the conductor and a medic alive at the same time. The train level seems cool in theory as half of the train is separated and you must go from cabin to cabin fighting gang members. But in practice, you're basically running from point A to point B and back again ten times while trying to keep your friends alive. That's only a small part of the action but one that stuck in my mind since I died numerous times trying to keep both of them alive. Most of the levels however, will be just moving through downtown and killing gang members whenever you encounter them. Players can also stun enemies with the "stun gun" and earn special medals for not using lethal force. Gang leaders in particular, are able to supply information about special missions if captured alive. These special missions are optional but if completed successfully, allow Nick Mason to unlock new "prototype" weapons for his arsenal. Medals will also unlock new weapons and increase the power of current weapons. However, most medals are gained through shooting 30 people in the head, stunning ten people, finding masks around a level, and stunning the gang leader. Now if you're asking yourself why you need to find masks, it's because the game treats them as evidence. The game doesn't elaborate any further as to why they're needed, but supposedly it helps in keeping the people shooting at you behind bars.

The weapons available to Nick Mason are very diverse, and include sawed-off shotguns, pistols, assault rifles, shotguns, stun guns, and even throwing weapons like cleavers and Molotov's. Early in the game, the "one-man army" is also able to don a shield and armor, which certainly does help in defeating the maniacal gangs. The game does try to keep the variety going by breaking the shooting spree from time to time. Often players will have to run through burning areas with a firefighter sidekick that can help in opening doors and putting out fires. Medics are also present as sidekicks that can heal wounds and help in saving civilians. And from time to time, other police officers will be able to help you with some extra firepower. All this help does not come without its burdens. If Nick Mason's sidekick dies, it's game over and players have to restart from the last checkpoint. The same applies to hostage situations. Most hostage situations consist of the player raising the shield while the hostage taker shoots. As soon as the enemy runs out of ammo, time slows down and players are able to shoot the enemy and free the hostage. The problem is that some of these hostage takers must go through certain rooms before they actually die, so shooting an enemy in the head in the first room, will only cause him to go to the next as if players had shoot him in the leg or some other non-vital body part. The hostage will also die if players get too close to the enemy, as the hostage taker will "freak out".

Riot Response does still manage to keep players entertained throughout most of its length. While the story and some of the gameplay elements could use some work, the sheer variety of action is enough to set it apart from a lot of so called "run and shoot" FPS games out there. The game is fairly challenging and some enemies will give you a tough time by jumping at you with cleavers and firing rocket launchers and other weapons. These gangs are so crazy that they'll even jump out from the ceiling and hang from their feet just to bring you down. The game also tries to give you a certain satisfaction of saving lives and it does feel good to rescue people from burning buildings and saving the wounded from the hell of bullet fire. The multiplayer adds increased replay value by letting players choose factions and being able to accomplish various missions while online. The online system also gives extended time to the weaker team but this feature can be overridden before the game starts. And while the game does burden you with protecting sidekicks throughout the story, this aspect is part of what makes this game as good as it is and certainly adds plenty of enjoyment rather than frustration. Despite its flaws and cheesy newscast/story, Riot Response is a great game that manages to be interesting and a lot of fun.