Urban Chaos: Riot Response is a action game developed by Rocksteady Studios for the PlayStation 2. The game was released on June 13, 2006.

Have you ever dreamt of fighting off a horde of terrorists in ski masks who can jump from building to building as if they've seen the matrix a hundred times? If so, then you may want to look into Eidos recently released shooter, Urban Chaos: Riot Response. The setting takes place in the middle of an Urban War and it's up to the T-Zero squadron to save the day. Read More. 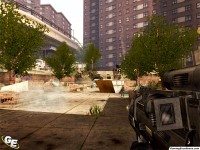