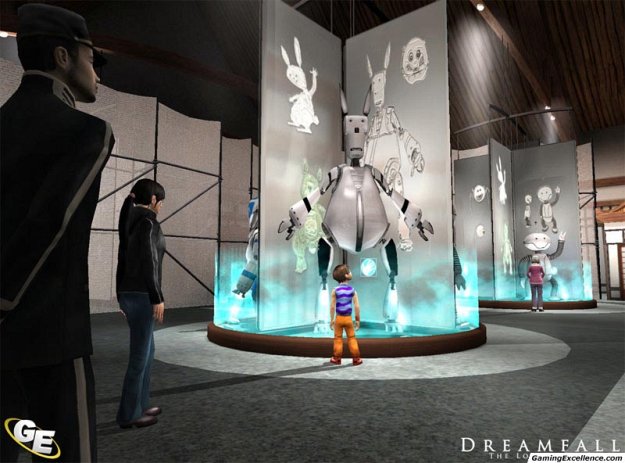 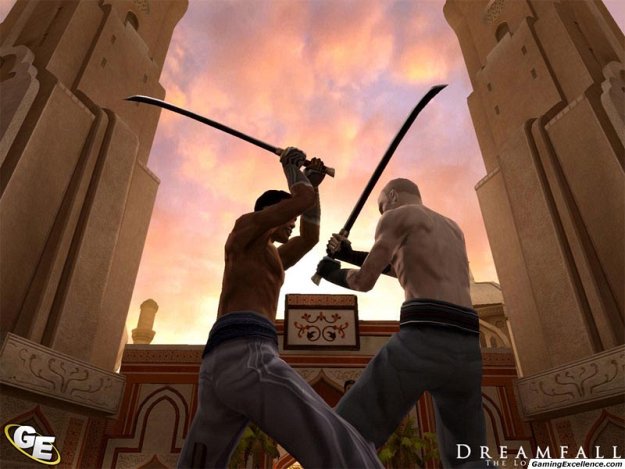 In the great spirit of "the sky is falling, the sky is falling", many reviewers, myself included, have previously made statements to the fact that it may seem the adventure game is a dying breed. Oddly, these statements came after a year of playing and reviewing such titles as Still Life, Syberia 2, Myst 4 and Indigo Prophecy. It seems we may all have been a little presumptuous with our doom and gloom. The simple fact of the matter is that adventure games are simply maturing, evolving and moving away from the excepted puzzle oriented fare of Maniac Mansion and Leisure Suit Larry and focusing more on intelligent stories and detailed, believable characters. The game that is arguably the most responsible for this change in focus is Funcom's own The Longest Journey. And while it may have seemed to many that we would never see a sequel to that masterpiece, six years have passed and Funcom/Aspyr have delivered a sequel that is not only an amazing game in its own right, but a worthy sequel to such a landmark pedigree.

The story of Dreamfall takes place ten years after the events of The Longest Journey. For those who have never had the pleasure of playing it, the important elements of its back-story are relayed in the game's manual and while they do help relay to certain events and characters, knowledge of the first game is not necessary to play or enjoy Dreamfall. While The Longest Journey focused on a young girl named April Ryan who could shift between parallel worlds, this adventure is more focused on Zoe Castillo, a young girl living in Casablanca with her father. A perfect representative of most young people nowadays, Zoe is sorely in search of purpose and direction in her life. Having dropped out of school and ended a long relationship with her boyfriend, she sleeps in late, watches programs, throws parties and procrastinates about everything (work, exercise, etc). Along the way, Dreamfall does visit (and allow you to control) April and various other characters, but Zoe is the main protagonist.

Dreamfall, for those unfamiliar with the series, is an adventure game heavily built on characterization, brilliant storytelling and far-flung concepts ranging from pure sci-fi to parallel universes. At heart, it is a science-fiction game set hundreds of years into the future where even the smallest detail seems both familiar and strangely alien. The city of Casablanca itself is a mishmash of early 20th century European/Spanish architecture with a blend of futuristic skyscrapers and artifacts. Walking around in the game is always a pleasure because it allows you to take in a world carefully crafted and thought out which is at once reminiscent and at the same time otherworldly. As with its characters, dialog and story-line, the artistic direction of Dreamfall is a high point and just one of many reason to play this game.

For the most part, you will be controlling Zoe, from a third person perspective, as she explores familiar and unfamiliar locales. In any environment, you'll be given options to interact or view most objects around you. A cursor box always shows you where Zoe's focus is and using the somewhat bulky focus-field controls, you can survey an entire room easily looking for all the objects which can be viewed, picked up or used. Focusing on characters will initiate conversations or monologs about the person. During conversations you'll generally be given topics to talk about and general dispositions of answers. These choices are really just there so those with ADD will stay tuned since the conversations generally go on for a bit. This is not a bad thing however, since the dialog is honest, believable and captivating.

The other gameplay mechanics in the game involve managing and exploring your inventory (and combining/using items to solve puzzles - nothing too complicated), sneaking around and also fighting, which fits into the story, but isn't handled very well at all. Although there isn't much of it and it's relatively easy, the fighting in the game, which mostly consists of moving your character about and performing light/heavy attacks while blocking, is the only downside to an otherwise perfect game.

Since Dreamfall is not really about solving puzzles or dialog choices or fighting or inventory management, it should be noted that what Dreamfall really is about is simply brilliant. The Longest Journey was a game which, must like the first Myst, set us free in a world with new concepts and laws of physics and such and offered us not only a narrative to follow, but gave us a palpable sense of past, present and future. When you've spent 15 minutes with Zoe, you'll not only identify with her, but you'll sense that through dialog, friendships, actions and thoughts, she's a real person. Dreamfall may exist in video game format, but it rivals the greatest novels of the English language in the sense that it fleshes out its characters so well, creates a well thought out and defined environment for them to exist in and manages to entertain and challenge us with its story and concepts. Dreamfall is not only good science fiction, it's good literature and seeing it presented in such a format only makes it more accessible to a generation of gamers who may not otherwise enjoy it in book format.

While Dreamfall does borrow a few elements here and there from popular culture (i.e. The Ring's flash-messages with the little girl's voice, the nano-spider a la Philip K. Dick's Minority Report, etc), it never does so in a way that detracts. In fact, these seemingly odd elements only add an air of familiarity to proceedings that would otherwise seem alien to us. Much like Stephen King sets up his books with things we know before unleashing the things we don't (and allowing us to follow the trail of believability), Dreamfall takes its time to anchor us into Zoe's reality before pulling the rug out from under our feet. What this means is a slow start which may seem meandering to some, but which establishes the characters and environments very well. Yes, the conversations are long, but they are well written and essential. This is as much a videogame movie experience as anything else, and while many might be put off by the long monologs or conversations, you'll look back on them in months to come with the feeling that they happened for real.

Graphically, Dreamfall is one of the best looking titles on the Xbox, with clean lines, nice textures and well-drawn characters. Yes, it looks even better on PC, but what truly sets Dreamfall apart from any other game is its sense of art direction. From the clothes to the buildings to the characters to the vehicles to the technology to the simple knickknacks strewn about a room, regardless of the universe you're in, these have all been considered and deliberately created and placed a certain way. And again, much like a great novel which sets its tone by spending 20 pages on setting alone, Dreamfall creates a storied world to exist in which in alive, moody and palpable. Brilliantly done.

In the audio department, all the lines in the world would mean nothing if they weren't delivered properly. And as with every other aspect of the game, the voice work is exceedingly professional, engaging and delight to listen to. Ellie Conrad Leigh does an exemplary job with Zoe and makes her instantly endearing to us while at the same time letting us know exactly what kind of person she is inside. It's refreshing to hear voice work which understands that it's not enough to get the words right, the tone, inflection and meaning have to be there as well. Dreamfall is a perfect example of a game in which I believe a character's motivations and intelligence level solely by his tone. As with all else, wonderfully done.

In the end, regardless off all the brilliant work that has gone into it, Dreamfall remains cursed by the simple fact that it does feature long stretches of dialog, less action than most games, a mature and well-thought out plot, intelligent characters and, and here's the clincher, is an adventure game. While it may not be the genre that is dying, it now seems to me that it's the audience that is growing incessantly less patient and demands to be slapped in the face more often by games. This is too bad though since Dreamfall (and its inevitable sequel, since it follows the Empire Strikes Back story-arch) is truly one of the best gaming experiences one could demand. Well told, brilliantly portrayed, hauntingly memorable (although a few more hours at the end would have given so much more closure), it stands as a landmark to the emotional and storytelling depth games can aspire to. While it is a niche title that it certainly not for everyone, it would be a shame for anyone with a PC, Xbox (or Xbox 360 since it is perfectly backwards compatible) and an open mind to let this one go unexperienced. Highly recommended.