Dreamfall: The Longest Journey is a adventure game developed by Funcom for the Xbox. The game was released on April 17, 2006.

In the great spirit of "the sky is falling, the sky is falling", many reviewers, myself included, have previously made statements to the fact that it may seem the adventure game is a dying breed. Oddly, these statements came after a year of playing and reviewing such titles as Still Life, Syberia 2, Myst 4 and Indigo Prophecy. Read More. 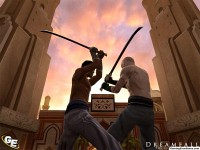