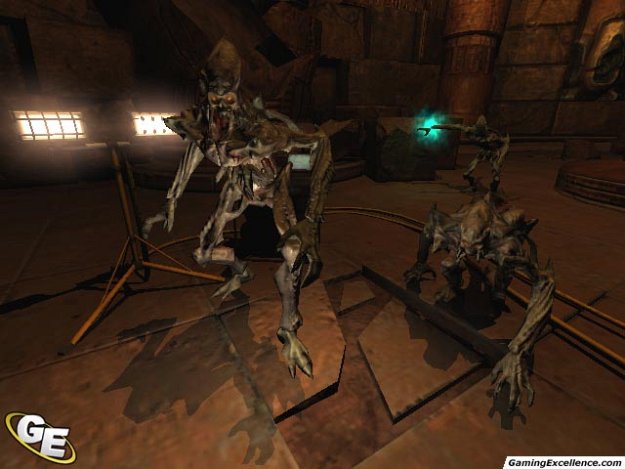 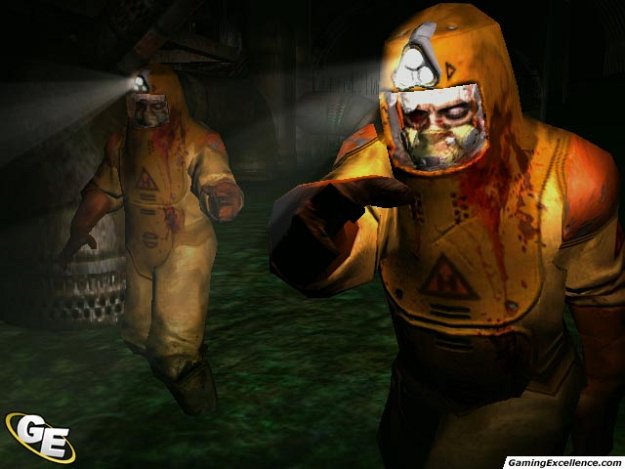 When DOOM 3 was released for PC (and later for Xbox) it caused a giant rift among DOOM fans and FPS lovers in general. DOOM had always been about one man taking on wave after wave of monsters. It was action personified. But with DOOM 3, many expected the series to evolve beyond that by borrowing from Halo and Half-Life. Many wanted dual-wielding weapons, working vehicles and vast open-ended areas with loads of shooting. In the end, DOOM 3 used none of these trappings, but still proved to be a moody yet slick run and gun action title that also just happened to look impossibly amazing. There was still a story being told, but we didn't have to deal with branching paths or cut-scene after cut-scene. DOOM 3 was a throw-back and innovative at the same time. An instant classic. And as with all things Quake, DOOM, Diablo or Warcraft related, an expansion pack was inevitable. Unfortunately, id/Vicarious Visions did not have a hand in designing this and so, what DOOM 3 painstakingly set forth, Resurrection of Evil (and Nerve Software) completely ignore and instead try to give gamers an action-fest without too much substance.

Whereas DOOM 3 had a decent enough plot, memorable PDA voice messages and moments of shear exhilaration, RoE has a throw-away story, text-based messages and few moments of shear joy. Luckily, the game isn't as long either. It's now 2 years since the incident on Mars and wouldn't you know it, there's a distress signal coming from the site. You guessed it; you're another nameless marine going back into the fray, this time as part of a massive research and security team led by Dr. Elizabeth McNeil. Is any of this starting to sound familiar yet? Remember the brilliant intro to DOOM 3, where you were given time to get your bearings and look at all the amazing textures and graphics for a bit before the action started? Remember how that really set the pace and mood for the entire game? Moments of unnerving quiet with quick flashes of intense violence. Well, RoE tries something different by throwing you to the wolves right off the bat. The effect is disorienting and feels very canned. There's no sense of setting either and I wondered for a long time if I was even on Mars to begin with. The pacing this time around is horrible and the game feels more like DOOM 2 than the brilliantly conceived DOOM 3.

Alright, here's some good news and bad news for everyone: The good is simply that The Marine has finally figured out how to use duct tape and attach his flashlight to a weapon. The bad news is that he's picked the handgun which has the stopping power of a bean-bag thrown by a 70 year old. So, the general mechanic hasn't changed: Use flashlight to establish your bearings, change to a valid weapon to dispatch monsters. Unfortunately, where DOOM 3 used this mechanic to effective and dramatic (and intense) effect, RoE uses it as a gimmick. There are lights almost everywhere and rarely will you find yourself in the dark wondering if you're in any real type of danger. In RoE there are flashing lights everywhere, sirens blaring and monsters spawning out of nowhere behind you when you least (and most) expect them. When it's quiet and dark, you just have to remember to turn around since there'll be another "spawning" soon. And it's not that RoE does anything blatantly wrong here, it's just that after playing DOOM 3 and expecting more of the same, RoE feels different.

Resurrection of Evil does try to bring some new toys into the mix and these are what make it interesting enough to play through. The first and possibly most talked about is the Ionized Plasma Levitator or "The Grabber". When you first see this one, you'll have a moment of blissful realization; with the grabber, you can "grab" almost any loose object and hurl it where you like, anything from barrels (including those lovely flammable ones), boxes and oh yeah, fireballs that the Imps through at you. It's a clever way to make fighting the same monsters seem fresh again. The only problem is that "The Grabber" is overly finicky against hurled fireballs and needs almost perfect timing to catch them. The other downside is that if you fight more than one Imp at a time, forget about catching anything... you may as well resort to the crappy handgun for stopping power.

The other real departure in the weapon department comes from "The Artifact" which you pick up immediately on Mars. In the course of the game, you'll be able to acquire three incredible powers for it from Hell Time (aka Bullet Time, in which time slows to a crawl while you're still able to move, dodge, shoot and reload at normal speed), Berserk Power (aka Mike Tyson's Punch Out mode where you'll use your fists to do amazing amounts of damage) and Invulnerability. The slight downside to using the artifact is that it's powered from human corpses and has to be recharged to work. So, when you see a whack of dead dudes lying around somewhere, you not only know that this is the time to recharge your doodad, but you're also pretty much assured that it's in your best interest to use it in the near future. Still, the artifact, much like "The Grabber" adds a level of freshness to the DOOM universe that I hope is expanded upon in future releases.

The final big addition is the Grand-Daddy of all weapons; The Double Barrel Shotgun. For pure stopping power and monster dispatching needs, there has never been a more satisfying piece of hardware available. Yes, the thing takes forever to reload (so do so intelligently and conservatively) but it's the best weapon in the game if not all DOOM games. The only downside to such a weapon is that it makes a lot of the game a little unchallenging at lower difficulties. Don't worry though; Boss Fights will still challenge you in new and creative ways.

Graphically, DOOM 3 Resurrection of Evil still looks amazing. I think DOOM 3 had a little more shine on its textures and used light differently, but RoE is still one of the best looking games to grace the Xbox. DOOM 3 had better designed levels and due to its more claustrophobic design was able to show more of its textures up close. RoE focuses more on outdoor levels and open areas and doesn't seem as tight in its design. The marines still pretty much looks like the marines, but Dr. Elizabeth McNeil's character design was a real letdown. Maybe I'm biased by the fact that Jennifer Hale voices her and I usually picture my Jennifer Hale characters looking like Bastila Shan or Samus Aran or Alexandra Roivas but she definitely would have looked different had I been involved.

In the audio department, any game that has Jennifer Hale scores extra points with me right off the bat since I'll usually pick up a game just because she's doing voices in it. And in DOOM 3, she still doesn't disappoint. Her in-game character may not look like much, but she's voiced perfectly well. The other characters are also quite good but the audio loses a few points because it's not as fun as in DOOM 3, namely with the PDA's found strewn around Mars and such. The core blood-chilling sounds of DOOM are still present with perfect use of positional audio. The music, while not over-bearing, fits the mood (and stages) of the game perfectly.

The biggest disappointment for returning fans of DOOM 3 may truly be the complete lack of a co-op mode (on or offline) for the campaign of RoE. This sticks out like a sore thumb mostly because the match-type multiplayer modes of both games (deathmatch, team deathmatch, tournament and last man standing) are lackluster at best and generally not very fun. The best multiplayer aspect of DOOM 3 was its co-op play over Xbox Live where you had to truly trust your partner to illuminate the darkness for you as you slowly waddled through darkened level after darkened level. Resurrection of Evil removes all of this and it truly hurts it.

On the bright side, those of you who didn't manage to snag a Collector's Edition of DOOM 3 may have missed out on its inclusion of Ultimate DOOM and DOOM 2 (which both featured co-op modes). Well, Resurrection of Evil has both of these classic DOOMs plus DOOM 2 Master Levels. For the discounted price, even if you picked up this package simply for DOOM 2, you'd be doing yourself a favor.

At the end of the day, Resurrection of Evil had impossible shoes to fill, and for all its faults and missteps still amounts to a good game (with amazing graphics) that any DOOM fan will be happy to play. It may not offer the all-out attack on the senses that DOOM 3 offered, but from the start, it's obvious that RoE tries to walk a different line. Fans of DOOM 2 that found DOOM 3 a little too tame will appreciate RoE's revival of all-out action levels and open areas. The inclusion of Classic DOOM games and the lower price point makes the addition of Resurrection of Evil to any DOOM fan's library a no brainer.