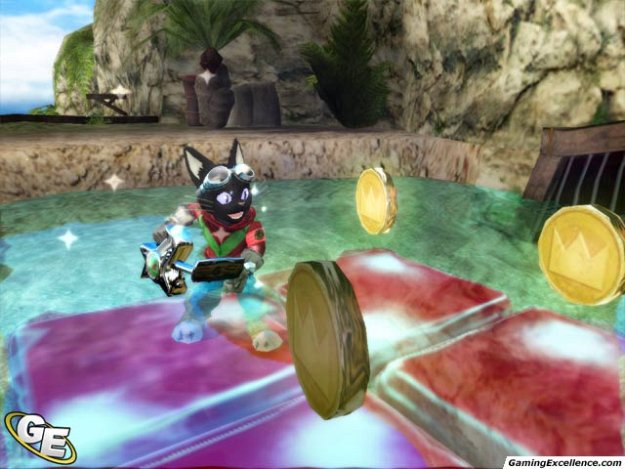 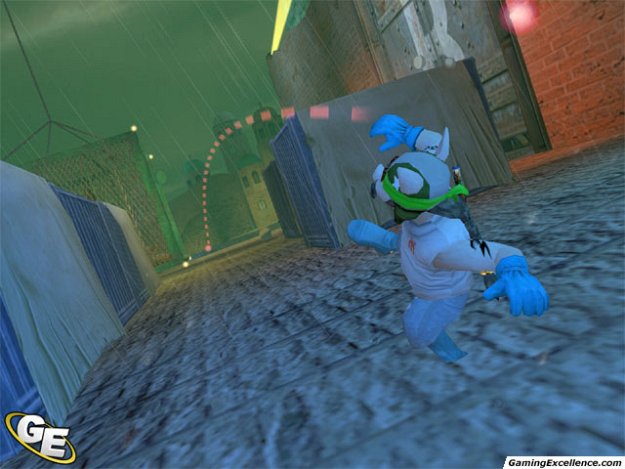 Blinx 2 is the follow-up title to Microsoft's 2002 release Blinx: The Time Sweeper. Developed by Japanese company Artoon, the series features a time-travelling feline, although surprisingly you won't see much of him in this sequel. Blinx 2 is an action platform game similar to the highly popular Sonic series. The major difference however is, unlike Sonic, it doesn't feature any "attention grabbing" elements, and isn't a title I can see myself remembering years down the road.

The story is typical fanfare of most games. There's a crystal called the "Big Crystal" that has been shattered, and it's your job to collect the fragments, as these cats are supposedly the guardians of the flow of time. You are then told by the "CEO" (the head of the cat's organization) to get the crystals back by travelling to different worlds. There is also a faction called the "Tom Tom Gang" that is after the crystal shards. Throughout the game, both factions cross paths in the search for the crystal. All facts considered, the story of Blinx 2 is not really a highlight of the game. It feels very unoriginal and doesn't grab your attention. To top it all off, you don't even play as Blinx, you'll simply bump into him a few times throughout the game.

When you pop the game in, you'll see that you get to create your own character. There are various customization options, everything from facial type, to size of different body parts. You then select a name for your character, name your team, and choose a flag to represent this team. In this respect, Blinx 2 gets a lot of points for presenting an original idea, which isn't seen in most platform titles. However, it still doesn't change the fact that the game has no defining character, and that Blinx only appears during cutscenes.

The game then puts you through a couple of tutorials to teach you the basics of gameplay. Once you're through with these tutorials, you'll finally get to play a level with the character you created. The game features boss battles and team battles where the team members you picked from the beginning will be able to assist you. Although the concept of the team combat is an intriguing idea, the AI controlled team-members are virtually useless, leaving you to complete most of the battles yourself. With that said, the team battles are so few and far in between that they almost don't factor into the whole game experience anyhow.

The visuals for this game are about average, certainly nothing to get your hopes up about. The game fails to impress in terms of character detail, for both enemies and your customized character. Generally, these models are very bland in appearance, with very little that stands out. Combine this with environments that look pretty much all the same, and you won't end up with a memorable experience.

In the sound department, Blinx 2 is also lacking. The music is often more annoying than inspiring, and the voice acting is quite poor. Voiceovers are only present in cutscenes instead of in the gameplay itself, forcing players to read most of the story. That's not to say that all the sounds are really bad, but they simply aren't anything special, really quite average like the rest of the title.

When talking about gameplay, Blinx 2 also really doesn't deliver an entertaining experience. While the vacuum weapon does provide some shooting action, you can only carry five shots at a time. The game does offer plenty of objects to recharge your vacuum with, but the whole thing just seems like more of a chore than fun. Your character does have the ability to use a physical attack, albeit it's virtually useless as the most practical way of killing enemies is the vacuum gun.

Players will get the opportunity to play as "the cats" and the Tom Tom Gang. Each of the factions offers different attacks and special abilities. While "the cats" have the vacuum and time control, the Tom Tom Gang have better physical attacks and abilities like banana throwing and sleep darts. Blinx 2 also offers puzzles and other gadgets to help the gameplay; however most of the puzzles consist of using your characters special abilities. In most cases, the puzzles don't offer much of a challenge, especially since the game tells you exactly what to do in order to solve them.

Blinx 2 offers multiplayer for up to four players. While it can be a lot of fun to play with a couple of your friends, the multiplayer doesn't offer much more than the team battles in single player. In addition, the game features a co-op mode that lets you take on the single player game with a buddy. The puzzles do change slightly with co-op play but the changes are few and far between. Basically, co-op plays almost exactly like single player and doesn't take advantage of the two player capabilities.

Despite the many flaws in Blinx 2, it's not necessarily a horrible game. It's just that the many flaws overshadow the good things that Blinx 2 has to offer, such as character customization and innovative weapons like vacuums and banana peels. This game just isn't interesting enough to keep players entertained, as there simply isn't much innovation in the gameplay or storyline. With so many other great action titles available for the Xbox, it's difficult to recommend this one, unless of course you love cute cats and pigs. Adding the fact that a lot of other action titles can blow Blinx 2 out of the water, it's probably best to make it a rental.