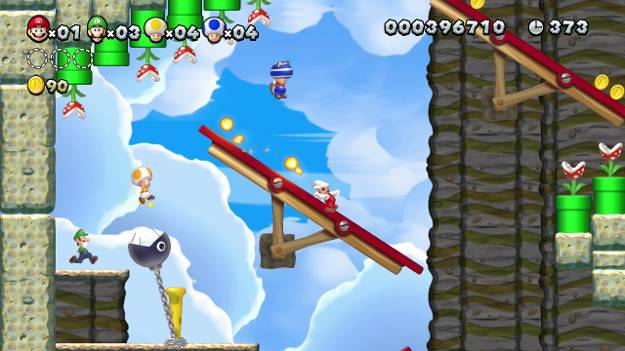 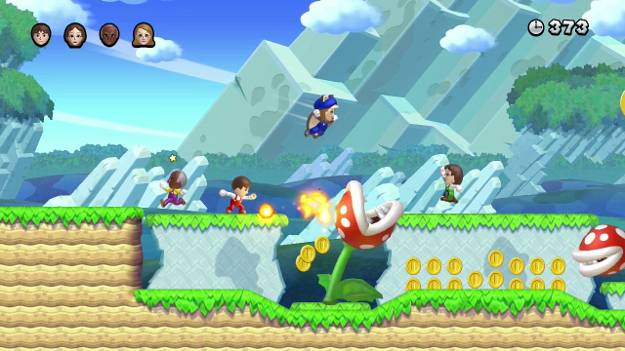 Naturally, with the pending release of the Wii-U, Nintendo is making sure some of their iconic characters will have their own title for the new system. The New Super Mario Bros. Wii-U is exactly what you'd expect of a Mario game with some new editions to bring out the features of the console.

If you've already played The New Super Mario Bros. Wii then you already know what's in store; a single- or multi-player, interactive trek through colourful levels on equally colourful maps to save the princess from yet another terrible situation. The usual three star coins are hidden in every level (which you can collect to unlock other in-game features), along with the staple fire flower and mushroom power-ups. 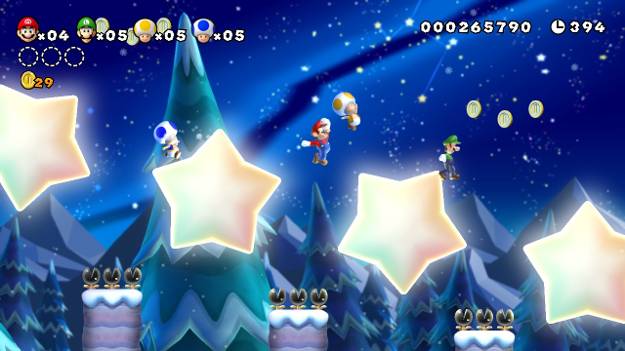 The addition of the Wii-U controller allows up to five players play simultaneously. Whether single- or multi-player, you can choose to look at the controller's screen rather than the TV and walk away within a "reasonable distance" while still being part of the gameplay.

In single-player mode, you play through the game using the controller as though it's a Wii-mote, right down to shaking it to perform an action in-game. As soon as you add another player, however, you have a choice of what the player toting the Wii-U controller can do. They can either play as a character or play in "boost mode."

Boost mode is simply a mode that allows you to help the other player(s) in the game. You tap the touchscreen to cause up to four platforms to appear, allowing your friends get to places they otherwise can't reach or preventing enemies from getting to them, like pesky piranha flowers from coming out of pipes. If you create a platform and tap it again, it becomes a coin platform that, when touched, gives the players some coins. Once the platform is used it disappears. Players of the Wii version already know how fun yet infuriating it can be to try to get somewhere only for another player's character to block you, imagine adding a player who can have platforms pop up out of nowhere to the mix.

Boost mode also gives the user the chance to stun enemies simply by tapping on them; other players can then finish them off as they stand in a disoriented state.

You can't play in boost mode and be a character in-game at the same time, it's either one or the other. When asked, the Nintendo representative wasn't sure if you have to play through the entire level in your chosen mode or if you can switch midway. 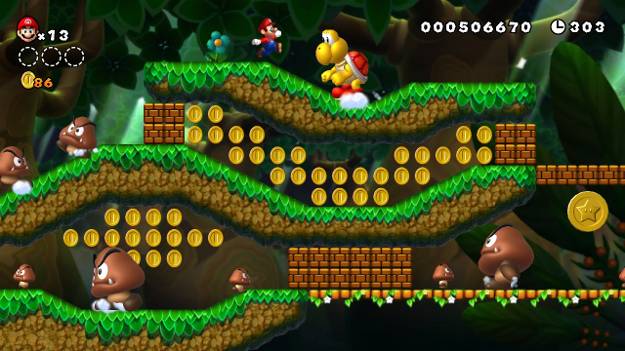 When you choose the character you want to play, you can either play as Mario, Luigi, one of two Toads, or you can choose your own Mii to wear one of their outfits. While unclear if this means four people can play as Mii's in only Mario outfits (I would guess probably not) it does mean it's that much more fun to play when you get to see "yourself" in a Mario game.

When you acquire an acorn you transform into Mario's newest power-up, a squirrel with cute ears and arm flaps that join to your legs. In this state you can shake the controller to get a boost into the air and are otherwise able to glide wherever you need to go. Actual flying squirrels are in-game as well, flying in your way the same way the caped-flying baddies from Super Mario World would.

And of course your favourite companion, Yoshi, is there to help in a new way. As you run around holding a small "chubchub" Yoshi in front of you, you can have it eat your enemies and, especially useful if you're about to fall to your doom, a quick shake of the controller causes Yoshi to inflate as a balloon so you can float wherever you need to go.

The demo promises to give more fun Mario adventures to fans of the franchise. Though few levels were available to try, let's face it, the Super Mario games are practically guaranteed to be a blast to play and the very noticeable HD graphics will appease many fans. Expect to see it in-stores this winter 2012.