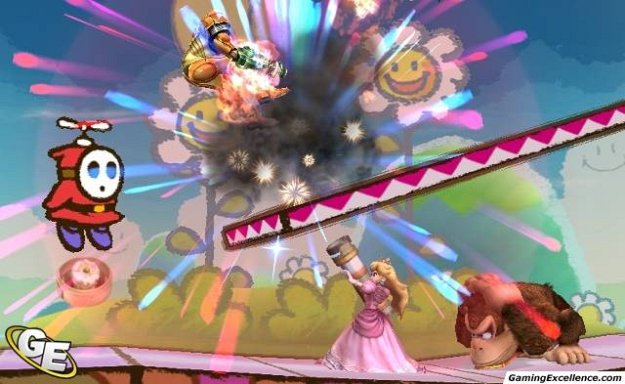 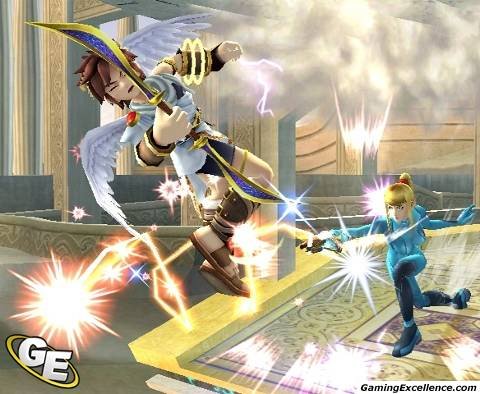 Super Smash Bros. Brawl is one of the most anticipated Wii games to date, and on the surface, it's easy to see why. The Smash Bros. series has been a multiplayer staple since its inception on the N64 a decade ago, and always a favourite at parties. Unfortunately, the formula is beginning to wear a little bit thin. Aside from a massive character roster and online play, there's little here you haven't played already in past iterations of the franchise.

For the uninitiated, SSBB is an over-the-top fighting game that pits famous Nintendo characters across several titles against each other in crazy four player battles. It can become difficult to keep track of what exactly is going on sometimes as the game can be incredibly hectic and chaotic. The levels themselves are just as lethal as your opponents and have lots obstacles to overcome. Rather than draining health by pummelling your opponents, you increase their percentage as seen on the bottom on the screen. The higher the character's percentage, the more likely the character is to fly off screen when hit and lose a life. You'll also lose a life if you fall off the screen of your own accord.

Beyond your character's abilities, you'll have access to a wide variety of items of varying usefulness. You'll encounter such Mario staples such as stars, mushrooms, and fireflowers. These are in addition to more practical tools of destruction like the hammer from Donkey Kong and a baseball bat. There's roughly forty different items to use, and almost all feel useful in some capacity or another.

If you've played either of the previous games in the franchise, you will be right at home with this one. In an excellent move to encourage multiplayer play, there are four separate control schemes, each with their benefits and downfalls. The first is with the remote and nunchuck, for all those arm wagglers among you. The scheme works fine, but I prefer my fighting games to use a lot less motion controls. You can also play with just the Wii-mote while forgoing the nunchuck, but this scheme lacks the necessary buttons to be truly precise in your movements. For this review, it comes down to a choice between the classic controller or a GameCube controller. For those weaned on the GameCube, it still works great and there's zero adjustment period. However, I prefer the overall feel, button layout, and wireless play that the classic controller offers. No scheme works poorly, and you're sure to find one that suits you best. It's nice that Nintendo made it possible to use older controllers with the game, since few people have four Wii-motes.

No matter which scheme you choose, you'll find making precise movements to be a chore. Pressing up makes you jump, which can easily result in accidental deaths. If you push the analog stick too quickly, you'll dash forward instead of walking. Even using a classic controller with enough buttons, the blocking shield and grab buttons use the same button. Also, some characters have very awkward movement which makes making exact jumps and specific move a real hassle. I'm thinking mostly of Lucas and Yoshi here.

At the same time however, the controls are the same for every character, taunts, special moves, basic attacks, blocks, grabs, and the use items. Since all characters control the same, there's only a minimal adjustment period when you change characters and learn a slightly different move set. All characters can double jump, and most have a special move that allows for a third burst upward, which can really save your life if you're about to fall to your doom.

While having the same controls for every character is great for getting new people to jump into the fray for some multiplayer fun, it means the game lacks the depth of more intricate fighting games like Tekken or Street Fighter. Granted, different characters have different moves that can be executed in different manners, but it's entirely possible to master every character in the game after only a few hours of play. Furthermore, those who have played Smash Bros. before will have a decided advantage over any newbies, which may put off those new players.

Odds are that if you've ever played a single Nintendo game across their entire history, you'll see it referenced here. There's dozens upon dozens of characters to use, and you have many choices about how to go about unlocking them. If you only want to play multiplayer, you'll unlock characters through the simple course of beating up your friends. After roughly 1,000 brawls, you should have all the characters unlocked. The roster includes Smash Bros. staples such as Mario, Zelda, Samus, Link, and Pikachu, but also features a plethora of new comers like Solid Snake, Sonic the Hedgehog, Diddy Kong, Meta Knight, Falco from Star Fox, among many others. One thing this game has going for it is the enviable ability to pit former cutthroat mascots Mario and Sonic against each other.

For single player gamers, you can unlock characters by playing the simple tournament mode. This has you progressing up a ladder of battles as you fight for the right to take on Master Hand, the same boss from the other two games. This mode gets boring quickly. Your opponents rarely change, and this is by far the most repetitive mode in the game.

The better option for single players is The Subspace Emissary. This mode is essentially a side-scrolling adventure mode with the fundamentals of the main fighting engine. In this mode, you're treated to a ridiculous meta-story that has all the good guys teaming up against popular Nintendo villains and a faceless bad guy that floats around his platform turning people into statues. The storyline is absolutely ridiculous, and is really only an excuse to get all these characters together for some sweet looking cutscenes. The best part about this mode is that it forces you to try all the characters throughout various levels, meaning it's a great way to figure out which ones are your favourites, and which you want to avoid. You can also power up your characters in this mode by applying unlockable stickers that increase their stats.

Putting the fighting game mechanics into a side-scroller is a concept that works surprisingly well. By beating up waves of generic bad guys, Nintendo baddies and some very cool bosses makes this the best use of your single player time. Still, it's far from perfect, the aforementioned control issues still raise their ugly head from time to time, and the auto-scrolling levels are far more annoying than fun. The mode is surprisingly lengthy, requiring upwards of ten hours to complete. You can also play this mode co-operatively with a friend, which ups the fun factor significantly.

Closing out the single player game, there's an extras section where you can explore a bestiary of Nintendo classics, play a fun coin shooting mini-game, play old school Nintendo demos, and listen to unlockable music tracks. It's enough to bring a tear to a Nintendo nostalgic's eye.

Nostalgia is great, but it feels like Nintendo had made a few too many trips to the nostalgia well recently. It kind of feels like we're paying them to stroke their own egos at this point, which is clearly much bigger considering the success of the Wii and their overall market position. Still, the game is a veritable museum and treasure trove of Nintendo history, perhaps more so than any game released yet.

But seriously, who plays Smash Bros. for a compelling single player experience? There really isn't much of one to be found here.

Unlike the very best party games, there is a great divide between those who have played the game before, and those who haven't. Frustrating new comers in this way is not a great way to get people to play with you. This is a shame, because when four newbies or four experts get together, it's multiplayer magic. If all four characters are on the same skill page, you'll have a raucous time yelling at your friends, navigating the brilliantly designed levels, and arguing over which characters truly are best.

SSBB also introduces online multiplayer for the first time in the franchise, and while it's very functional, the lack of voice chat and those idiotic Nintendo friend codes cripple the online mode way more than it should. Still, just having online play should please any Smash Bros. fan, and it's a solid alternative to the dry single player modes.

While this game won't compete visually with your average Xbox 360 or PS3 game, it works as a real showcase to what the Wii really is capable of. The levels are incredibly detailed and feature tons of activity both in the back and foregrounds. Beyond the levels, the characters themselves look fantastic. This is the first time you could see the individual strands of fur on Donkey Kong, the stitching on Mario's overalls, and the scales on Bowser in all their glory. The characters animate fantastically, and considering the massive amounts of action taking place onscreen at any given time, it's a miracle that the game never drops frames or runs choppy. This is among the best looking Wii games yet.

The audio on the other hand sucks. The music is incredibly annoying, giving you a generic epic soundtrack that rarely reflects anything that may be going on screen. The cutscenes in the single player mode have no voice acting whatsoever, which is probably a blessing considering the grating war cries some of the characters make. You can only hear Pikachu scream "PIKA" so many times before you want to shove your Wii-mote into your brain through your ear. An overly enthused announcer completes the mediocre acoustic package.

If you're a fan of Super Smash Bros, rest assured that you will be getting your money's worth here. On the other hand, the gameplay has lost some of its lustre over the years and lacks the depth of other well established fighting franchises. If you've got a few like minded friends to play with you, this is some of the best fun you can have with your Wii yet. Single players will be left scratching their heads wondering what the hubbub is really all about.