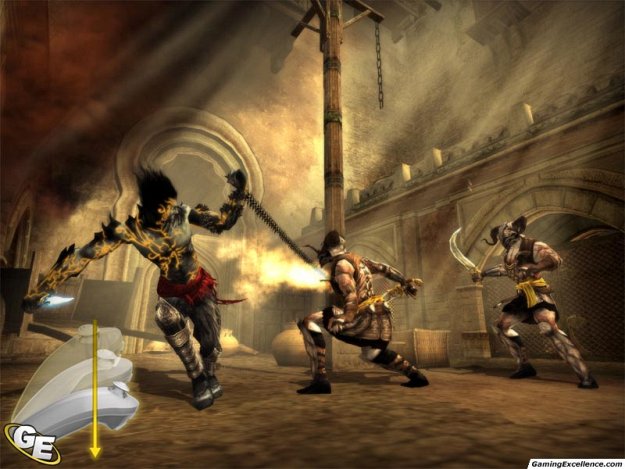 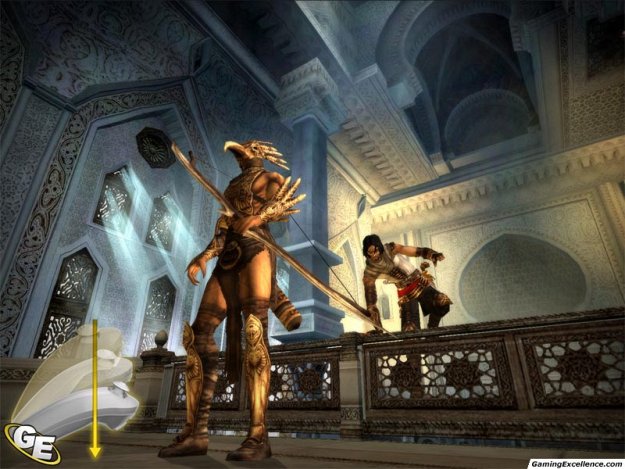 Is there anything sweeter than cold pizza the morning after a party? An odd way to begin a review I know, but bear with me. When Prince of Persia: The Two Thrones was released in December of 2005, it was the video game equivalent of a premium pizza. You know, the kind that has cheese that stretches for miles when you take a slice, littered with delicious toppings, and a crust so thick you can use it as a floatation device. Nowadays, The Two Thrones is one of the best bargain bin finds you can get. It's a deep, fun, incredibly well designed game from top to bottom, and it can be yours for dirt cheap. Rival Swords for the Wii on the other hand, is the equivalent of cold morning after pizza. It's still delicious, but time has taken its toll. The catch, Ubisoft expects you to pay premium price for leftover cold pizza.

By charging full price, Ubisoft has alienated most people who would be interested in playing Prince of Persia on the Wii in the first place. Why would you pay full price for a game when you could just buy the GameCube version that even runs on the Wii for a third of the price? Both games are exactly the same in terms of graphics, story, level design, audio, and even unlockables. The main difference between the two lies primarily in its use of the Wii controls in new ways.

For the uninitiated, Rival Swords deals with the adventures of the Prince of Persia and his escapades screwing with time. At the conclusion of the second title, Warrior Within, our hero has defeated the Dahaka: a demon that guards time itself, and slain the empress of time, Kaileena. The game's intro states that this isn't exactly as it happened, as the Prince begins the game on a boat with the Empress on his arm instead of having her head on a pike. No sooner than they turn the corner on the river Babylon expecting peace does the pair get an unexpected surprise. The city is in ruins, and has been invaded by an army of sand monsters. The ship gets destroyed and the Empress of Time is kidnapped. It is up to the Prince to therefore run, jump, and slash his way to the perpetrators, rescue his girlfriend, and restore peace to his kingdom.

The first thing that you'll notice about the game is the strength of the writing. The narration in the game is extremely witty, informative, entertaining, and has more literary value than most action games to ever hit a game console. There are lots of twists and turns to be seen before the game's conclusion, and the story is expertly told. What's better than one great narrator? How about three of them? The Empress and the Prince's alternate personality also get their voices heard, and never do their lines feel forced or extraneous. Rival Swords should be the first game to be pulled out when someone claims a video game can't tell a deep and compelling story.

In order to see the game through to its conclusion, the Prince must do some unbelievable feats of athleticism in order to transverse the landscape of the game. The Prince can run on walls with a push of the B button, make mighty leaps across chasms, and also spin on poles, stab holes in walls for support. The platforming sections of the game simply control like a dream, and with just a little practice, you too will be flying through the air from little platform to a pole, to another little platform, up a wall, and so forth. Some levels in particular have you committing these acrobatics hundreds if not thousands of feet in the air, resulting in an awe inspiring if not vertigo-inducing experience.

Of course, if you screw up and careen down to a hilarious or sickening death, you always have the sands of time at your disposal. The Sands of Time's main function lies in rewinding time if you fall into a bottomless chasm, impale yourself on spikes, get owned in combat, and any other fate you may encounter that is less than appealing. With just a push of the Z button, all your idiotic mistakes are erased up to a few seconds prior. Of course, there is a limit to how many times you can do this, but sand to refill your tanks is very common in the game, and can be obtained from smashing objects or killing enemies. You'll only encounter a handful of situations where sand availability is a problem. The Sands of Time has other uses too, like turning everything into slow motion to solve certain puzzles, and making what amounts to a sand bomb that kills everyone on the screen.

The sands of time prove more essential when the Prince becomes corrupted by the sands, and his new alter-ego is born. At certain sections of the game, the Prince will suddenly transform in a flaming, evil version of himself. The Prince certainly has the most advanced case of schizophrenia I've ever seen, as when he is in either form there is lots of hilarious dialogue between the two personalities raging in his head, even interrupting the narration. The Prince may not be his alter-ego's biggest fan, but you won't mind one bit when he transforms, because the alter-ego is the very definition of badass. He has a chain-whip attached to one of his arms that can do massive damage to a group of enemies and comes in handy in several platforming sections as well. This is important too, because in his evil form the Prince's health will constantly drain. The only way to refill it is to acquire sands of time, either from items or killing enemies. This mechanic therefore adds a good sense of tension and urgency to his sections, and forces to player to act quickly. Furthermore, the new Wii controls seem tailor made to suit these parts of the game. I think the moment I became a true believer in the Wii-mote (Twilight Princess not withstanding) was when I whirled the nunchuck over my head, and the Prince on screen whirled his whip in conjunction with my motion.

Combat isn't perfect, but the sheer amount of moves the Prince has at this disposal, coupled with the new Wii-centric controls, make combat more fun than any other Prince of Persia title. The controls for combat are simple enough, the Wiimote controls the Prince's right hand, and the Nunchuck controls his left. By making swipes with your arms in the proper order, the Prince is capable of some devastating attacks that look as cool as they hurt. It's too bad that the enemies don't have even a fraction of the personality that the Prince exudes. All the enemies in any given section look identical, and none of them pose a huge amount of challenge. The bosses however, are all appropriately epic and memorable, and lots of fun to figure out. Unlike many other action games, the boss battles in POP are more like a Zelda style puzzle than a typical whack-a-mole type battle that is all too common in recent action titles.

It doesn't matter a whole lot that combat is far from perfect, because most of the time the game gives you the chance to commit stealth kills rather than engage in face to face combat. The stealth kills in the game are quite cinematic and extremely satisfying to pull off. To pull one off, the screen goes blurry around the edges, and the player is required to wave the Wiimote in time with the motions of the Prince. It's an extremely fun mechanic, and a superb alternative to the sometimes dreary fighting.

While most of the game consists of platforming and combat, there are a pair of chariot races that help introduce a little variety. However, the collision detection in these sections is rather weak, and the controls don't seem as responsive as when the Prince is on foot. Overall, the races are more frustrating than fun.

This is one game that has not aged gracefully in the graphics department. The game looks about on par with the GameCube version of the game. Textures look blurry and washed out. The colour scheme through out the game is rather bland and unappealing. Furthermore, the cinematics in the game suffer from terrible compression, with lots of dancing pixels and distracting artifacts. This game doesn't even come close to testing the graphical limits of the PlayStation 2, let alone the Wii. At least the Prince animates beautifully, gracefully making his way through the perilous levels.

Audio is a different story all together. The game makes good use of the Dolby Pro Logic surround sound, with lots of sound effects coming convincingly from all angles. The music in the game is haunting and beautiful, that perfectly suits the Persian theme of the game. The choir and vocals in the soundtrack are of particular beauty. Occasionally, your alter-ego will chastise you for a mistake you haven't even made, but these audio glitches are few and far between. Rival Swords is a rewarding acoustic experience.

To buy or not to buy is the final question. The Wii controls do add a significant amount to the experience, but not enough to justify a 200% increase for the going rate for the game. Considering how little else Ubisoft put into this package, with no other enhancements to speak of, Ubisoft is essentially getting them to pay full price for the same game twice. Maybe if they had added a few more toppings to this pizza, it would be worth the investment, but not as it stands. It's still worth grabbing a slice, but probably no more than a rental.