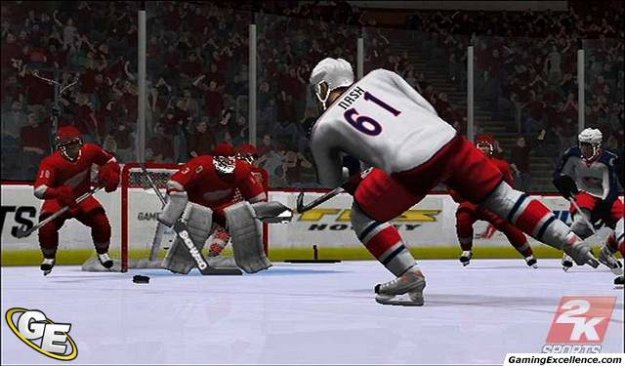 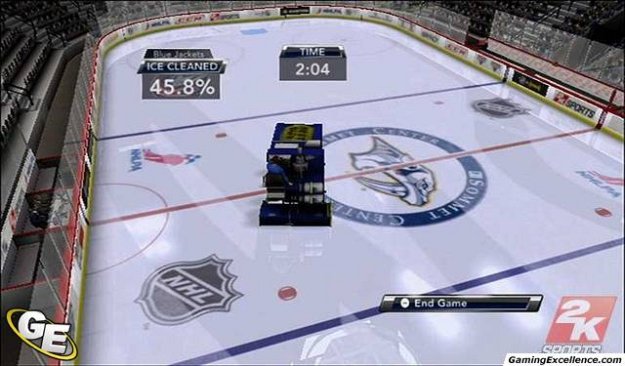 As an Ottawa Senators fan, I know all about growing pains in an inaugural season. After all, my local boys had the second worst season of all time in their first year, winning only 10 of their 84 games. 2K's first effort on the Wii doesn't tread in the murky waters traversed by that early Senators team, but it has a lot of work to do before their flagship hockey franchise becomes a contender on the Wii.

In most of my reviews, I usually mention graphics and presentation towards the end of the review, but I think in this case, it needs to be mentioned up top. NHL 2K9 for the Wii is eye-ball meltingly ugly. This is the ugliest hockey game that I've seen in about a decade, no joke. Player models are blurry, animations are awkward, players are not proportionally sized, and the observing audience is made out of card board cut-outs. This honestly looks like an N64 game with less jagged edges. I can assure you that NHL 2K3 on the GameCube looked way better than this visual vomit. This game is so ugly that if you saw it in a bar with a ten drink minimum, you'd still think "damn that's ugly."

You'd think that a game this ugly would at least be running at 60 frames a second, but you'd be wrong. The frame rate is unacceptably choppy, especially during replays or scrums around the net. Time will tell if this ugly duckling of a game will blossom into a beautiful swan, but as it stands, this game looks and moves like an enforcer who's taken far too many punches to the face.

Visuals not withstanding, NHL 2K9 is actually a pretty good game. The highly touted Wii controls work much better than you would expect. Shooting is handled by waving the Wii-mote, which is a very natural and smooth action. Hold down the B trigger while waving and you'll do a slap-shot. Juke your nunchuck and you'll pull off a canned deke. Best of all though, is the IR passing which works like a charm. By mapping the passing to the IR receiver, it becomes possible to set up plays on the fly with an efficiency never seen in a video game. You'll never look at a video game powerplay the same way again. There are modifiers to play around with, but any gamer should be able to jump right in with only that knowledge. NHL 2K9 on the Wii is a simpler game of hockey.

Defence is a bit of a different story. I was unable to dive in front of shots to block them, and poke checking with the B-trigger felt haphazard at worst, unreliable at best. Still, shaking the nunchuck in order to check someone is very satisfying. Fighting works great too. Players punch with the Wii-mote and then balance themselves with the nunchuck. It's a great little system that will make you excited to drop the gloves every time.

In between periods 2K has included a charming zamboni mini-game that will either have you hooked or completely indifferent. I leaned a bit to the indifferent, but could also clearly see the addictive merits of the game. Players are required to steer by holding the Wii-mote sideways and steering it like a wheel. Players are scored by what amount of the ice they've cleared off, and getting close to 100% is a surprising challenge.

Beyond the charming mini-game, there are two other modes. Mini-rink, and pond hockey. Neither of these modes is particularly exciting. Pond Hockey is the same as the main game, but without line changes and custom hand picked teams. Mini-rink is the same thing, except in an egg shaped arena and two on two gameplay.

Also, this edition of the game is missing features that have been part of the 2K series for years, such as the skybox and minigames held within. 2K9 still features trivia during loading screens, but gone is the air hockey, the multiplayer challenges, and the unlockable treasure troves of jerseys, classic teams, and special rinks. All you're left with is standard franchise, seasons, and the aforementioned mini-rink and pond hockey modes.

Even online features of any kind have been given the axe for this initial Wii instalment. There is no online multiplayer of any kind, and not even updated rosters are available for download. Unless you're an obsessive NHL fan with a lot of patience, the rosters will be obsolete out of the box.

It also bears mention that the menu system is clunky and unintuitive. There are menus upon menus upon menus, and navigating them is confusing as all hell. Why 2K didn't allow for any sort of IR functions in the menu is beyond me. As it stands, trying to sign free agents, make trades, or edit lines in franchise mode is an exercise in frustration.

Also, while the franchise mode is pretty deep, it has some issues, mostly with the signing of free agents. After only one year, several free agents priced themselves right out of the league. Andrej Meszaros simply refused to resign with my team for anything less than $7.5 million over 7 years, and remained unsigned for an entire season because no team had the cap room for him. Even mid range players will demand $5 million contracts that are completely out of whack with the current salary cap and NHL salary structure.

Audio is pretty good however. The new play by play team calls a reliable, yet unremarkable game. Still, anything is better than a acoustic abomination that is listening to Bob Cole and Harry Neale call a game. The crowd noise is where the game really shines though. From skate blades cutting through ice, to the crowds chanting building specific songs and chants, helps offset the graphical issues a little bit. Kind of like how a good sense of humour can make you forget that you're talking to a 300 pound person who smells like asparagus and with a mole bigger than their nose growing out of their forehead. Ok, so it doesn't really make your forget how ugly it is, but it doesn't mean the audio presentation isn't impressive. Also, any game featuring the Offspring in its soundtrack is a game after my own heart.

Overall, NHL 2K9 is a respectable first effort with on the Wii. Still, the subtraction of key features from other titles and atrocious graphical presentation hold it back from any sort of rookie-of-the-year consideration. If you're a hardcore puckhead who only owns a Wii, then this is a fine place to start. Just don't expect more than a competent game of puck with a unique control scheme.