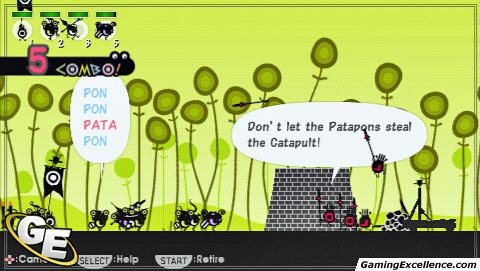 You'll have to forgive me, I've had this rhythm stuck in my head ever since I put that little Patapon UMD in my PSP. If you play this game, you too will succumb to the curse that is Patapon's infectious rhythm. Not that this is a bad thing.

If you've been looking for an amazing showcase for the potential of the PSP in terms of gameplay depth and originality, you'll find it here.

As the game begins, you come into possession of a pata drum, which when hit in time with the "pulse of the earth," awakens an army that has been forced into exile by the treacherous Zigotons. This army is known as the Patapon, a race of tiny eyeballs with legs and arms. By stumbling across this drum, they proclaim you Mighty Patapon, their new chief strategist and leader.

The game is played from a strictly two-dimensional point of view, with your advancing army coming from the left, and any enemies or obstacles coming in from the right. Enemies range from rival Zigotons and their bases to giant screen filling bosses.

You'll soon find other drums which make different beats, and this is where the real fun begins. Each face button corresponds to a different drum beat, and by combining different beats in rhythm with the pulse of the earth, you can issue orders to your Patapon army.

For example, a combination of square, square, square, circle translates to pata-pata-pata-pon, which means advance your army. Hit circle, circle, square, circle, and your army will attack. Despite these myriad of combinations, the catchy rhythms for each command makes them far easier to remember than you would expect. As the game progresses, you'll unlock new combinations that give you more variety in your actions, like defend, retreat, and activating miracles.

By hitting more complicated drum beats, your armies can bring upon miracles like sudden rainfall or hurricane force winds, which is the game's equivalent of magic. Issuing the right drum combinations at the right time is essential to your victory. Some levels will take a bit of trial and error to figure out, but a strategic mind will yield results satisfyingly quick.

The catch is, you can't just issue orders however and whenever you like. You must issue an order every four beats, lest you lose your string of successful orders. The more successful rhythms you make in a row, the more damage you'll make when you attack, or the less damage you'll take when you defend. After getting a few commands on the nose in a row, you'll enter "fever" mode.

Once in "fever" mode, your attacks will do massive damage, your defence will huddle tightly around your shielded front units, and you'll be able to cast miracles. Keeping the rhythm going in this stage is more challenging, and requires more accuracy in your drum beats than before, coupled with a slight change in the pulses of the earth to keep you on your toes. Keeping the rhythm is far from easy at the "fever" stage, and will likely cause some real frustration among the less musically inclined.

Keeping the rhythm going can also be a tall task if you're playing this game in public. Sound plays an essential part of the game, so headphones are an absolute must. Also, you can't pause the game except by putting the PSP to sleep, which completely throws off your rhythm anyway. While the game is on a portable system, it's not the most portable game in the world and has no sympathy for you when the real world comes calling. It's also important to note that some missions, particularly the epic boss battles can take up to ten minutes to complete.

On the other side of the coin, your rhythmic abilities will be counterbalanced by your strategic savvy. You begin with a small band of spearmen who are completely average in terms of defence and offensive capabilities. As you complete missions, you'll gain access to new kinds of soldiers like archers, axe-men, cavalry, and many more. The trick is, you can only take three categories of soldiers with you on any given mission, and your squad is capped at eighteen units. You'll inevitably find your own favourites for particular missions, but knowing which units are most effective in any given situation will make the game a lot easier in the long run.

You'll also come across lots of different equipment on your travels, which will strengthen you armies and their various categories, including attack power, defence, hit points, accuracy, and roughly a dozen more. Stats hounds will be in heaven with this game.

You'll also come across minerals, food, and money, all of which can be used to purchase new units, or play a fun trumpet playing mini-game with a dancing tree. Most of the time you will find these items on hunting missions that have your hunting animals like birds and hippos for food and supplies.

As you progress through the game, you'll inevitably get stuck on a hulking beast. It's at this point that you must essentially level grind by going on three or four hunting missions in a row, followed by battling bosses you've already defeated. The game tries to keep this fresh by levelling up the bosses each time you defeat them, but it makes things feel more repetitive than it should.

Other times, you'll get stuck on a particular mission, and the game will give you very cryptic clues on how to advance. Usually you'll have to go back to an earlier mission and find an obscure item that you didn't even know you needed. It's hard to resist the urge to look up an FAQ when you get to these portions, because the game certainly isn't helpful enough in of itself. The problem gets bigger as the game goes on and more levels are open to explore. It's not a game-breaking issue by any means, but it makes the game more frustrating than it should be.

Patapon features a charming graphical presentation with an absolutely outstanding art design. Considering the game was developed by the same team as the equally charming LocoRoco, this comes as little surprise. Your Patapon army animates beautifully, and dance in time with every drum beat you make. The art deign reflects each level very well. Despite its very stylized cartoon look, you'll never confuse a plain with a desert with a Zigoton base. Speech bubbles on both sides add hilarious charm to the game as well. Everything looks clean and beautiful here, and not a single centimetre of the PSP's screen is wasted. Simply gorgeous.

When you're hearing the same drum beats over and over again, it's shocking how fresh the music stays throughout the game. The game will take you nearly fifteen hours to complete, and you'll be tapping your toes to the music the entire time. Your Patapon army will sing back every beat to you, and once you hit "fever" mode, then you're in for a real acoustic treat. Even if the game didn't demand headphones for gameplay purposes, you'd put them on for the amazing acoustic show on display.

You'll likely relish every second of this unique and fun adventure, whether your tastes are more Final Fantasy Tactics or Guitar Hero. If you happen to like both, then you are in for a real treat. At only twenty dollars, this is likely the greatest gaming value of the year and one of the best PSP games to date. What are you waiting for? Pon-Pon-Pata-Pon!