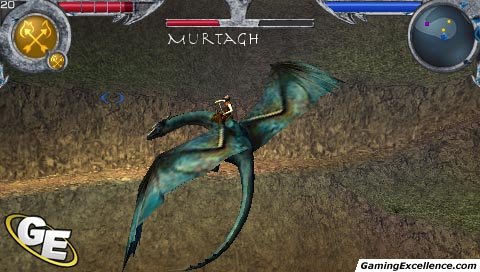 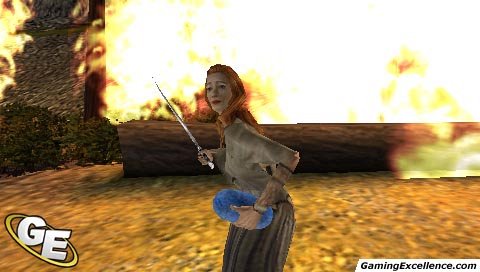 Eragon is a game published by Sierra based on the new movie of the same name by 20th Century Fox. The movie is based on a novel written by Christopher Paolini (who wrote the book when he was only 15 years old) and is the first of a trilogy he has written entitled Inheritance. The game follows the story of Eragon, a poor farm boy who finds a shiny blue stone in the forest. With time the blue stone opens up to unexpectedly reveal a dragon named Saphira. It is with this dragon that Eragon will attempt to defeat the evil Galbatorix and restore respect to the order of the Dragon Riders.

It's easy to see that Eragon was developed with high production values. From the moment you pop the UMD into your system you'll notice the ultra-crisp 20th Century Fox entry screen welcoming you, and visually this is only a taste of things to come. From the strong graphical content it's evident that this release was developed to the strengths of the PSP instead of porting over a scaled-down version from the big-boy systems, the result of using different development studios for the console and handheld versions respectively. One of the major issues facing PSP games are low refresh rates which can create a ghosting effect on the screen. Too much ghosting detracts a great deal from the enjoyment of a game (a la Grand Theft Auto Liberty City Stories for the PSP). Eragon doesn't suffer from any noticeable ghosting and its colorful palette looks amazing on the palm-sized LCD screen. The cut-scenes are decent and despite the sprites looking a little like drunk marionettes at times, are short and to the point so you quickly get on to your next mission.

The music in this game is top of the line. The advantage to creating a game based on a big budget movie is that you can use music from the movie in the game. The music in Eragon is really well done and adds a shade of grandeur that leaves a lasting impression. The sound effects compliment the game nicely and I especially love the sound of eating soldiers and animals (chomp). There is plenty of voice talent during gameplay as well as in the cut-scenes; but as with many other games it quickly becomes repetitive (especially when reattempting levels). The voice work is clear, not cheesy, nor over dramatic (which means the production staff didn't take any cues from the Gilmore Girls and for that we should all be thankful).

Loading times are a part of life and I was pleased that Eragon loaded up much faster than I would've expected for such a graphic-intensive game. I'm not sure how the developers packed that much content into such a short loading time but I am impressed.

Despite the pretty colors and sounds the gameplay of Eragon is a bit of a bummer. Most of the missions are concerned with protecting certain characters from the attacks of evil soldiers, dragons, and armaments which gets repetitive. Saphira (the dragon) comes equipped with the ability to breathe fire at shorter distances or to shoot fire balls at longer distances. Saphira can also use her talons to pick up objects like rocks or even enemy soldiers and wildlife. If you catch a soldier or animal within Saphira's talons you can actually toss them right into your mouth and eat them for extra energy; it's entertaining and nutritious! There's something about chomping down on an unsuspecting animal that is really satisfying. There are also various spells that can be picked up during your adventures which can be used by Saphira to get an edge on your enemy. Eragon comes equipped with a bow, arrows, and a sword. The bow and arrow is used during flight by slowly locking onto enemies and then firing. The sword is only used when you jump from your dragon to an opposing dragon and slice the crap out of the dragon-flyer. Controlling Saphira during gameplay feels like a chore. The dragon feels bulky to move and shift throughout the game especially in time-critical dragon-on-dragon situations. Despite my best efforts to control the dragon, I felt a lot like Ozzy Osbourne running the Boston Marathon: all the parts work but the timing's off. Saphira can fly forward in a normal or boost flight mode, strafe left or right, and cut a quick 180 degrees when the need arises. Despite the range of motion provided in the game some of the missions are akin to threading a needle and require multiple attempts for success. Missions are available to play after they've been completed, but once finished I really have no desire to do them again. I'm afraid the only replay value in this game is the multiplayer (and even that has limited novelty).

Eragon offers single and multiplayer gaming modes with crisp graphics and an explosive classical musical score. Despite the high production values, the gameplay and missions done with the oversized Zippo are disappointing. The game doesn't take a large amount of time to finish and lacks replay value. All in all, it's very suitable for a weekend rental.