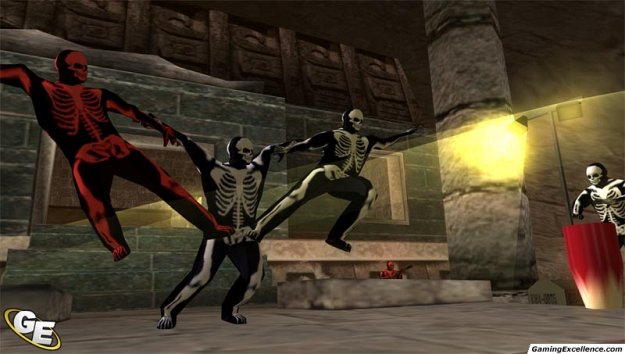 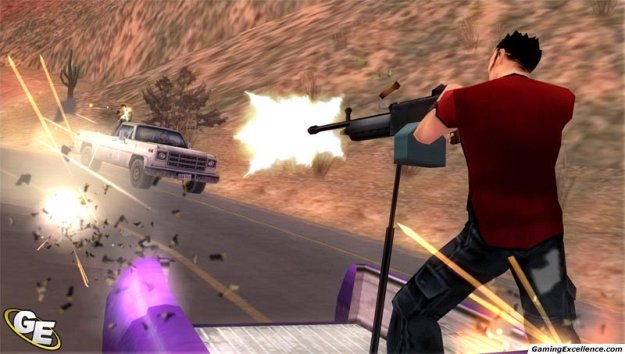 The shooter genre is still waiting for its handheld killer app. Both major handheld systems have their hardware issues that prevent them from producing a superlative shooting experience. Still, that hasn't stopped many game developers from giving it the old college try. Of the two major handheld systems on the market today, the PSP is definitely the platform of choice for the shooter fan, but has yet to produce a title that is on par with the console or PC platforms. This is mostly due to the PSP's lack of a dual analog setup as found on most console controllers. Despite being saddled with an inferior control scheme, the PSP is still home to a few awesome blast-a-thons, the best of which are Sony's own Syphon Filter: Dark Mirror and Killzone: Liberation. Still, two good shooters out of a sea of crap that includes Coded Arms, Brothers in Arms D-Day, and so much other shovelware is not a good track record. Eidos has listened to these clamoring shooter fans, and have produced the system's third best shooter experience. Chili Con Carnage certainly has a lot going for it that should satisfy hungry shooter fans, but like most PSP shooters it's not without its problems.

Chili Con Carnage opens with a hilarious bang. Ram (that's you) is going to visit his father at the federales' building. No sooner than you present your dad with a box of kittens does a combine harvester break through his window killing him and the kittens. What kind of sick bastard would do such a thing? It's up to Ram to take up his arms and find out, and the drug cartels in Mexico are his first stop.

Like many other video game shooters, Ram gets his answers by shooting everything in sight. Each level is packed to the gills with dozens upon dozens of enemies, all with itchy trigger fingers. If shooting lots of bad guys isn't enough for you, Ram can also target vehicles, explosive barrels (that enemies always conveniently stand near) and even chickens.

Ram has a lot of cool moves that make the game play a lot like Max Payne. Ram can dive in slow motion, run up walls, operate vehicles, and obtain a slew of special power ups. These power ups essentially turn Ram into an unstoppable killing machine in a few ways; including twin uzis that automatically kill everything on the screen, a golden gun that allows for 5 1-hit kills and my favourite, a pair of bullet spewing guitar cases. The guitar cases in general should be a dead giveaway as to what constitutes the main inspiration for the game, as the work of director Robert Rodriguez (Desperado and El Mariachi) is blatantly obvious here.

Speaking of influences, CCC liberally steals from other games, including the aforementioned Max Payne, and extreme sports games like SSX and Tony Hawk. As Ram plows through his enemies, a meter on the right side of the screen keeps track of not only how many people have been killed, but how stylishly you are able to take them out. If you pull a 360 slow mo jump into a head shot and have the bad guy's hat land on your head, you'll receive more points than if you just emptied your clip into their chest. The longer Ram goes without killing somebody, the faster the meter drops. Therefore, to get high scores it is in the player's best interest to keep the meter high by constantly moving and plugging enemies. High scores allow for new items to be unlocked such as levels, mini-games and weapons. At the end of each level you're given a final score based on how many enemies you've taken down, your best combo chains, how long you took, how many hats you've caught, and how many chickens you've killed. With some skill and practice, it is entirely possible to beat an entire level without the meter dropping to zero.

In between levels, you are given the option to fulfill challenge checklists that increase your score substantially. After a while though, the challenges ramp up to frustrating levels. Challenges include killing certain enemies in specific ways. For example, you may be asked to run up a wall, score a head shot and then have the enemies' hat land on your head, all while scoring a set amount of points by the end of the level. While killing people so stylistically is undeniably cool, the game doesn't always register your moves exactly how you wanted to execute them, meaning the challenge levels must be replayed over and over to get them right.

Rather than using checkpoints like most action games, CCC gives you rewind power ups. When your health drops to zero, the game gives you the option to rewind to ten seconds ago with half of your health restored. The mechanic isn't quite as solid as the one used in Prince of Persia, but it is serviceable enough. Once your rewind power-ups run out, it is game over and the level has to be restarted from the beginning.

Control wise, CCC is more solid than the average PSP shooter, but it still has significant issues. First, the fact that there is no strafe function in the game whatsoever will certainly result in dozens of cheap deaths. Also, since the game uses an automatic lock on function, there are issues with targeting enemies. All too commonly, targeting an enemy within six feet of your character becomes a huge chore. To score headshots, the player must hold down the target lock button for two or three seconds until the reticule turns yellow. It's a neat mechanic that allows for somewhat precise aiming that wouldn't otherwise be possible with a PSP control scheme. Due to the finicky analog nub on the PSP, the camera feels far too loose. I encountered more than one occasion in which I wound up looking straight up at the sky while bad guys were pumping my kidneys full of lead. Also, it's a pain in the ass that with all the moves at his disposal, Ram can't climb a box that's higher than his hip. Still, despite the obvious control problems, it never gets so bad so as to completely break the game.

Graphically speaking, CCC is about average for a PSP game. Ram animates quite well. As he dives slowly through the air, you'll see shell casings fly out in slow mo, sparks will fly, and his body twists and contorts just like it should. Beyond the main characters though, all the enemies in a given level look exactly the same and animate stiffly. Background textures can be blurry and poorly defined. However, the game is also colourful and bright. It's never ugly per se, but there is certainly room for improvement. At least the frame usually stays pretty solid. The game's cut scenes are lots of fun to watch, and look and animate very well.

In terms of acoustics, CCC shines. The voice acting is appropriately cheesy, and gunfire erupts convincingly from the PSP's tiny speakers. The game's soundtrack is a mixture of Mexican music and rap, which may not suit everyone's taste but suits the mood of the game perfectly.

CCC is a fun shooter romp for your PSP. If you can look past its faults, there is a lot of fun to be had here. There's plenty to see and do, and even if you only play through the main story, you'll find plenty of fun within the game's seven to eight hour running time. Besides, driving a car through a gate, diving out in slow motion and scoring three headshots is undeniably exhilarating. CCC is just a whole lot of mindless fun that is likely the only title to ever feature explosive poultry. Turn off your brain and enjoy.