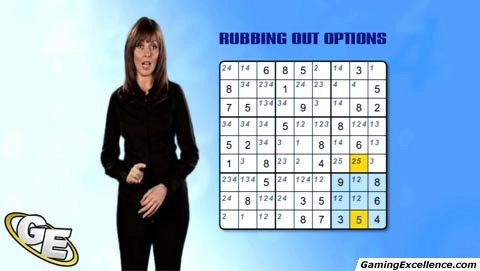 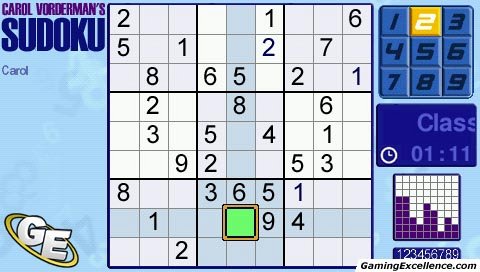 It's happened again. Another Sudoku game has made the transition from your daily newspaper into the world of video games. There is no shortage of comparable options out there but Eidos Interactive has brought out some serious artillery to back its game. That artillery goes by the name of Carol Vorderman; she's not only a Sudoku master, but she gets behind a very solid title that provides a bevy of over a million puzzles to solve, interesting gameplay selections and some helpful tutorial videos that could prove very useful in aiding you in your quest to knock Carol off her throne as the Sudoku master.

The path to becoming a better Sudoku player starts at the beginning, and for some people this means an explanation of what the heck Sudoku is. In Sudoku you have a total of eighty one miniature squares at your disposal. In some of these squares there are numbers ranging from 1 through 9. To successfully complete a puzzle, you need not only to place these same numbers in the remaining squares but also each column, row and the nine 3 by 3 mini grids need to have all numbers in place without any duplicates. Depending on the difficulty of the puzzle and your overall skill level, this process could be anywhere from relatively painless to virtually impossible.

Thankfully, the control scheme for CV's Sudoku is simple to grasp. You use the D-pad or analog stick to move the cursor to the square you desire and pressing the X button places a number in that square. Another very helpful feature included in this game is accessible by pressing the circle button. By doing this you place a tiny number in the square which represents where a potential integer may belong. Eventually by eliminating other possibilities and using other Sudoku strategies, you will be able to determine which number goes in that particular square. This tactic is an invaluable one that polished Sudoku players will rely on to complete the more extreme puzzles. The controls will not pretzel your fingers the way a game like Guitar Hero would, but you might get tricked up once in awhile with the clock ticking down while working in a frenzy like state to finish a puzzle.

CV's Sudoku offers a fair variety of gameplay modes for both individual and multiplayer needs. You can practice by choosing a classic puzzle, one of the arcade style games or use the questionably named Sudoku solver to generate your own diabolical creations. Got a few friends around? The multiplayer mode allows for virtually as many people as you'd like to play along. On the PSP, with the exception of the head-to-head game, all of the multiplayer options can be played on a single unit. No game sharing is required.

CV's Sudoku's meat and potatoes is its career mode which takes you through thirty-six puzzles set over seven levels. You start as a humble white belt working your way to the esteemed black belt. An interesting concept, but really this is just a fleshed out version of the classic mode where you still complete puzzles of increasing difficulty and are rewarded with a score dependent on time spent. It would have been nice if Atomic Planet was able to incorporate some of the arcade or multiplayer games to give your career a little more variety.

Also included as an extension to the career is the challenge Carol option in which you are given more challenging puzzles and a set amount of time to complete them. Although you can access these before completing the career mode, some of these puzzles are just downright brutal. They may even require trial and error methods to be able to solve them. This is not a fault of CV or her game but the actual mechanics of Sudoku. Still, it could leave some gamers feeling understandably frustrated.

Even if you are on a mission to take Vorderman's spot as the Sudoku master, she's still willing to lend a hand. Her tutorials are well done and can be quite good at either ironing out the finer details of your game or by improving your skills exponentially. Along with her providing tips and tricks, there are also visual aids that show you more precisely how to put the tips to good use. Even her video about the history of Sudoku gives you some interesting facts, such as the game's origins and its other lesser known identity Latin Squares. Each video is fairly lengthy but are well worth a watch.

While the PSP version is practically identical to its PS2 and PC counterparts, it exceeds its brethren by allowing you to take your Sudoku on the road with you. It's easy to pick up to play a few puzzles while waiting for the bus, and is also great for those who want to conquer the some million or so puzzles in extended sittings (or standings depending on your preference). The amount of puzzles offered is more than any paperback equivalent can provide. CV's Sudoku's success lies in its simplicity. However this does not mean that Vorderman's game is not without a few minute shortcomings.

Although the game is kept simple for good reason, the graphics do look decent with the brightly coloured backgrounds and menus. The main gripe here is that you get the same coloured backgrounds, same coloured numbers, and same coloured grids for every single puzzle. Even the Nintendo version of Tetris mixed up the colours of the blocks after every ten lines, so by comparison CV's Sudoku looks can feel pretty stale after a while.

Since this is a game about Sudoku, you won't get any of that razzle-dazzle that you'd expect from a next generation title. What you do get is some excellent Sudoku which is recommended for anyone who's a self proclaimed expert and for those looking to graduate from the traditional puzzles found in newsprint. Even with a healthy dose of competition out there, Carol Vorderman's Sudoku is one of the best gaming renditions of Latin Squares available.