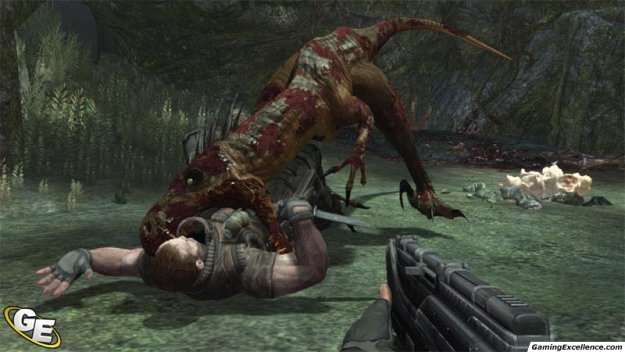 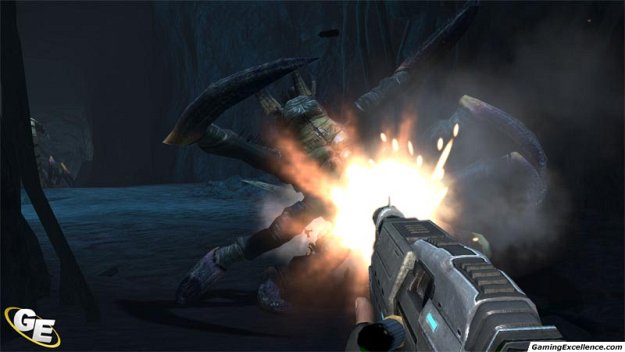 We recently had an opportunity to sit through a playable presentation of the upcoming Turok release scheduled for the Xbox 360 and PlayStation 3 early next year. Josh Holmes, Studio General Manager of Propaganda Games, the Vancouver developer at the helm of the next Turok release led us through an early demo of the title.

First off, the next-generation Turok game has been built from the ground up from a development team comprised of individuals from some of gaming's biggest names, Splinter Cell, Prince of Persia, Quake, well you get the gist of it. Propaganda has taken the storyline, the world, the characters, and started from scratch. It's a refreshing change from the later Turok games that felt shallow to many.

You are Joseph Turok, an ex-Blackhawk soldier who's been brought back into the military and combined with a team of Special Forces. You are on a mission to track down and capture your former mentor, Roland Cain. The game opens with your ship approaching the planet where Cain is suspected of hiding, and as it approaches the surface it is obliterated in the sky, and crash lands in the jungle below. The game is a struggle to survive, not only from Cain and his men as they hunt you down, but also from the vicious dinosaurs and creatures native to the planet.

Minute to minute, the game is oriented as a struggle for survival. Players will be able to make use of a vast arsenal of weapons, ranging from the standard knife and light guns, to a variety of innovative new weapons. In addition, a variety of vehicles will be playable as Turok makes his way through the terrain.

The dinosaurs in the game introduce a strategy element to combat. As similar to King Kong, the dinosaurs in the game are intelligent-thinking creatures; they are predatory animals that will attack both you and your enemies, so learning to lure and manipulate them will be an essential skill in this next-generation Turok release.

Visually, this game is looking sharp. Having licensed Epic's Unreal 3 engine, the character animation and environments are spectacular and surprisingly polished. The environmental ambience in the demo was immersive. From the loud thumping as a massive T-Rex approached to the shrill screams as bodies were ripped to pieces inside the jaws of these vicious creatures, it was an engaging experience to say the least.

Propaganda Games have stepped up to the plate and accepted the challenge of taking on the Turok franchise. The build we had a chance to see was still very early in development and more then a year away from release. However it's a title with a lot of promise and we look forward to looking into it further as the release approaches.