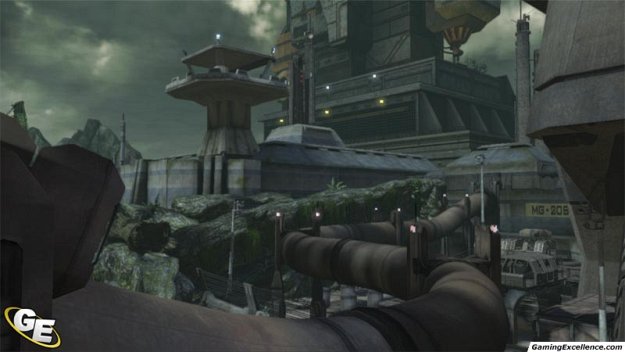 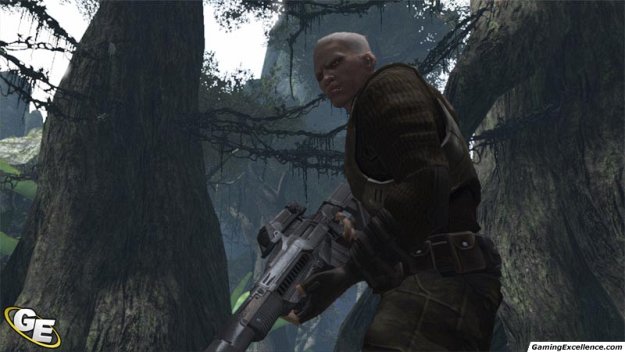 Any game developers out there who are looking to create an ambitious title should heed Turok as the portent of warning that it is. Nay, this is not just a game, this is a harbinger of the dark times, the times wherein those who seek to create games too big for them to handle are to be smote. Heed me my brethren, Turok is a great gaming concept; truly this is a game that stood to be something stellar. Instead you have a clunky first person shooter attached to an interesting locale, and dinosaurs.

When Turok was initially announced it was purported to be an open environment game, full of neutral dinosaurs that could be used to fight your enemies with careful maneuvering. The dinos would be the "X Factor" as it were, the little something special to intrigue people in the game and set it apart from the other first person shooters on the market. Unfortunately there are a slew of problems with the game that have mostly sunk the ambitious title and mired it in the swamp of mediocrity.

Let's not be too negative though, Turok does some things incredibly well. The game looks fantastic in motion and it flexes its rather impressive muscle during some of the levels. It scared the living daylights out of me the first time the lightning crashed during the night time level and the ambient lighting in some of the underground caves was astounding. That says nothing of how good the enemy models look: each of the dinosaurs has a realistic and very animalistic look about them.

In addition to that, the game has a wonderful assortment of weapons. All of the FPS basics are present but with a neat twist. Sure you have a shotgun, but it can be used to fire a flare at dinosaurs, drawing them to a location such as a group of enemies. And that submachine gun can have a silencer attached to it. But the major focus of Turok is his trademark bow and knife; this time around the bow has been updated to have a more sci-fi look. Using the bow you can snipe off enemies from a distance silently. Enemies will not react to a friend being killed unless they witness it. Thus, if you do it in the high grass nobody will even notice, which lets you pick them off with ease. Even better is the knife, which can be used for stealth kills or just to perform instant kill attacks on a charging Velociraptor. It brings an interesting twist to an otherwise straightforward game.

Those are the major selling points of the game, and unfortunately the weaknesses more than outshine the good points. A number of game design decisions were made that seem totally perplexing and stack the game in favor of the enemies. Many people talk about how a video game "cheated" on them, well this won't be one of those games. The developers have blatantly stacked the deck, and it's not in your favor.

You might wonder what I'm rambling about, but it all boils down to one thing: Turok is a wuss. He regenerates his health when not under fire rather quickly, but cannot take much punishment to begin with. All it takes is one enemy with a submachine gun to ambush you and you're dead. It is entirely likely that you will fight through an enemy stronghold, barely wiping them out and get blindsided by one lone soldier and killed. Meanwhile you're just sitting there, mouth agape wondering what just happened. This happens far too often.

To complicate this is the knockdown mechanic that has been much talked about. Whenever a dinosaur hits Turok or a grenade explodes nearby he will be knocked on his rear end. As you move to get up, you'll find yourself facing in a random direction. If this mechanic was used sparingly, it would be a really nice addition. As it stands, you'll find yourself blown backwards far too often; even dinosaurs will use it to pull off combo attacks that result in instant kills. The shockwave can even knock you out from behind cover letting enemies pummel you to death with ease.

It's almost like every time you start to enjoy yourself the game does something to crash it into the floor. Just sniped off a bunch of enemies in the distance? Most excellent. Oh wait, a dinosaur just blindsided and killed you. Later in the game you'll find yourself deluged by grenades and getting flung all over the place. And the worst part is that due to the twisting, rambling level design, in some areas you might play for upwards of twenty minutes, get slaughtered rather abruptly and then have to replay that section all over again. Since you can't just save the game when you like you will find yourself doing this quite often. A save system entirely based on auto-saves at checkpoints just isn't user friendly. If that's not enough to turn you off, enemies also seem a little too omniscient. If you can barely hit them at the distance with a sniper rifle, why are they so accurate with their mini-guns? Mini-guns!

Another gripe with the game that damaged my ability to get drawn in was the lack of customization. You cannot change your control scheme at all, and the control setup, frankly, stinks. Anyone who plays plenty of FPS games will likely get tripped up by the odd placement of the buttons. Tack on the lack of subtitles and the fact that you have directional hearing (i.e. you can only clearly hear what's being said in the direction you're facing) and sometimes it sounds like Turok is talking to himself.

Sadly, a fun game gets annoying due to omniscient AI and nebulous level design. While some of the individual parts show promise, the overall picture of Turok is really rough around the edges. Fans of the previous generation of Turok games may find this release to be a compelling addition to the franchise. For others, we'd recommend renting it first.