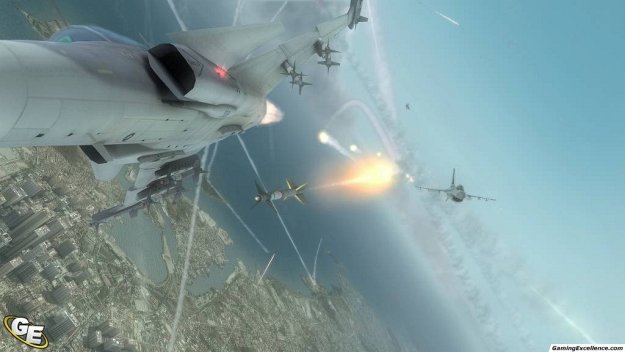 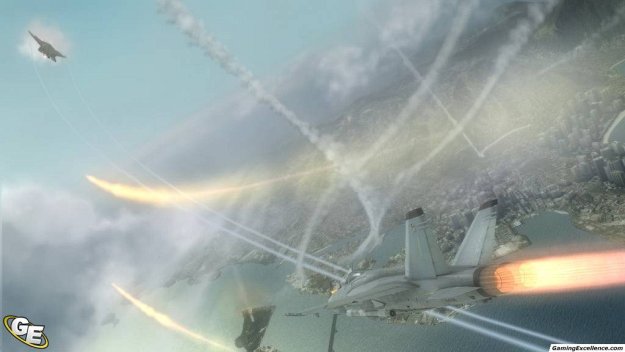 I have a bone to pick with Tom Clancy. In the past ten years, I've given most of his franchises the ol' college try, only to give up in frustration because his games are simply too realistic for my tastes. Rainbow Six, Splinter Cell, and even the older Ghost Recon games gave me fits of anger that belies my easygoing demeanor. However, ever since Ghost Recon has evolved into the Advanced Warfighter series, the series has been the exception. GRAW, as it's mostly called these days, is an intense, realistic and well polished shooter, and it's now available on that shiny new PS3.

GRAW 2 picks up immediately the events of the first game and features an engrossing storyline which feels frighteningly plausible in today's unstable political climate. It's a few years into the future, and a Mexican rebel force has overtaken the Mexican government and has set up shop on the American border in Juarez. Worse still, they have acquired a nuclear weapon. Therefore, it is up to Ghost Leader Scott Mitchell and his Ghost Squad to make the world safe for the American way of life. The storyline is presented mostly in transit from one mission to the next, with newscasts interplayed with your commanding officer explaining your next objectives. The plausibility of the story makes the gameplay feel that much more intense with everything that is at stake.

Missions range from desperate defend-and-hold situations, a few escorts, and search and destroy rebel hunts. The game thankfully has fewer sniper hunts than the first game.

Luckily, GRAW 2 makes it really easy to identify your objectives and where to go to accomplish them. GRAW 2's gameplay essentially boils down to finding the yellow square that highlights your next objective and eliminating any rebels between you and said objective. Luckily for you, Mitchell has access to the cross com, a futuristic visor which has lots of useful features. These include the POV of your UAV (a little flying gyrocopter with a fitted camera), giving you updates on your squad's orders and health, and updating your objectives and highlighting the position of rebels in your vicinity.

Beyond the cross com, you're given access to a wide variety of toys to help you in your missions. Occasionally you'll be given support in the form of a mobile remote controlled safe that contains weapons, medkits, and works as mobile cover. Very occasionally you'll also get support from Blackhawk helicopters in the air. Of course, you also have your trusty squad at your side for most missions.

The interface for issuing orders is elegant and simple, even under fire. You press left or right on the D-pad to cycle through different supports such as squad, UAV and the like. Most orders are context sensitive, and issued by pressing up or down. You can also call up a map of the area at any time and issue direct orders for movement or action on any point on the map.

The AI in the game for the enemies provides a stiff challenge, even on normal difficulty. No matter where you are, the enemy AI will spot you after only a single shot, and will keep you in their sights no matter where you move to. It also doesn't help they could shoot fleas off a dog's back from across a football field. Your compatriot AI is better than average, but occasionally they make some real boneheaded decisions. For example, I placed a C4 charge on an enemy tank that they were taking cover on. I ordered them to follow me away from the soon-to-be-incinerated tank, to which they replied "no." Of course, the tank went up, and I heard three simultaneous screams of "MEDIC!" Still, aside from a few hiccups, the AI does a good job of watching your back and giving you helpful hints to be more effective in battle.

As for your own controls, Mitchell moves quickly and slams to cover effectively. You can peek and fire around corners, and you'll have to get used to taking cover often and quickly, or get used to the game over screen. Like most Tom Clancy games, this is not a run and gun shooter. You'll have to use suppressing fire and flank the enemy to be successful.

The PS3 version introduces new Sixaxis controls to the mix that are a complete gimmick and waste of time. You can tilt the controller left and right to roll, pitch it forward to backward to dive or slide, and aim your sniper rifle with the tilt function. None of these functions are particularly precise, and you'll find yourself diving or sliding a lot by accident if you play with the Sixaxis controls turned on. I turned them off two missions into the game.

Unfortunately, GRAW 2 is short. Really short. You can beat the single player game in about four hours if you're even halfway decent at it. Luckily, Ubisoft has included an impressive suite of multiplayer features that outshine even the 360 version. Multiplayer over the PlayStation Network was refreshingly lag free, and there's a ton of game types ranging from every man for himself deathmatch, team versus team games, and co-operative team objectives, in addition to some levels of the campaign. The PS3 version also introduces several game types and maps that aren't present in the 360 version. The servers are well populated at all hours, and I never had any trouble jumping right into a game. GRAW 2 makes a strong multiplayer showing on the PS3.

The PS3 version of the game has a few issues that weren't present in the 360 version too. I had the game lock up on mid-mission loading screens a half dozen times in one play through on the campaign, but at least the game would auto-save right beforehand. The game also doesn't run quite as smooth as it does on the 360, although the frame rate never gets so bad as to become an issue that hurts gameplay.

Whichever version of the game you play, you're guaranteed to be getting one sexy feast for the eyes. GRAW 2 is simply gorgeous. From the impressive HDR lighting, the outstanding flame and explosion, particle and smoke effects, and high definition graphics, GRAW 2 places you right in the thick of an urban battlefield.

Audio is very impressive too. The voice acting is merely average, but the sounds of war will come through your receiver and assault your eardrums. All this is helped by a thumping and adrenaline pumping orchestral score that really gives the game a Hollywood war movie feel that simply could not be achieved any other way.

If you're hungering for some good tactical shooting action for your PS3, you could do a lot worse than GRAW 2. Ubisoft has creating a culturally relevant, intensely playing shooter than must be experienced if you have any interest in the genre. Sure, it's pretty short, but there are no slow spots to speak of and the game is never boring. Throw in an excellent multiplayer game, and you've got an excellent reason to make GRAW 2 a purchase. GRAW 2 is highly recommended for any tactical shooter fan.