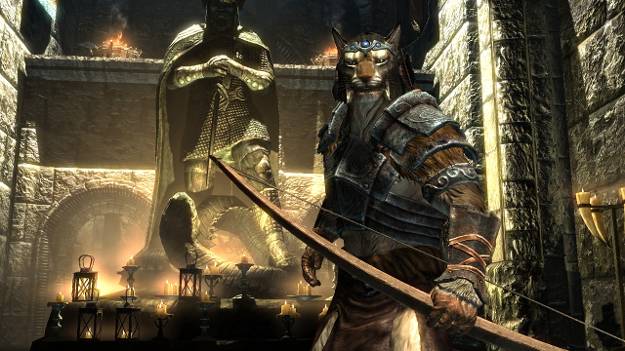 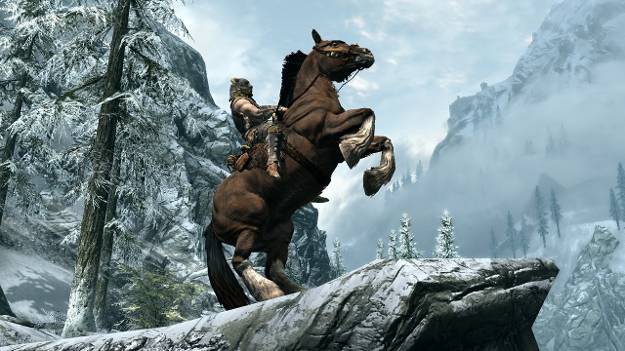 In one of the most popular booths and games of the show, I watched a developer play through a few areas of the newest chapter of the Elder Scrolls series. After the smash-hit Oblivion, I was curious to see what Bethesda could do with the series, and the answer was fairly clear: more. There's more to Skyrim than any other Elder Scrolls game to date.

First, the developer started the demo by telling us about how they've started from scratch in Skyrim: a new engine, new scripting system, new combat mechanics, essentially new everything. Then we were taken into the world of Skyrim, a mountaineous region of Nordic-themed settlements and legends.

First, the combat system was shown off. It's fairly different with what previous titles have had, where you were forced to either use magic or melee attacks by switching between them. This time around, the developers have given the player two hands, each controlled by a seperate trigger (or, presumably, seperate mouse buttons), which means two ways to attack. Equip an axe in one hand and a fire spell in the other, or two spells in either hand. Interestingly enough, if you put the same spell in both hands, you can use a more powered-up version of that spell, so pure-magic builds would have their benefits.

We were taken through the countryside, killing wolves and bandits along the way, and were introduced to a number of new gameplay mechanics. Guardian stones, for example, would raise the rate at which you learned certain skills. Kill cameras, a la Fallout, have returned. And you can run around harvesting plants if you so desire, something that I've been looking forward to since I did just that in Morrowind.

The inventory system has been overhauled, allowing you to go through your pack, sorted by weapons, ingredients, armor, and so forth. Each item has a 3D model that you can take a look at if you're interested in that sort of thing, to noticed the detail of the engravings on a particular shield, for example. These models aren't just for aesthetic's sake, either: a puzzle we were shown involved taking a look at a claw-shaped key to find a sequence of symbols on it that would allow us to move through a locked doorway.

Skills have also been revamped slightly. Looking up at the constellations in the sky (via the menu) will reveal your skills and your strengths in them, instead of just staring at a list. Each of these constellations represent a single skill, and each star represents a 'perk'. These perks, earned by levelling up the skills, allow you to select bonuses for each particular skill, with different perk trees for each skill.

There are also new magic types that we were shown. The first, rune magic, is a unique type that acts as a sort of trap system, allowing you to lure in enemies onto glowing runes that you've created. The second isn't technically magic, but is something called Shout abilities. These abilities, not all of them used for combat, are a fairly unique kind of ability: to unlock them, you must find 'word walls', scattered around the world. Then you need to do something a little tougher: kill a dragon. Dragons are back in Skyrim, incidentally, and are large, deadly, and filled with a whole lot of death.

There's quite a bit of Skyrim to get through, and we couldn't see everything there was to see in the world, but after taking on some mountain trolls herding their cattle of mammoths, and calling down a thunderstorm while fighting dragons, the gameplay demo ended. Skyrim looks impressive, and will be out on November 11th of this year for the PC, PS3 and 360.