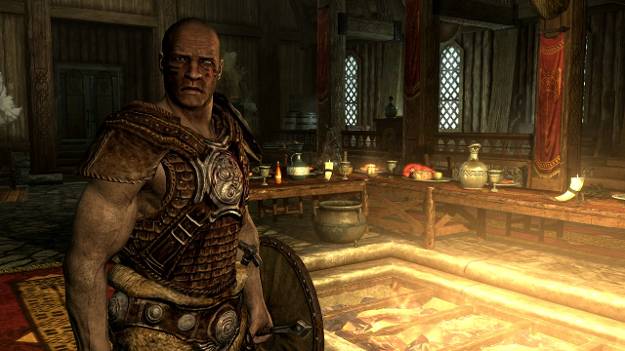 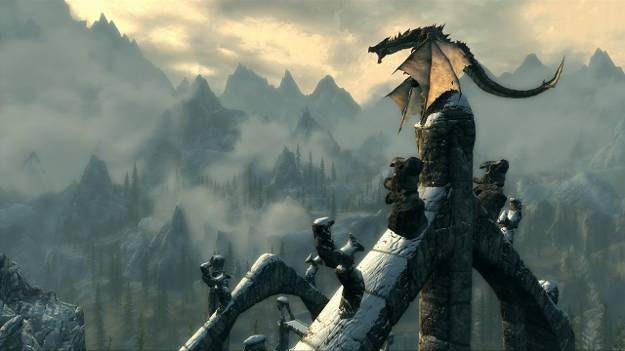 As a dedicated fan of the Elder Scrolls series since the first entry, Arena, there are very few games that excited me as much as this release. Sure there were other games I wanted to play this year but nothing got me as excited as opening up my favorite websites only to find a new Skyrim trailer or developer diary greeting me. When the game finally ended up in my hot little hands I couldn't wait to tear that bad boy open and dive on in.

It has been glorious.

The Elder Scrolls: Skyrim follows a character that you create on his journey to navigate the political intrigue that is tearing Skyrim apart. While dealing with agents of a foreign Elven power and a civil war between natives loyal to the Empire and a rebellion there's the small matter of dragons reawakening throughout the land. Alduin the World Eater, a God of death and destruction to the Nord people, has awoken. As his name might tell you this is a big problem that can only be solved by you, the Dovahkiin.

Your innate gift allows your character to act as the perfect Dragon slayer. Harnessing the same magic that the dragons use to breathe fire and ice or even cause storms the Dovahkiin can use his Thu'um, also known as The Voice or Shouts, to battle the beasts. By using the captured souls of dragons as well as absorbing the knowledge found in mystical sites across Skyrim, areas known as Word Walls, only he (or she) can stop this threat.

While the dragons are the main story here the political plot is actually incredibly interesting. In a lot of ways the plot is similar to that of Dragon Age 2 except, ya know, done well. Neither side is portrayed in a very positive light; the Imperials coming off as almost jingoistic types quick to execute their enemies over religious or political differences and the Stormcloak rebels are serving a man who seems awfully self-serving, having killed the High King of Skyrim in an attempt to take his throne.

In a lot of ways the land of Skyrim feels very much like Cyrodiil did in Oblivion. It's very vibrant and alive with lots of native animal life, both hostile and neutral, gorgeous views and lots of crap to find all over the place. But where Cyrodiil was eventually overtaken by Oblivion gates here you have the pleasure of dragons getting more and more common as the story goes on. Random villages are attacked, they fly by the gates of cities, start fights with Giants and Mammoths and attack while you're trying to explore. This makes the adventure incredibly tense as there's the nagging threat of winged death at all times.

Many changes have been made to the gameplay, some of which are likely to anger longtime fans of the series. It's a pretty long list that you can find online with some searching but we're going to touch on the important ones.

Perks have been brought in from Fallout 3 but they are used differently, granting you passive bonuses (such as being harder to detect with Sneak or doing more damage with One-Handed weapons) or special skills. These will dramatically change your experience since even two of the same type of character could be crafted differently by using different perks. Since each type of character has its own benefits this makes character customization feel much more open and flexible. Your two-handed warrior may play totally differently than your friends which add a nice feeling of ownership to your character.

Skills have once again been streamlined. Mysticism has been removed, its spells being wrapped up into other schools of magic to streamline the amount of skills you need. Athletics and Acrobatics are gone completely but in their place is the ability to sprint at the expense of your stamina. Speaking of Stamina you no longer use it up when attacking enemies. It is now only being used when you sprint or use special abilities like shield bashes. This frees you from worrying about Stamina unless you're using it purposefully, leaving you to focus on your health in the now chaotic fights.

Perhaps the biggest change has been to the combat system which has received a massive overhaul. Instead of just standing there hacking at each other combat is a more interactive affair. Blocking is now reaction based; by timing your block perfectly you can deflect an enemy's attack and leave them open for a counterattack. If you don't do this then you can just reduce the amount of damage coming in by holding down the button. This also means that dodging around is much more important than it was before since it's easy to get overwhelmed by groups of enemies since they will work in tandem, one blocking to deflect your attacks while another attacks you freely.

This has the added effect of making the melee combat much more tactical in nature. Using power attacks or shield bashes to break enemy blocks before landing carefully aimed attacks is an absolute necessity. Well it is unless you just decide to dual wield two weapons and go nuts on your foes, hacking away with no thought to your defenses.

Yes, dual wielding is a big option here but it's not quite as good of an idea as you might think. Since both of your hands are devoted to pure offense this will leave you with no ability to block. This means that moving around to avoid your foes is going to be more important than ever for a character built like this. It's possible to put an offensive spell in one, or both, of your hands to make this even more fantastic. Swinging at your foes with an axe in one hand while using ice magic to slow them with the other is a very viable tactic for dealing with foes that prefer ranged combat.

The land of Skyrim is a bit less colorful than Cyrodiil but it is still very varied in nature. Trudge through partially frozen swamps, climb up mountains through freezing snowstorms or stalk your prey through a thick forest as it pours rain down upon you. It honestly feels like adventuring around a real place at times, an effect that is doubly true when snowstorms strike. Trying to climb a ridiculously narrow mountain path while your vision is obscured by blowing snow is treacherous as it gets but very immersive. I'm not ashamed to admit that I've walked off of a path while trying to fight a Frost Troll in the midst of a storm.

Jeremy Soule returns to do the music for the game which is phenomenal as usual. Honestly it's just par for the course. What is an even better change is the wide variety in voice acting. There are a few actors who are repeated regularly, notably the city guards in every town, but the cast has a wide enough variety that you don't end up with Oblivion level silliness of people talking to themselves.

Then again a lot of attention has been paid to improving on the civilian actions and dialogue. Talking to people no longer freezes the world in place and the conversations are much more dynamic. Blacksmiths will talk to you while they sharpen weapons on a grindstone and others will talk while operating lumber mills. There's also a lot more body language in the conversations with shrugged shoulders, hand motions or even suggestive poses from some NPCs. Since the civilians are all going about their daily routines it gives the cities and villages a living, breathing feel to them.

Most of the glitches we've heard of so far seem to occur on the PC version with PCs that don't well exceed the recommended specifications. As of now the only issues experienced on the console are some slowdown in graphically intense areas (like dragon fights) and some quest glitches. For example in the city of Markath you will be confronted inside of a shrine. Sadly even after finishing up the quest the instigators remain in the shrine permanently so if you ever enter again they will prompt you to restart the whole quest except this time it can't be completed. This seals off the building, preventing you from using the shrine again. Unlike the other glitches that plagued previous games by Bethesda this seems like a small oversight that should be easily patched.

Skyrim is about as perfect as a game is going to get for fans of the RPG genre, especially those who lean towards the action RPGs. Barring a few very minor issues that do nothing to damage the package Skyrim is, without a doubt, one of the best games released in 2011 and a serious contender for Game of the Year. Only Dark Souls comes close in pure RPG goodness and Skyrim does it without making you invent new languages to swear in.