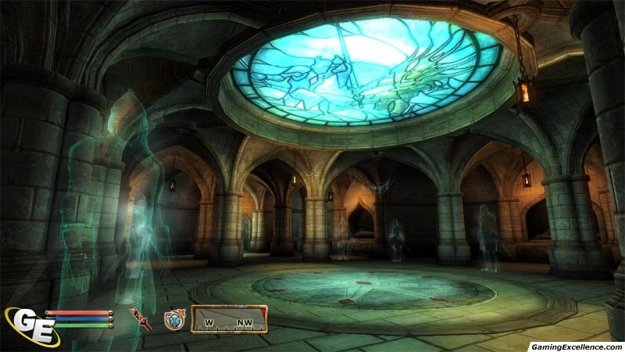 While it is quite possible as a reviewer to write paragraphs, if not books, on the merits, improvements and details of Oblivion, it would simply be a disservice to anyone reading it. The Elder Scrolls IV: Oblivion is, simply put, the most complete and most amazing experience to be had in videogame form, bar none, and everyone should be playing it rather than reading about it. Everything that you may have heard about it is true. Everything you knew about Morrowind has been bettered and perfected. And yes, Oblivion is more than reason enough to buy a Xbox 360 for. As a reviewer, I can't recommend a game more. As a fan of the series, I have a lot more to gush over.

Oblivion begins, as expected, with a powerful monologue delivered by a King very much disillusioned by his fate. As he flees his own castle through the underground prisons, fate also binds him with our hero. Soon, the King shall be dead and you will be tasked with not only finding his heir, but saving the Tamrielic Empire from the grips of Oblivion. And this is, quite simply, how our quest begins. Before it is all over, we will have entered and closed Oblivion Gates, joined Factions and Guilds, fought in the arena, spied on people, killed others, trained, journeyed, escaped vampires and disease, bought houses, become a hero, stolen a few things here and there, and even spent a night or two in jail. Oblivion is a videogame, but make no mistake about it, it is also an experience like none before it. From its level of interactivity, pacing, detail and depth, you never just play Oblivion. You live Oblivion.

As with Morrowind, your first step is creating a hero for your adventure. All previous races and classes return along with a character editor not unlike Tiger Woods' PGA Tour. You'll also choose your birth-sign, attributes and specialization. After the prison tutorial, and the jaw-dropping awe of leaving the underground tunnels, you'll begin to realize how different Oblivion is from its predecessor.

Combat, which felt like a dice roll in the previous game, has been changed to behave more like a true hack 'n slash title. You hit what you hit and block what you block. All the combat is now physics based and so much better. The controls are perfectly mapped and responsive, and combat when it must be done, feels like an extension of itself rather than a chore. Magic, which is sometimes even more fun than a sword, not only looks amazing, but seems less clunky than in Morrowind. The addition of hotkeys (on the D-pad) which can be mapped out and assigned to anything in your inventory also helps changing spells easy on the fly. And, as with Morrowind, the magic, combat and leveling up can be abused early on which, like in the previous title, adds even more incentive to experiment. It should be noted that all characters/monsters in the game level up accordingly to your character's level, so there is never an area that remains off limits until later and the main quest can be completed at any time.

While there is a story-line to Oblivion, which can last you up to 40 hours to finish, there are also a million other things to keep you from it. After almost 180 hours of Oblivion, it's become quite clear to me that I will never see everything there is to see, but I will go back to it again and again regardless. Oblivion is that big. There is always something to do, many quests to complete and guilds to join. There is also the simple pleasure of walking from one town to another and seeing what happens. While Morrowind seemed immersive at first, there seemed to be something missing from it. Not so anymore. Oblivion feels alive in every way and even after 180 hour of playing it, I am still surprised by what I see and hear.

At its core, Oblivion is an RPG and as such must have the obligatory inventory/quest/map/hero interface. As a fan of many RPGs, I know this is a make or break issue with many games, but Oblivion handles the complexity of its interface with style and ease. You'll be overjoyed by how easy all the information is presented and how easy navigating around the interface is. And while the quest/map screen seems to hold the user's hand a little, it also makes fast-traveling between towns so much quicker.

The audio presentation in Oblivion is not only fantastic, but staggering in scope. Every character speaks (and unlike Morrowind, everyone actually has something different to say), and every character has his own life to attend to, which also includes dialog. Add to this the fact that their lives will change depending on your actions and exploits and it becomes incredible to note that the audio never reverts to being generic. The soundtrack is Academy Award worthy and the voice-work (while sometimes a little uneven) is intelligent and exceptionally well done. The most humbling comment regarding the audio presentation I can make is that even after 180 hours in the game, I never skipped a line of dialog and still found myself stopping on the side of the street to overhear NPCs have conversations about inane things.

Graphically, it's impossible to imagine a videogame world feel more real or more detailed. While the character faces/eyes sometimes seem very videogame-like, the world around them never falters in its realism. Water, birds, deer, grass swaying, the passing of time, weather; Oblivion effortlessly recreates reality in such a way that going outside feels anti-climactic. Each object has its own physics, weight and innate properties. Each body, sword and shield behaves differently based on size and weight. And Oblivion lets you manipulate everything in the game you want (or dare) to touch. Position bodies as you see fit, leave objects wherever you like; the game lets you do as you please. Add to this the various architectural schemes found in every town and you can't help but be humbled again at the magnitude of effort and detail that went into Oblivion. Yes, the game loads frequently (but quickly) and sometimes pulls you out of the reverie, but it's a fair tradeoff considering the size of the world you walk around in. And while there are prettier games out on the X360, none have the level of detail (or scope) that Oblivion has.

As memorable and amazing an experience as Oblivion can be, it is, unfortunately, not for everyone. Anyone expecting a first person shooter will be wholly disappointed. Anyone not able to contend with Oblivion's RPG framework will find the game tedious. This is a game to slowly take in and enjoy. There are a million things to see and do, but only if you take the time to see and so them. The main quest can be hurried through quickly enough, but the real bulk of Oblivion lies with all the little details in between. Oblivion is not an action game, as compelling as some of its cinematic set-pieces are. Oblivion is not a turn-based affair either; everything happens in real-time, just like in life. Yes, you can fast-travel everywhere you need to (almost), but getting there is generally three-quarters of the fun. For those who know what to expect however, Oblivion is rewarding in ways that few games are; intelligent, mature and well-told.

As great as Morrowind was (and it was difficult to imagine better), Oblivion is a game that does everything ten times better. It also makes playing any other game out there seem trivial. Oblivion is not just a game, it's an experience. And where most games feature a good first level or a cool end-boss, Oblivion's strength lies in its scope and its consistency. There has never been a game created that was so detailed or so realistic and it gives me such hope in the videogame industry when I play a title made with such integrity and care. Oblivion is without question the greatest video game I have ever played or reviewed and it's also an experience unlike any I have ever had. The best part however, is knowing that Bethesda will eventually, much like Morrowind, make it even better.