The Elder Scrolls IV: Oblivion is a role playing game developed by Bethesda Softworks for the Xbox 360. The game was released on March 20, 2006.

While it is quite possible as a reviewer to write paragraphs, if not books, on the merits, improvements and details of Oblivion, it would simply be a disservice to anyone reading it. The Elder Scrolls IV: Oblivion is, simply put, the most complete and most amazing experience to be had in videogame form, bar none, and everyone should be playing it rather than reading about it. Read More. 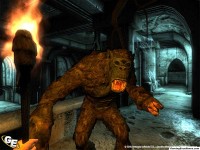