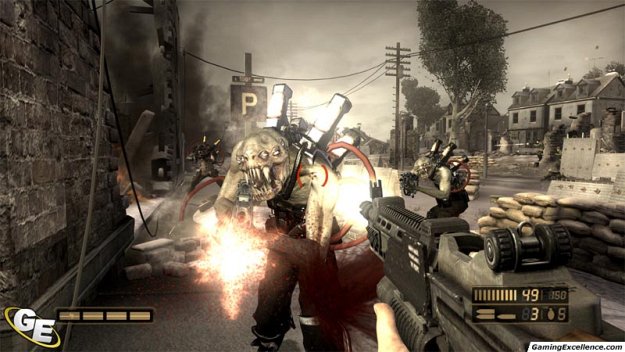 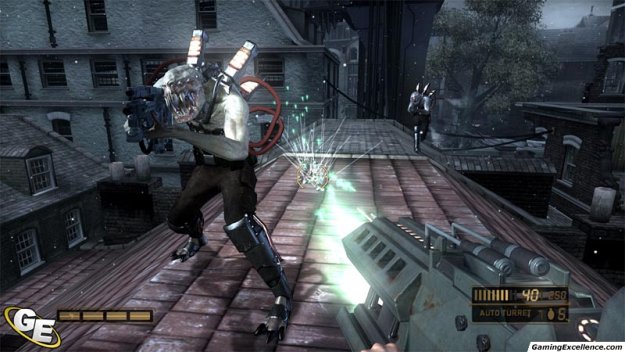 We recently had an opportunity to sit down with Resistance: Fall of Man, SCEA's launch shooter for the PS3, at the PlayStation 3 launch event in Toronto, and bring to you our zero-day impressions of the final build.

I'd heard a lot about Resistance:FoM when I first picked up the controller. The core premise of the story is that of a virus spreading out from Eastern Europe in the early 1950s, a virus that turns its victims into monstrous, alien-looking creatures. At first the game looks like your typical World War II first-person shooter. You're an American soldier fighting through destroyed cities, rubble at your feet, bodies scattered throughout. In fact, from a distance I initially mistook this one for Call of Duty 3 (until the first alien jumped our from behind the wall and fired an energy weapon that is).

The detail in the environments is impressive, and I found myself stopping to admire the various structures. There's a creepy atmosphere to the game gained by combining seemingly normal (albeit slightly bullet ridden) architecture with strange alien technology and creations. The environments looked sharp, and attention to detail blew me away, like the light mist that curled over the ground in a forested area. Some of the environments are destructible, such as blowing up a car that an enemy is crouched behind, or shooting through concrete barriers to hit the alien behind it. The physics look realistic in this regard, as well as with flying debris and bodies.

The gameplay itself is pretty good, but I find myself wondering if it sets itself apart from other shooters. The areas I walked through were quite unique in atmosphere as design, as mentioned above. There was also a wide variety of weapons as well, some similar to the ones found around the time period like the machine gun, and some different and strange, like the 'Bullseye', a gun that can fire a tracer to which other bullets will home into. Still, through all of these points, it my first impression is that it feels like a fairly standard shooter. Enemies are scripted to jump out at certain locations (though sometimes, like when a swarm of crawly-things poured down the wall of a derelict buildings, this can be pretty cool), the point of levels is to get from point A to point B, and there're increasingly challenging roadblocks to progress through. Standard stuff for the most part.

What did strike me as 'next-gen', is simply the amount of characters on screen at once. While I was playing, at any given time I had about three or four other fully-detailed soldiers following me. Additionally, there could be maybe four or five enemies (even more crawly bug-things), and there was no slowdown at all. In battles with this many fighters, the chaos and carnage really added to the gameplay.

From what we've seen, Resistance looks like a pretty interesting game. The large amount of characters onscreen at once, a co-op mode, and a new type of story makes this look like quite an experience for FPS fans. Keep a look out for our full review.