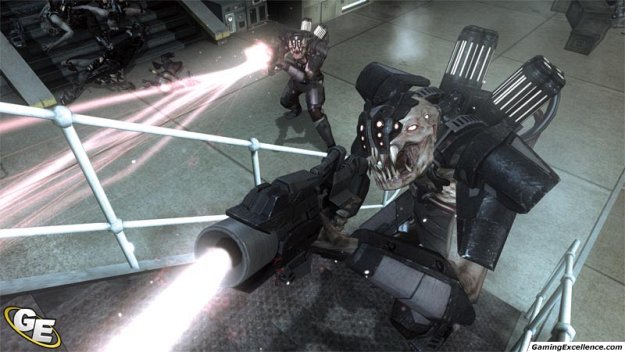 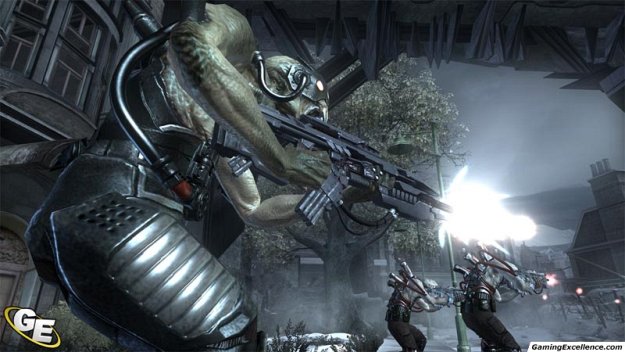 Insomniac is best known for the original Spyro the Dragon and the Ratchet and Clank series. Ratchet and Clank in particular, brings a lot of first person shooter elements and blends them with a classic platforming approach. But the real highlights of that series are the weapons that players wield during the game. The wacky functionality of the weapons is exactly what made Ratchet and Clank such a fun game to play. With the PlayStation 3 out the door, Insomniac is trying to draw upon those resources to make a more mature first person shooter and the end result is Resistance: Fall of Man. The game rises above the general conception of launch titles and is a great showcase of what the PS3 can do.

The story for Resistance revolves around the war between humanity and a new type of enemy called the Chimera. The events for the game take place right around the time of World War II and in this alternate timeline, said event never happened. Instead, the Chimera have taken advantage of the political turmoil between nations and captured most of Asia and Europe. The United Kingdom still stands as Europe's last line of defense and the United States deploys troops to stop the Chimera menace from ever reaching the West. Nathan Hale is a member of these troops, but instead of dying like the rest of his team, he actually develops a sort of immunity to the alien virus. The infection gives him special Chimeran abilities for use in combat. With the help of some local allies, Nathan must take down the Chimeran menace and take back earth for humanity. The premise is certainly interesting enough but not much is done with the story elements. Most of the plot points are told through some still images and impressive in-game cutscenes. The story isn't the best to ever grace an FPS, but it certainly gets the job done.

The Chimeran infection within Nathan gives him great abilities for combat. The first one is auto-healing which works a bit like the shield in Halo. If you avoid damage for long enough it will replenish, but there is a catch. There are four health bars on the screen and depending on how much damage you've taken, auto-healing may only replenish three, two, or even just one health bar. There are yellow containers around levels that will replenish those other bars but the trick is to avoid fire and keep the health bars for as long as you can. It all depends on the amount of damage taken at once. If the amount of damage taken goes down to the third bar, the player can only auto-heal until the third bar.

Keeping those bars is certainly a challenge with the amount of deadly enemies thrown at you throughout the game. But having a great arsenal of weapons goes a long way towards killing monsters. Almost every weapon has an interesting alternate fire mode and the weapons themselves are very useful. The original rifle for example, happens to have a grenade launcher as the alternate fire. Yet another cool weapon is the Bullseye, which has Chimeran origin and shoots energy bullets at the enemy though it lacks the same amount of accuracy of as the rifle. But the alternate fire for the Bulleye attaches a tag at the enemy. Once a tag is placed, players can shoot at the Chimera even from behind cover as the bullets will track the enemy. This is especially useful in multiplayer games and adds plenty of thrills to online. Another useful idea is to shoot the tag near an enemy path and then shoot a couple of bullets that will keep spinning around the tag. Eventually the tag explodes and deals some good damage to the enemy. There are many other weapons that can shoot through walls, ricochet off the environment, mine launchers, and even the standard weapons like sniper rifles and shotguns. Without spoiling too much of the game, the weapons really make Resistance one of the best FPS games out there, let alone the best on the PlayStation 3. These tools really add a lot of different gameplay strategies to an ailing genre that craves innovation.

With such a great amount of weapons at the player's disposal, it's only fitting that the enemies would rise to the challenge. And in Resistance, the enemy certainly aims to meet that challenge. The AI in the game is fantastic and enemies will use complicated strategies to defeat you. While in easy the game is of course "easy", normal and higher difficulties really flesh out the Chimera's ability to take down humans. They will take cover, try to rush you when in numbers, use team tactics such as throwing grenades to get the player out of cover and even send one member in for the kill while the others wait for a shooting opportunity. There are also a couple of different types of Chimera in the game, though the most plentiful are Hybrids. Even though they are present all over the game, Hybrids really display the great AI in Resistance so encounters always remain exciting. There are other Chimera that have a more human look and can jump on top of the player for the kill. These can be taken care of by shaking the PS3 controller (pretty much the only useful feature for the SIXAXIS in this game). Other enemies include giant Chimera that have lots of HP and firepower, extremely fast chimera that can stick to walls and shoot at the player, Tall Chimera that can run fast and grab the enemy by the neck, beast Chimera that walk on all fours and run after you with plenty of power, and even giant mechanical type Chimera that can shoot with turrets and destroy everything in sight. Every enemy needs to be taken down with a different strategy and the player never feels like using the same weapon all the time.

Besides the single player thrills, another huge part of the Resistance experience is the online mode, and it works fairly well. Players can choose from ranked games or custom games in online and these present a couple of options. In ranked games, the choices available include team play or free-for-all, and the amount of players on the map. Ranked games don't really give the player much of a choice in what kind of game to play. Players are usually thrown into deathmatch or conversion at random and both modes work differently. Deathmatch is a standard killing frenzy where everyone is an enemy and the action gets incredibly hectic with around 30 people in the same game. Conversion on the other hand, only hands players two lives and after those are up, the dead players must wait until the remaining combatants finish the fight. However, players change from human to Chimera once they die, and that adds a fair bit of strategy due to differences between races. Chimerans are able to see through walls and get stronger using the sprint button, but their sprint ability is limited. Humans on the other hand have unlimited sprint and a radar.

Team based matches include team deathmatch, capture the flag, meltdown and breach. Most are standard multiplayer matches except for meltdown. In this mode, players have to capture nodes around the map in order to make the team's reactor overheat. The main goal of breach on the other hand is to infiltrate and destroy the other team's reactor in a similar fashion to Meltdown. It should be mentioned that the buddy system for resistance is distinct from the PlayStation Network and that may cause problems when finding your buddies for some Resistance action. But for a free service, it still provides plenty of fun with voice quality and lag free play matching.

Resistance may not be the greatest FPS out there but it comes pretty darn close to the best. The game brings together a lot of elements from some of the best FPS games out there but still manages to keep an original experience with plenty of fun weapons. These certainly add plenty of layers to the standard FPS strategy. Resistance is arguably the best PS3 launch title available and showcases a lot of what the PS3 has to offer. For being a launch title, the quality of the game is astounding and certainly gives hope to the future of games on the PS3. Provided you obtain one of the elusive systems, Resistance should make a worthy addition to any gamer's portfolio.