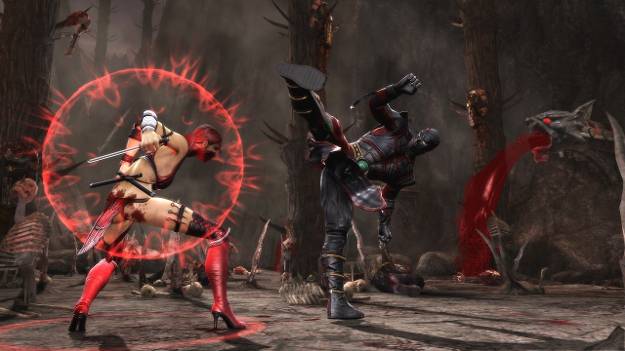 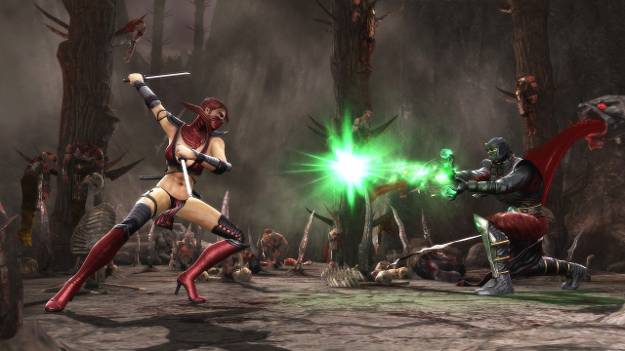 If you're like me and were born into the '80s and grew up in the '90s, there was no forbidden fruit in the world of gaming more tantalising than the gleefully gruesome Mortal Kombat series. I was never really allowed to play the game as a child, you know, with the responsible parenting thing that more gamer parents should look into, but I always found a way to get my spine ripping fix in the arcades or at a friend's house. With the new remake of the Mortal Kombat series heading back to its roots, it's safe to say that this game made my inner child weep tears of joy, as disturbing as that may sound.

Forget about the three dimensional instalments of the series from the last decade. This new Mortal Kombat is a welcome return to its two dimensional roots. This simple decision surprisingly enough allows for deeper strategy, while being welcome to newbies. This new title is simply about one on one, or two on two fighting, and all its modes branch out from this simple gameplay concept. Forget about unwelcome gameplay mechanics like alternate stances, weapons, and free running through arenas that, at least in my opinion, have poisoned the series in recent years.

The face buttons on the controller correspond to your basic attacks, with each button reflecting a limb on the characters. The R2 button blocks, R1 throws, L1 allows you to tag your partner in, and L2 is used for special moves that I'll touch upon in a bit. The game is heavily focused on combinations of hits with well timed taps of the face buttons. It's a more in depth system than the dial-a-combo moves of Mortal Kombat 3, and clearly rewards skill without having to memorize pre-determined button combinations. Special moves have also been simplified from past instalments. Simple quarter circle or back-toward motions will have you pulling off special moves with ease. A quick and well thought out tutorial makes the system easy to learn as well. Even better, all the moves are accessible by pausing the game.

As you land and block moves, you'll fill a three-tiered meter at the bottom of the screen. Using a single tier will allow you to accent special moves with extra damage and hits by hitting the R2 button as you complete the move. Using two tiers of the bar will allow you break a combo ala the Killer Instinct franchise in the mid nineties. Breaking a combo is as easy a pressing towards and R2. By using all three tiers, your fighter can unleash devastating X-ray moves that show in gruesome detail the damage you're doing inside and out. Eyes get gouged, spines and rib cages get snapped, and limbs are bent and broken the wrong way. These moves drain a huge portion of the health meter, and can easily turn the tide of a battle. They're not fully unstoppable, and can be blocked or avoided if your timing is right.

As brutal as the X-ray moves are, they pale in comparison to the over-the-top fatalities available. Characters get ripped in half, decapitated, dismembered, and blown apart in gruesome detail. In another nice touch, fatalities are no longer the incredibly difficult moves they were in past games, and even friends of mine who have never played a game in the series were able to pull them off. You can pause the game as it tells you to finish your opponent and double check the move. I can't believe I'm saying this yet again after all these years, but this Mortal Kombat is the most gruesome game I've ever played, even more so than Dead Space 2. At least here, the brutality is played for laughs as much as cringes.

With a strong and addictive fighting engine in place, it also bears mentioning that the game is positively dripping with fan service. Every character from the first three Mortal Kombat games of the '90s is present and accounted for. I had a blast playing with updated versions of my favourite characters like Scorpion, Kitana, Smoke, Sub-Zero, Johnny Cage, and Jax. Nearly all the characters are unlocked off the bat as well. PlayStation 3 owners also get a special treat in God of War's Kratos, a character who fits the brutal Mortal Kombat universe like a bloody glove. It bears mentioning that this game likes to show off the female form, and every female character wears the skimpiest of possible outfits. Little is left to the imagination and if misogyny isn't your thing, you may find yourself turned off by the scantily clad characters. I was able to get over that by the fact that female characters hold their own in battle and kick just as much ass as the men.

There are no characters to play around with by the way, but more characters are coming via DLC.

You'll be able to take these characters for test drives in a great amount of time consuming modes. There is the same ladder mode that you're used to from other fighting games, where you move up increasingly difficult opponents before facing off with bosses Shang Tsung, Goro, Kintaro, and Shao Kahn. It bears mentioning that the last two bosses can be insanely cheap, especially Shao Kahn. Kahn constantly spams unblockable long range moves that stun your character and lead into devastating combos. It's at this point where strategy and combos pretty much go out the window in favour of projectile spamming. He's not impossible to beat, but he's frustrating to play against. The ladder modes can also be played in a tag team solo or with a friend, which is a great touch.

Mortal Kombat also includes a story mode that has you playing as different characters over a five hour campaign. The story is surprisingly well told, with great voice acting and a heaping handful of hilarious camp value. The story mode essential covers the events of the first three games, and brought back fond memories of the first live action Mortal Kombat movie from 1995. There's no exploring or filler to worry about here, just pure fighting. A small bit that's annoying about the story mode is that the cutscenes are unskippable, even if you've previously watched them.

There's also a challenge tower in available with 300 quick challenges available. These start off rather easy, but quickly get very challenging. At least the game allows you to skip levels by spending Kombat Koins earned by playing any of the game's modes. Beyond standard one on one or one on two fights to survive, certain levels have specific conditions like performing a fatality, or losing your speed or damage as the fight goes on. Other challenges will have you killing 20 zombies with projectiles, or rejecting Mileena's teddy bear gift as Scorpion. Completing the challenge tower are mini-games like Test your Might, Test your Strike, Test your Luck, and Test your Sight. These mini-games are a fun reprieve from the constant fighting. Test your Strike was my favourite, which has you mashing the buttons to a certain point on a meter, striking only when the meter is sitting in a small portion of the bar.

As you collect Kombat Koins, you'll be able to spend them at the Krypt, a huge graveyard that holds the game's unlockable secrets. From here you'll find concept art, music, alternate costumes, and new fatalities. There are hundreds and hundreds of unlockables to spend your Koins on. The user interface for the Krypt isn't great, having you move from gravestone to gravestone one at a time to purchase unlockables. You also won't know what you're unlocking until you pay for it.

In both competitive and co-operative multiplayer, Mortal Kombat has you covered. Unfortunately, we were given a PlayStation 3 copy of the game and with the recent PlayStation Network outage, we were unable to test to stability of the game, but the various modes have us excited to play the game online when Sony's service sorts out its problems. Online modes include a King of the Hill mode that has up to 10 players taking turns in a "who's got next" tournament that brings me back to the days of the arcade. Inactive players can rate the match they're seeing and interact with each other in other fun ways. Up to four players can also play in tag matches online and off.

The presentation for this new Mortal Kombat is utterly top notch. The Unreal engine is used to great effect to bring the characters and stages to life. All of the stages from the first three Mortal Kombat games are accounted for, and more than a half dozen support surprising stage fatalities. The environments are loaded to the gills with details both great and small, which will bring a smile to any fan's face. The characters themselves are also rendered with TLC. Fighters will sustain visible damage in all the right areas as the match goes on, exposing muscle and sinew. The fighting moves also animate beautifully and moves flow together exquisitely. Suffice to say, this game features all the graphical fidelity and personality of its main competition, the sublime Street Fighter IV. Audio presentation is also solid, with great music and cringe inducing sounds of impact.

If you've ever liked fighting games and have a strong stomach, you simply need to check this game out. Everything that a Mortal Kombat fan has ever wanted out of the series is present and accounted for here. This title has trimmed all the fat, in the most gleefully gruesome ways possible. Fighting games simply don't come any more fun and exhilarating than this. It's a flawless victory.