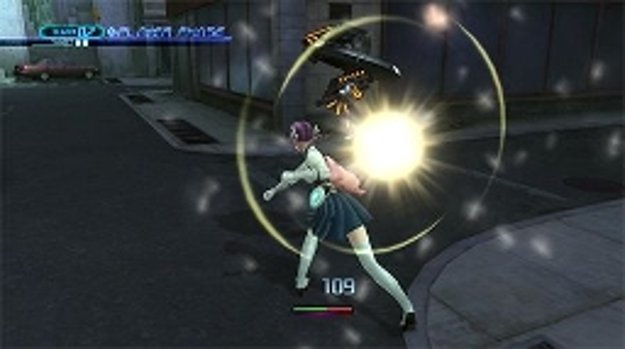 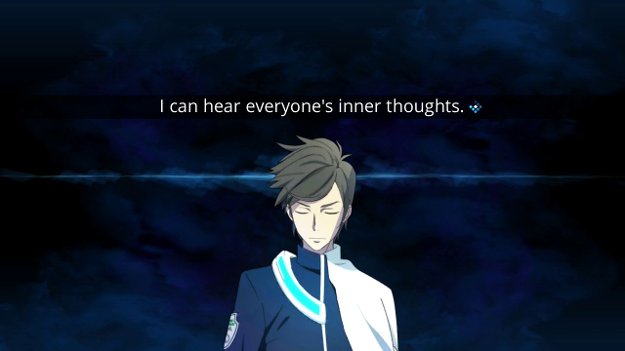 A madman bent on destroying the world; a mysterious, enormous tower erected in the middle of a city; eleven psychic soldiers tasked with saving the world - this is how Lost Dimension begins, with what is certainly an interesting premise. And it isn't long before twists are thrown into the mix, and you find yourself forced to remove those in your ranks, voting for their elimination.

Lost Dimension is a tactical RPG with a bit of an action twist: there's no top-down view of the action whenever it's someone's turn to act, nor a grid for you to make discrete steps through. Instead, the action is presented from behind the shoulder of the character you're controlling, letting them run around the arena within their movement radius, attacking enemies and activating 'gifts' - psychic abilities unique character that allow them to boost allies' abilities, shoot fire from their fingertips, teleport behind enemies for sneak attacks, and much more. This is apparent when you start to level up their abilities using gift points, as every ability tree is different for each character. 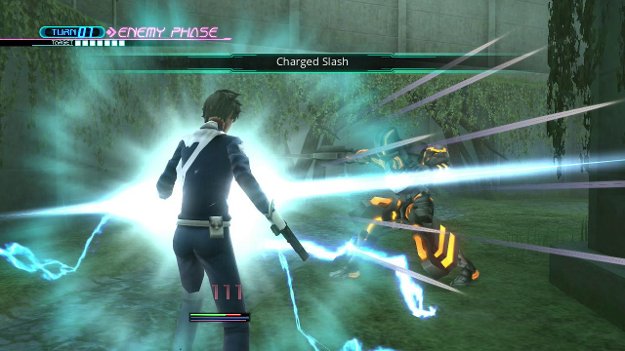 For the most part, things are pretty standard in the battles, but Lost Dimension does add a few tactical elements that will make or break your ability to take on some of the tougher battles in the game. The first is the ability to Defer, giving up a character's turn for another character who has already acted this turn. The second is the ability for characters within range of an enemy to assist on another character's attack, setting up chains of attacks that can decimate opponents. Enemies can also do this to you, however, so it's important to keep an eye out to make sure they don't surround you.

What's great about the combat is that every character you play with is unique in their talents. Sure, some of them may share weaponry, but while one character with a sub-machine gun may be able to manipulate magnetic fields, firing long-distance shots or buffing vitality of allies, the other SMG wielder can levitate, bypassing physical obstacles and moving across the arena in a matter of moments. Likewise, the two knife wields consist of a teleporting assassin and a healer-type character. Of course, this also creates problems when you realize that any of them may be the traitor in your ranks... 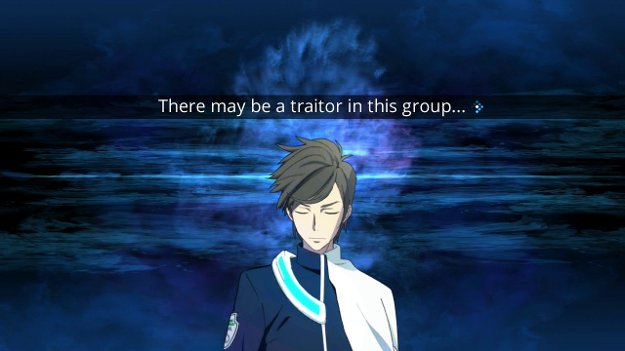 The real allure of Lost Dimension, comes in the revelation that your team has a traitor in it. A number of them, in fact: the game is divided into a number of 'floors', on each of which is a series of mandatory and optional missions to complete before moving on. Additionally, each new floor brings a new traitor for you to find. To do this, you must use the ability of the main character, Sho, which consists of a sort of mix between precognition and minor telepathy. After every battle, Sho hears the thoughts of his allies on the mission, and finds how many (but not which ones) harbor ill-will towards the mission. Using this over a series of missions can give narrow your choice down to a number of candidates, at which point you can delve deep into each of their thoughts to discern if they're truly the traitor. But these deep dives come at a cost - you can only do it a set amount of times per floor, so if you use up all your points before you find the traitor, you're in trouble.

See, the reason you want to find the traitor is because on every floor, someone is going to get 'erased'. The villain behind this whole scheme forces you to do it, in some sort of cartoony 'twirling mustache' kind of way. The key factor here is that this is a vote, not a choice, which means that even if you know who the traitor is, you need to convince everyone else in your group to vote your way. This is done through dialogue options after every mission when people will ask you of your opinion, and by raising trust between your teammates by having them fight together...which means that if your traitor is someone you've been fighting with a lot, it's going to be hard to convince others that they should be the next to be removed. 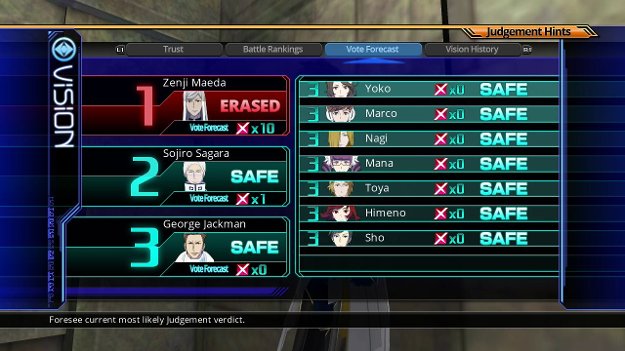 There's no looking up a guide for this, though, as every new game brings a new random selection of traitors in your group. In addition, the game is saved before you enter the so-called Judgment Room, so if voting doesn't go your way, loading your game won't help. This is interesting in theory, as every game is more or less a new challenge, but it introduces a host of problems to story and gameplay. The biggest issue is that of the inter-character relationships...which don't exist. Because any character could be eliminated at any floor, it's impossible to have any character dialogue between the other soldiers. This heavily limits all character development to that between Sho and the people he talks to to. Any other lines are simply one-offs to no one in particular, and it shows.

The other problem, though smaller, is that characters that have an important part in your battle strategy can simply disappear for good. I watched as my most powerful hitter and useful combatant (ironically, a faux-British petite woman with purple pigtails and a bunny backpack) vanished in front of my eyes. On the one hand, this means varying your strategies constantly. On the other hand, it means I had very little attachment to the character's place in combat. I didn't really care about how they leveled up or what place they'd have in combat, as they were essentially disposable. 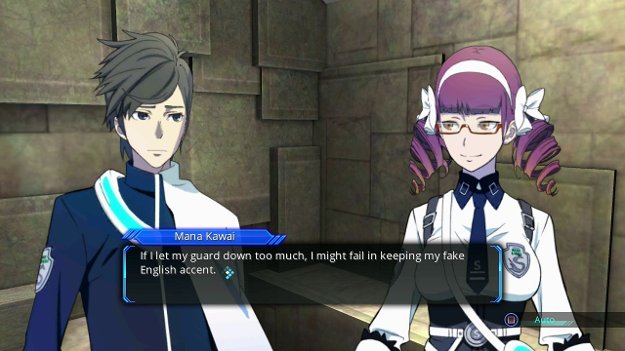 Luckily, losing a character doesn't mean losing their abilities - other characters can slot in (literally) the ability trees of perished characters...which sometimes actually unlocks new abilities to use. So if you if you lose your healer, for example, someone else can pick up his abilities and heal others when necessary. Just know that they're never going to get stronger.

As a purely strategic game, Lost Dimension isn't too bad. Unique characters, strategies borne from deferring and assisting, and a wild variety of gifts that lend credence to a number of strategic options give a pretty good game to play through. The story lacks significantly, however, despite the presence of an interesting-on-paper traitor mechanic and trust between allies, including an ending that forces a replay of the game in order to see the 'true' ending. That said, it's still a pretty interesting tactical game if approached from the right mindset, despite its flaws, and certainly worth a look if you want to check out something new.