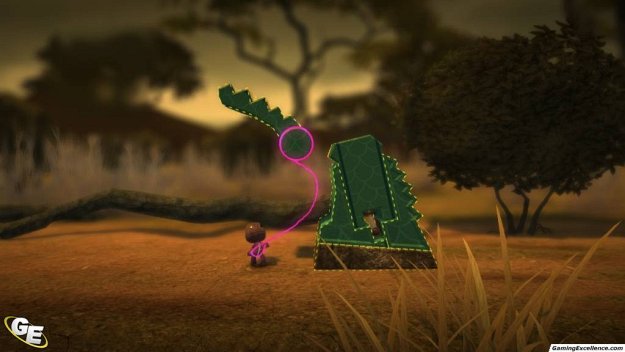 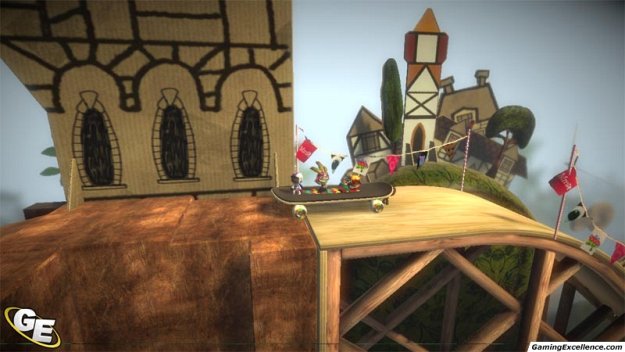 How does one go about describing a game like LittleBigPlanet? There's certainly nothing else like it in any medium. What Sony is touting as the next big thing may very well come to pass, as LittleBigPlanet gives players power over the game world unlike any wielded by a controller, DualShock or otherwise.

Ever since the days of ExciteBike on the NES, gamers have been in love with designing and playing their own custom made levels. I remember spending many an afternoon playing and designing my own scenarios using Warcraft II's powerful level editor. Even the burgeoning mod community has created entire games such as Counter-Strike and Day of Defeat.

LBP aims to take this community one step further, and placing that power in the hands of the average gamer. LBP, you see, is a game that isn't finished, and it's up to its many players to finish it. What you get on the disc is but a microcosm of the experience being offered. It's almost blasphemous to tender a preview or even a review of this game right when it comes out. If there was any justice in gaming journalism, you wouldn't see any reviews of the game for at least a year, in order to see what the community shapes it into.

In the game you play as SackBoy, a cute little androgynous avatar that you can customize any way you like. You can change their eyes, material, clothing, and even expressions on the fly. Customizing your SackBoy is just the tip of an overwhelming iceberg. By pressing the D-pad you will change your expression from angry to sad to worried. By tilting the Sixaxis you can move your head or pelvis around.

You begin by traversing a story mode, which is a flimsy, yet fully featured tutorial mode. The game is experienced from a 2D perspective, with three different planes of action. Each level introduces you to different abilities in level design, such as taking photos, placing stickers, placing objects and creating obstacles. The further you get into the story mode, the more options you are given to play with. The game introduces new abilities to you at a comfortable pace, never making you feel left behind and confused.

Gameplay is essentially not unlike a classic Mario game, but with a powerful physics engine behind it. Players will run, pull, push, and bounce their way through the levels. While placing items around your level, items float harmlessly in midair. Once you unpause the game however, everything falls to earth and reacts exactly like you would expect it to. Items placed can be made or countless different materials such as stone, wood, sponge and brick.

The physics fun doesn't end there. You can place wooden cars to roll downhill for example. You can place sails to make a ship sail. You can make platforms that collapse when stepped on. Players can set pulleys and levers and inclined planes to their heart's content. Anything in the game can be set on fire, frozen or electrified. You can even set the number of lives players have when playing the level.

All this customization is accomplished through an easy to use interface that can be brought up at any time. By pressing the square button, you access your pocket, which contains all the trinkets you've unlocked. Levels can even be edited on the fly by placing new objects and stickers almost whenever you want.

This being a community based game, LBP will live and die by its online base. You can pause the game at nearly any moment and select "play online", and the game will automatically match you up with another SackPerson who will go through your levels with you. Players can also drop in and out locally by turning on a second controller.

In between levels you will find yourself in your pod, which is kind of like a cardboard Starship Enterprise. From here you will go to your computer (read: on screen PS3 controller). From this area you can access your custom made levels, or any level made by any other LBP player. Since the creation tools given are powerful enough to replicate any developer made level, this makes the replay value of the game virtually limitless. Even in the beta phase, the servers are bursting at the seams with user created levels. It's a veritable YouTube of player created content, and it's all accessible from your hub.

The beta for the game is not without its issues however. Lag rears its ugly head quite often, sometimes rendering levels entirely unplayable as the game staggers to keep up with your controller inputs. I suppose that's why the game is still in beta. The online code will certainly be spruced up in time for release, or at least improved through patching. Let's hope it's the former. Also, the music can begin to grate after a little while.

Visually, however, LBP is a treat. The game has a very distinct visual style to it, looking something like a cross between a handmade finger puppet show and a bad acid trip... in a good way. The game runs very smoothly when on your own or with a good connection to others.

We as gamers are always being promised "the next big thing." I've anticipated, played through, and forgotten more "next big things" than I even care to remember. LBP, however, while maybe not "the next big thing", certainly has the moxie and execution to become something bigger than most. You've never experienced anything like LBP, and after numerous delays, you'll finally be able to experience it for yourself on October 21st.