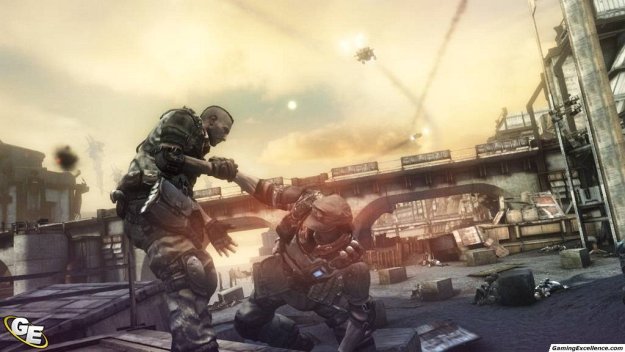 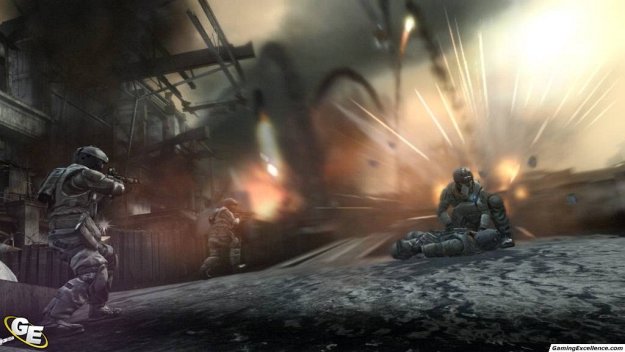 Has there ever been a game more highly hyped than Killzone 2? I don't think so. Ever since the debut of the pre-rendered trailer at E3 2005, gamers worldwide have been waiting to see if Guerilla's PS3 killer app could live up to the lofty expectations set forth by that trailer. Fortunately, Killzone 2 does live up to the crushing expectations of gamers worldwide, but not without a few significant missteps along the way.

In Killzone 2 you play as Tomas "Sev" Sevchenko. Sev is a sergeant in the ISA army, the same faction that the player represented in previous titles Killzone and Killzone Liberation on the PS2 and PSP respectively. In those titles, players played as Jan Templar, who takes a backseat this time around in an advisory capacity. After the ISA has fought off the frightening Helghast race in the previous two titles, the time has come to take the fight to the Helghast home world. What is expected to be a quick and easy invasion against a tired and weakened enemy proves to be anything but, and it's up to Sev and his squad to lead the invasion against a determined and ruthless enemy.

Unfortunately, Killzone 2 is saddled with underwhelming storytelling that betrays the exciting gameplay. Cutscenes are sloppily edited, and levels could rearranged in any order to little detriment to the overall storyline. At least the story is partially redeemed by a powerful and effective ending that sets up a sequel in an effective "Empire Strikes Back" kind of way.

Killzone 2 plays like essentially any other first person shooter you might have previously played, especially the Call of Duty series. Killzone 2 requires you to make judicial use of cover, while popping out to place some well placed shots at your enemies. Spend too much time out in the open and you'll get shredded faster than a block of cheese onto a nacho platter. Killzone 2 utilizes a very strong cover system that allows you to cling to cover, but without jarringly removing you from the first person perspetive. By holding the L2 button down, the game will "stick" Sev to cover, which is indicated by the weapon model being raised. Popping out of cover is as simple as pressing the fire button or moving the d-pad in the desired direction. It's a simple, yet elegant system that works superbly.

Enemy AI will also push your shooting skills to the limit, especially on the harder difficulty settings. All the Helghast have impeccable aim, and will convincingly flank and take cover just like you will. Supportive AI is also impressive. Your teammates will rarely get in your way, and will kill their fair share of Helghast too. Even better, the Helghast will not solely focus on you, but give your AI equal attention too. Good work was done on the AI, and is just one more element that the developers polished to a mirror sheen.

Level design is solid, but can be fairly underwhelming. The game rarely gives you any sort of non-linear option, and you'll feel led along to one action set piece to the next. The game stays fun throughout, but it still left an unsettling feeling to be given zero freedom in what to do. Variety also becomes an issue as the game is essentially the same rinse, lather, repeat action of run to area, take cover, take out all Helghast, and then move on. There are two moments in the game where you'll drive a tank, shoot down Helghast fighters out of the sky, or pilot a destructive exoskeleton, but a few more moments like these would have gone a long way to curb the minor tedium that sets in during a stretches of the game.

In addition to the sweet exoskeleton, you'll wield an impressive arsenal in Killzone 2. Among the requisite assault rifles, sniper rifles, pistols and shotguns, you'll also get some unique weapons like a flame thrower, and an electricity gun that reloads by taking static electricity out of the air. Unlike most shooters, Killzone 2 requires you to pick a handgun and a main gun, and that's all. Pistols get unlimited ammo, but only having access to one rifle at a time adds a layer of strategy that you may or may not appreciate. Personally, I didn't mind.

Multiplayer offerings in Killzone 2 will ensure an active online community on the PlayStation Network for a long time. Like the Battlefield series, players can choose from one of seven classes to go online, and mix and match elements of different ones for a customized experience. Classes can be switched after deaths. Like the Call of Duty series, players will gain experience through kills and accomplishing objectives which can be used to unlock new weapons and skills.

There are a smattering of modes, to play, including Assassination, Search and Retrieve, Search and Destory, Bodycount, and Capture and Hold. Killzone 2's twist is that matches are played dynamically, switching gametypes on the fly in a single round. Online matches support up to 32 players and bots. There are eight maps available on the disc, with more planned with downloadable content.

With all the effort that went into the multiplayer modes, it's a real shame that there is no option for co-op play, online or off. It's a tragic oversight that would have added a lot to the campaign.

Despite the significant strengths and occasional weaknesses of the game's overall design, there is no denying that Killzone 2's amazing presentation. I've rarely said this as a game reviewer to avoid dating myself, but it applies here. Killzone 2 is the most beautiful shooter ever made. The level or detail is staggering, from the sweeping vistas to the crumbling rubble of the battlefields, Killzone 2's world feels fully organic, with no corner left undetailed. Character animation is a marvel to behold, with characters reacting realistically to every shot that perforates their bodies, and facial animations that suggest true emotion. Special mention must go to the phenomenal looking weapon models that look outright real, even during reloading animations. The game also runs as smooth as melted butter.

The sound design is just as great as the graphics. Killzone 2 will make excellent use of your surround sound system. The game defaults to DTS surround sound, and supports up to 7.1 channels of surround. By the time the credits roll on the campaign, your subwoofer will be begging for mercy, not to mention the neighbours. Directional sound effects will assault your ears from all angles, placing you right in the middle of the acoustic battlefield. Voice acting is also very solid throughout the game, which kind of feels like a waste considering the lacklustre script and storytelling.

So is Killzone 2 the vaunted killer app that PlayStation fans have been desperately craving? Mostly. It's certainly a step in the right direction that was started with Resistance: Fall of Man. It's not the best shooter ever made, but it comes very close to living up to the unfair levels of hype heaped upon it over the years. With a solid campaign, addictive multiplayer, and some of the greatest presentation ever seen in a video game, Killzone 2 is well worth your time and money. Just don't expect any sort of meaningful revolution of well established shooter conventions.