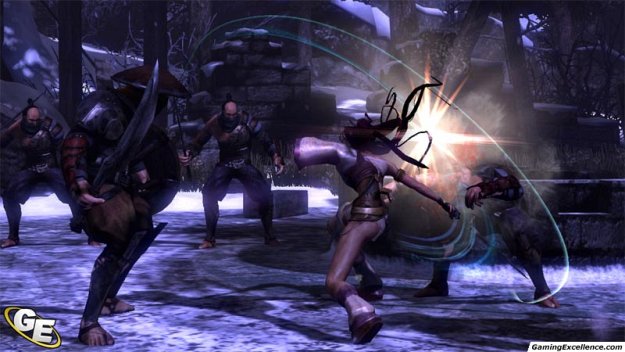 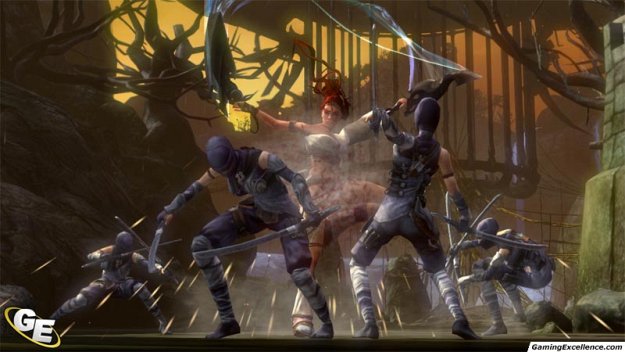 I remember seeing a trailer for an Xbox exclusive game a few years ago. Microsoft was touting the game as an action title that would feature production values right out of Asian martial arts cinema with deep and engaging action gameplay. Then the game disappeared from the release radar. Next thing you know, Microsoft was out of the picture, and Sony was touting the game for the same reasons for its new PS3 hardware. That game was Heavenly Sword. Usually when a title switches consoles mid-development it suffers numerous delays, and the end result is something less than satisfactory. Thankfully, this is not the case with Heavenly Sword, a must-have exclusive title for a system that is sorely lacking in them.

In HS, you play as Nariko, a fiery red-headed child of destiny. Nariko is the daughter of the chief of a clan that is tasked with protecting a mystical sword from the forces of evil. Of course, the forces of evil come knocking, or we wouldn't have much of a game. These massive forces are led by the diabolical King Bohan, a vicious despot who is willing to massacre entire lands in order to add another trinket to his pile. Therefore, it is up to Nariko and her cheeky, cat-like sidekick Kai to take the Heavenly Sword in hand and repel Bohan's forces. There's a catch though; whoever wields the Heavenly Sword is doomed to die a horrible death.

In order to defend the Heavenly Sword, Nariko must take on all comers in massive battles against dozens of foes at a time. The game plays sort of like God of War, but with a few fundamental differences. HS uses two attack buttons: square is your offensive attack and triangle is your counter and weaker attack button. Nariko also has three stances that she can attack in: speedy, normal, and power. Your enemies will also be using these stances, giving the entire game a very rock-paper-scissors feel. You have to be in the correct stance to counter or block enemy attacks.

Since the Heavenly Sword can morph into various forms, each stance essentially means you're using different weapons. Speedy stance attaches your blades to a pair of chains that you whip around like a Spartan from that other well known Sony action franchise. Normal turns the sword into twin daggers; and power stance puts the whole weight of the sword into its full glory. I found speedy stance to be mostly useless because it does so little damage. You'll definitely rely on the other two stances more.

As you accumulate combos and kills without getting hit, you'll fill a meter at the bottom of the screen that will give you access to assorted instant kill moves that are executed by pushing the circle button. Using these stances while executing these moves results in dozens of different animations, so you won't be seeing the same ones over and over.

Sometimes, Nariko's situation will call for the use of a rocket launcher or throwing objects. In these cases, you can hold down the square button to slow down time and guide your flying projectile to its desired destination. This is where most of the puzzles in the game come into play, as you must sometimes ricochet a flying item to a gong which will then open up a path for you. The objects are steered with either the left analog stick, or the Sixaxis controls. The Sixaxis controls are better implemented than most PS3 games, but they're still not great. Steering with the controller simply isn't as precise or intuitive as the analog stick. It's a shame, because I really want to play a game that really takes advantage of the potential for the Sixaxis, and that search continues. Throwable items include swords, metal discs and corpses. At the worst case scenario, it's always fun to pick up a dead body and steer him towards a group of enemies with the Sixaxis.

You'll also play a few sections as Kai, which simply aren't as fun as Nariko's sections. Kai doesn't have the skills that kills that Nariko possesses, and must rely on her cross bow to take out her enemies from a distance. While it's nice to break of the monotony of smashing through armies single-handedly, I found Kai's sections to be more frustrating and generally, less fun. When the enemies start getting close, you might as well restart your game, because Kai will get wrecked faster than a Lamborghini in a blizzard.

You'll also have to contend with several timed sequences much like those found in God of War or Resident Evil 4. The timing for these sections is incredibly tight, and will usually take you a couple of tries before you successfully complete them. At least the corresponding on-screen action is always thrilling and exciting.

Special mention should be made to the bosses, which are both quirky and well designed. Each boss battle is very different than the one before it, and will take both brains and brawn to overcome.

Unfortunately, Heavenly Sword is really short. You can easily complete the game in a five-hour afternoon, and there isn't a whole lot to do once you get past the ending. You can watch the myriad of special features that are unlocked throughout the game's length, and replay the game on hell mode, and that's about it. It's a tough pill to swallow when you spend full price on a game that can be beaten in the time it takes to watch two movies.

Load times in the game are a bit of a concern too. Every time you boot the game up, you'll have to sit through three separate thirty second loads. If you happen to die at a section that starts with a cinematic, you'll have to sit through another thirty second load only to be forced to watch the same cutscene again. Conversely, if you die with no cutscene, the game loads immediately. It's definitely a weird little quirk that shouldn't have made it into the final game.

Speaking of movies, Heavenly Sword is definitely one of the most cinematic games I've ever played, and it all starts with the stunning graphics on display. The motion capture work is absolutely amazing, featuring work by motion capture maestro Andy Serkis, he of Lord of the Rings (Gollum) and King Kong fame. As Nariko goes through slashing her way through the armies, the animations flow seamlessly from one to the next. Even when switching stances on the fly, Nariko moves with a grace and elegance only seen in the best CGI movies. The graphics also feature phenomenal facial animation, and nary a frame rate hitch, even with hundreds of enemies on the screen. The frame rate occasionally stutters a bit during cutscenes, but gameplay is always buttery smooth.

On the audio front, Heavenly Sword is helped by an extremely talented and professional cast of voice actors. Each character is distinctly voiced, and this lends a lot of credence to the powerful story in the game. King Bohan is particular stands out as a deep, frightening, and even funny villain thanks to Serkis' great voice work. In addition to the outstanding voice acting, HS also features a pulse-pounding orchestral score and outstanding sound effects that transplant you right into the middle of a battlefield.

Heavenly Sword has everything that you'd expect out of a great summer blockbuster; great action and graphical effects, an afternoon of entertainment, and an interesting story that wraps up in an ending so ludicrously epic that Michael Bay only wishes he thought it up. All in all, the game is great fun from intriguing opening to thrilling end; it's just a shame that the game is so short. Still, if you're looking for a superb action game, you could do a lot worse than Heavenly Sword.