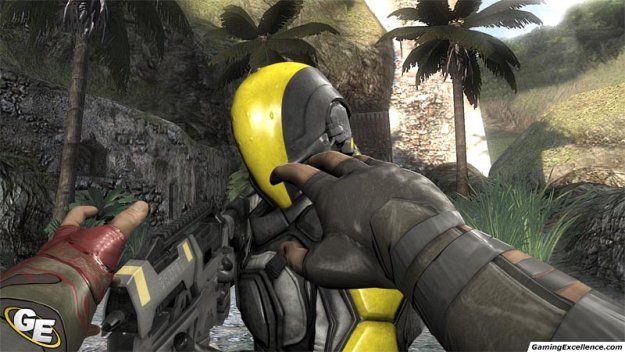 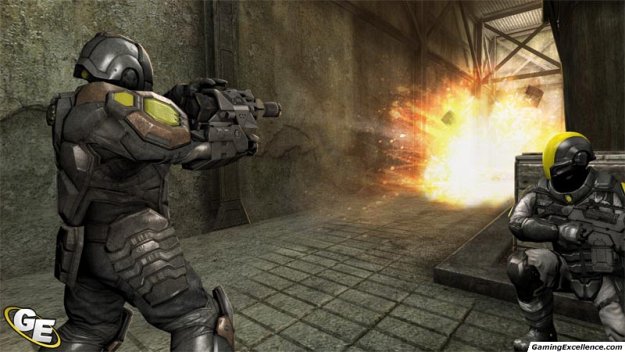 When it was announced that Free Radical was creating a next generation first person shooter, interest was understandably piqued. After all, they've developed the well-received Timesplitters series, and many of their top brass put console first person shooting on the map when working for Rare on GoldenEye 007 and Perfect Dark in the late 1990's. Unfortunately, despite this rich pedigree, Haze proves disappointing thanks to a myriad of glitches and poor design choices.

In Haze, you'll play as Shane Carpenter, a foot solider for the Mantel Corporation, a few years into the future. These yellow and black clad soldiers have invaded a nameless Spanish speaking nation and gone to war with the locals, a rebel group that goes by the name of the Promised Hand. For the first few levels, you'll have access to a drug named Nectar, the Mantel Corporations secret weapon against the rebels. By injecting Nectar into your bloodstream, you'll move faster, aim more steadily, and visually highlight your enemies, making them easier to pick off amidst the dense jungle foliage. Nectar also has some other, less desirable side effects such as censoring dead bodies from view and causing fits of insanity. Take too much Nectar and your character will completely freak out, unable to control his trigger finger and discern friend from foe.

The storyline proves interesting, as Carpenter switches sides from Mantel to the Promised Hand after the first few hours of play. As a rebel, Carpenter gains a whole new set of abilities, such as synthesising ammo, stealing weapons from your enemies' hands, and playing dead.

Once the sides change, the player is tasked with finding out why the Corporation has invaded this country and discover their ulterior motives. The storyline deals with fascinating themes such as morality on the battlefield, sympathy, fear, the future of war and drug addiction. It's a shame that such an interesting storyline is betrayed by mediocre voice acting and one dimensional caricatures. The themes are great, the writing, not as much. Mantel soldiers are all gruff, 80's action movie caricatures, and anyone is the Promised Hand is portrayed as saintly, removing a lot of depth and impact from the storyline.

Despite the disappointing treatment of the story, Haze proves to be a pretty fun romp despite a few problems. Haze controls like any other first person shooter, and level design for the most part is fun and filled with several astonishing action set-pieces. My favourite involved going through a demolished tourist resort while avoiding a hostile drop ship.
The shooting mechanics certainly feel polished, and aiming and motion is a total snap. The game is pretty linear, and your next objective is always highlighted by a compass.
Unfortunately, getting to your next objective can take a while, thanks to some long load times. This includes a thirty second load every time you die or start a new level.

The arsenal in the game is merely average, with each side sporting their own versions of the requisite shotguns, assault rifles, sniper rifles, and pistols. There's also a flame thrower available, but good luck not setting yourself on fire while you use it. Also, the only use of Sixaxis controls comes into play to extinguish fires on your person by shaking the controller.

You'll also come across a variety of vehicles in the game, which are not as fun to mess around with as you'd think. The handling on any vehicle feels very stiff, with far too effective breaking and unconvincing physics. Any section that involves a vehicle is also usually a straight line, with little room to explore. It's also upsetting that your AI compatriots don't know how to drive. We had AI drivers in far more open levels in the last generation with Halo 2. How come we can't have it in a new-gen exclusive?

Actually, in general the AI presents a very disconcerting level of stupidity, on both sides of your gun. Your allies will commonly find themselves walking right in front of your crosshairs, yet never seem to be able to hit anything. It's also annoying to have to revive them on a fairly consistent basis by simply tapping them on the shoulder and telling them they're OK. Your enemies are also dumb as bricks, not noticing when their buddy two feet away has had his head blown off, and shooting at walls like psychotics. These AI problems aren't present all the time, but it takes you out of the moment significantly when they do happen.

As a PlayStation 3 exclusive, you'd expect Haze to feature some spectacular graphics, but that's unfortunately not what you'll get. Haze is a very mixed bag in the visual department. Some scenes will floor you with their complex jungle geometry, good looking water, and solid character animations. At the same time, you'll see loads of flickering shadows, awful looking fire effects, and far too many low res textures that refuse to snap into their high res counterparts. Haze's visuals are average and glitchy at best, and are not pushing the PlayStation 3 in any meaningful way.

Audio is also disappointing. While the voice acting in some of the cutscenes is convincing enough, the rest of game's voice acting is nails on a chalkboard, dentist-drill-to-your-skull kind of awful. Soldiers on both sides will incessantly yell out cardboard phrases constantly, and repeat the same ones over, and over, and over, and over again. Just when you think you've heard "Remember your promise to Merido!" for the last time, some other schmuck will yell it out in the exact same monotone voice a mere ten seconds later. At least hearing "all your base are belong to us, Cheesedick," was good for a laugh. The weapons and soundtrack are both solid, but the acoustically offensive voice acting and constant repetition ruin any positives the audio in Haze may present. My surround sound system was begging me for mercy by the end.

Is Haze a bad game? Absolutely not, but it is a disappointing one. Despite some early promise and hype, Haze has a lot of trouble living up to those high expectations set forth by its developers' past triumphs. Despite its problems, there is a solid game at its core, but you'll have to do some serious digging to find it. Still, if you're a PS3 owner who has already conquered superior FPS alternatives such as Call of Duty 4, Resistance, and the Orange Box, there's some fun to be had here with a weekend rental.