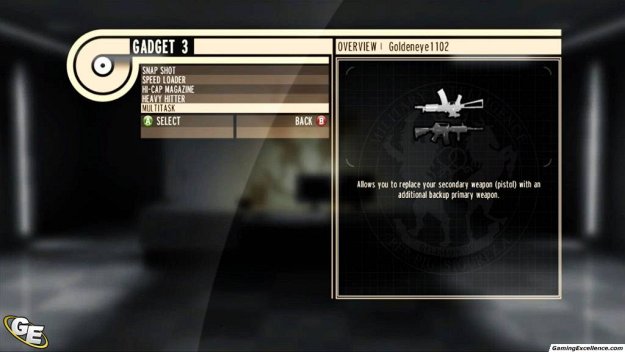 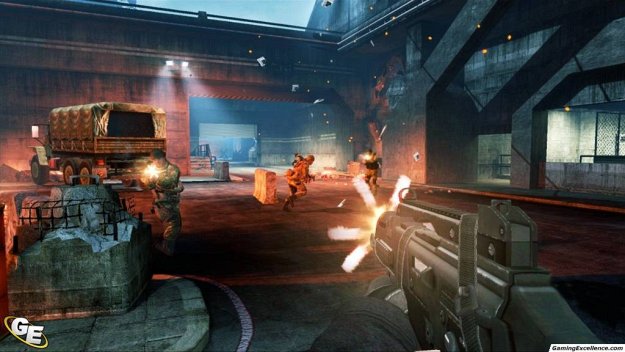 Once upon a time, when I was knee high to a grasshopper, Nintendo brought out a Rare developed shooter that took the console world by storm. Sure, first person shooters were nothing new in a world that already featured the likes of Doom and Duke Nukem, but GoldenEye 007 brought solid control and addictive multiplayer the likes of which consoles had never seen. Since the game has aged rather poorly in the intervening 13 years, the time is ripe for a remake of sorts. Fortunately, Activision and Eurocom have taken everything that was great in the original game, while allowing it to retain an identity all of its own, which is now available with a snazzy HD update from last year's fantastic Wii shooter.

In tackling the remake, the developers have gone the extra mile by updating the GoldenEye story to feature current Hollywood Bond Daniel Craig. The story is told with more grit than even the original GoldenEye film, and I'll take Craig's Bond over Pierce Brosnan's any day. The story and action beats remain largely the same with similar action set pieces and standard James Bond plotline.

Gameplay actually takes more cues from Call of Duty than the original game, which is to be expected considering Activision owns the rights to both series. The game is played entirely through a first person view, and features loads of thrilling scripted action sequences and the patented Call of Duty shooting galleries. Generally you'll spend about 70 per cent of your time shooting enemies, and another 30 being sneaky and exploring the levels for objectives. In a nice touch, the harder difficulties have you completing more objectives. The objectives are generally easy to find with a little exploration, and usually involve you hacking computers with your smartphone or finding intelligence. These sections do a good job of reinforcing the fact that Bond is a spy, and not just some Rambo wannabe mowing down his enemies. The smartphone is generally the only gadget you'll use, but its ease of use and flexibility means more time spent in action than fiddling with pointless minigames. During the game you'll be able to carry two guns of your choice, plus Bond's trusty Walther P99 silenced pistol. The game features the standard array of machine guns, shotguns, and sniper rifles.

The gunplay is intense and satisfying, and the game gives you a slew of options for controlling the game, including the Playstation Move on the PS3. You can obviously use the classic dual analog controller on the console of your choice as well. The analog sticks on the controllers simply can't match the accuracy and quick aiming of the pointer on the move controller, and playing the game this way provides a fresh control scheme that never gets old. In a nice touch, Eurocom included a ton of OCD type control options for sensitivity and pointer dead zones which allow you to configure the controls just to your liking.

A very well implemented cover system completes the satisfying shooting package. When you aim down your sights, Bond will instantly poke his head over cover, and with a turn of the nunchuk, Bond can also peek around corners for a better shot or to scan his surroundings.

The stealth portions are also nicely implemented. Generally, most rooms in the game allow you to stealthily find your way through without relying on gunplay. Being stealthy requires a fair bit of patience and skill, but is essential for getting through the harder difficulty levels. A variety of takedown animations ensure that the stealth remains just as fresh as a well placed headshot. The fantastic AI may seem a little too aware of their surroundings at times, but rarely does failure feel like poor design over a mistake you've made yourself.

I'd be remiss if I didn't mention the action set pieces that pepper the experience, including an awesome tank level that has you shooting down helicopters and causing massive property damage. All your favourite scenes and set pieces from both the movie and the N64 game are well accounted for here, and its fun to see them from a redone perspective. A smattering of quick time events punctuate some of the action scenes, but their inclusion is not over done like in other shooters. For the sadistic nostalgics amongst you, there is a 007 Classic mode that does away with regenerating health, and has you picking up armour pick ups. There are also time trials to run through, but the unskippable cutscenes cut into the enjoyment of timed runs, and in retrying difficult sections for that matter.

While the Wii version was a multiplayer masterpiece thanks partially to a dearth of options on that console, GoldenEye Reloaded is up against much stiffer competition on the Xbox 360 and PS3, and it can't quite keep up with the heavy hitters. There are a slew of connection problems happening lately near the game's launch, and servers aren't all that crowded. In another lousy touch, the split screen doesn't support the PS Move controls, forcing you to play with the dual shock controls. Much like Call of Duty, GoldenEye uses a perks system that grants you experience as you play the game. Killing players ranked higher than you, getting several kills in a row, or good old fashioned headshots will grant you extra experience, which can then be used to unlock new guns, gadgets, and even new gameplay modes.

You'll also have access to the Mi-6 Ops, a bunch of very challenging levels with objectives like wave defence, stealth, and finding objectives. They're fun, but incredibly challenging. What's fun is that the game gives you a slew of modifiers to mess around with, such as character health, paintball mode, no damage below the neck, and others. When you're done, you can upload your modifiers online and challenge other people to beat your times.

The only caveat to the split screen is that the frame suffers quite a bit during the more hectic moments, but it's not even close to a deal breaker. The levels from the N64 version don't make an appearance, but in their place are some very well designed levels that feature equal parts open space and narrow corridors.

Last year, GoldenEye was one of those games that looked great "for a Wii game," but the old standby applies here. By Wii standards, GoldenEye is a stunner, but the HD remake is not without its problems. It definitely looks sharper and runs better than the Wii version, especially with the fantastic weather effects, destructible cover, expessive faces, fluid animation, and well detailed textures making the shift over. On the negative side, jagged edges are everywhere and bodies will still fade out of existence two seconds after their death. The graphical presentation is as good as we could ask out of the meagre Wii hardware, but against the stiffer competition of the HD consoles, GoldenEye only looks average at best.

Acoustically, GoldenEye is also a winner. Daniel Craig is here as Bond, and Judi Dench makes an appearance as M. In general, the voice acting is very good, although a few secondary performances are phoned in. The familiar Bond theme and accompanying orchestral score are also fantastic. Finally, the guns sound great, and bullets make a satisfying sound as they make contact with flesh.

If you missed out on GoldenEye for the Wii last year, there's no better time to experience this wonderful remake of a remake. Regardless of the platform you play it on, this really is a fantastic shooting experience that lives up to the legacy of one of the titans of gaming history.