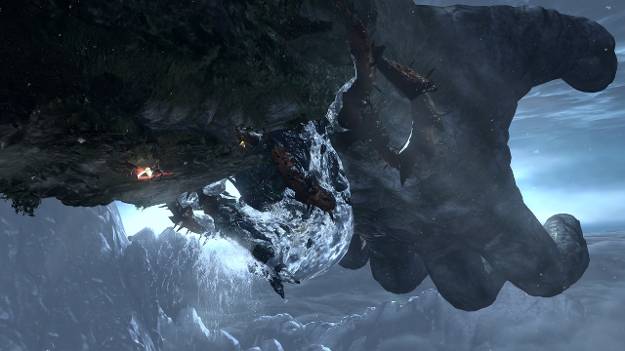 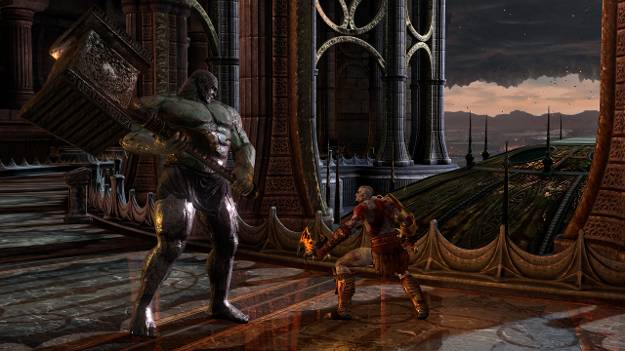 It's no secret that I'm a diehard God of War fangirl. You know those sports fans who paint their faces in their team colors? Well I… well, you can see the picture.

My PSP is the God of War version. I have a Kratos action figure sitting near my gaming PC (Now freshly signed by John Palamarchuk, Lead Cinematic Designer on God of War III, who was at the event.)

Full disclosure satisfied? I hope so.

Because I'm also very tough on games, even ones I like. I'm aware that despite great characters, concepts and storytelling, God of War I and II had their flaws. The graphics tended to tear. Some moves were frustratingly tricky to do. And no matter how great the backgrounds looked, they still looked like backgrounds, with the action taking place inside elaborate but clearly demarcated tunnels.

The demo that was available at E3 and PAX was familiar ground: bloodier, shinier, but essentially the same stuff, with a battering ram move added, some new monsters, and the quick time event prompts moved to the sides of the screen.

I, frankly, would have been satisfied with that. The third game in a trilogy tends to be the weakest in terms of gameplay innovation, as companies try to milk a sacred money cow with as little development as possible.

God of War III, however, is expected to carry the PS3 on its back like Atlas held up the world. It doesn't just have to justify its $60 price tag. It has to sell a $300 game system. It has have all the action and excitement of six games. It has to get PS2 owners who have been procrastinating on the upgrade to finally take the plunge to the PS3.

Well… drum roll please… Based on what I saw at Playstation's advance media preview, it just might have a fighting chance.

We sat down to play the beginning of the finished game, surrounded by human statue performance artists, an open bar with special blood themed Kratos drinks, and finger foods. In this environment, we discovered this: the opening twenty minutes of God of War III are a whirlwind of balletic violence that puts Peter Jackson, John Woo, and Michael Bay in a blender, whips them back to Ancient Greece, then makes them all cry.

The room was abuzz with reviewers praising this intensity. It was twenty solid minutes of adrenaline, with the briefest of refreshers on the controls before Kratos is flung into a lengthy, grueling boss fight against a creation of Poseidon's that looks like a giant horse made out of water with the legs of an Alaskan King Crab. Kratos is beating up water and still makes it awesome.

While God of War II flaunted some impressive level designs, it didn't come close to the ingenious, kinetic terrains on display in its successor. Continuing where the last game left off, the fight with the horse/crab/water monster takes place on, around, and even inside the Titans scaling Mount Olympus. Twice I caught myself taking needless damage because I was mesmerized by the attention to visual detail, watching the game instead of playing it.

Others had the opposite complaint: the pace of gameplay is so fast that they couldn't take in all the graphical achievements. For they do not relate to Kratos like I do, so they do not understand that it's okay to let the game own your ass if something's real pretty. Kratos hurts the ones he loves.

Okay, in all seriousness, those present who hadn't played the first two games struggled even on casual difficulty. This is one of two caveats I have in my uncharacteristically glowing recommendation:

1 - It's very much for people who have played the first two games in the series. Trying to come into the story this late in the game is impossible, never mind the learning curve on the controls. Kratos starts with a heavy compliment of abilities from the end of the last game, and it's easy to miss an instruction or two: they come in a clumpy barrage while dozens of skeleton warriors are trying to kill you.

2 - This is an M-Rated game in every way possible. I'm normally extremely permissive when it comes to parents making decisions for their kids based on the kid, but this third installment rockets past the first two in terms of the visceral quality of the violence. Without the emotional maturity to contextualize Kratos' viciousness, both historically, and within his ongoing story, teenagers might be unduly encouraged to start gouging out random eyes. If your kid begs and pleads and you end up caving, watch the first hour as they play. If you decide it's too violent, you'll probably get a decent amount as a trade in, so it won't be a total loss.

Caveats emptied - har har -- this first taste of the finished product is certainly sustaining the hype of the demo. So take heart, all ye who have preordered, come March 16th, all 40 gigs of game data will be blaring at you on the screen in what is truly an epic myth on steroids. According to Palamarchuk, the SCEA development team was adamant that the title not be just God of War 2.5. No worries there: its opening moments deliver more thrills, winces, gasps and laughs of disbelief than some entire games.

And this has been too much positivity for me. I need to go lie down.