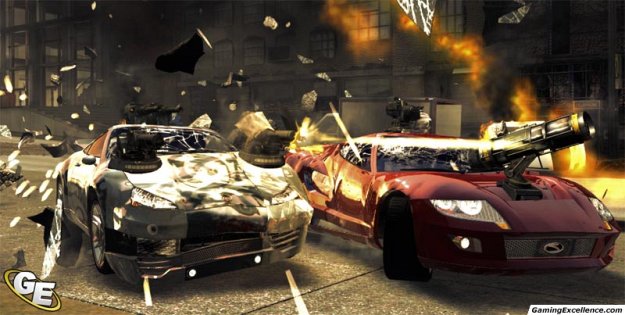 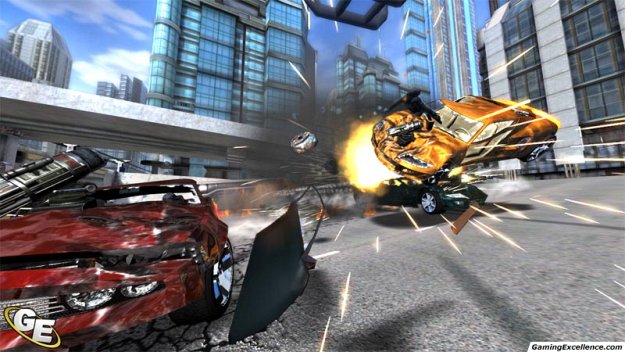 Released a few months after the launch of the Xbox 360, Full Auto is the kind of game you can step into for a quick battle with friends, or step online for some destructible racing. And while it had some flaws that detracted from the overall experience (much of the single player mode), Toronto based Pseudo Interactive has taken a lot of the feedback in stride. We recently had an opportunity to step behind the wheel of Full Auto 2: Battlelines, an exclusive for the PlayStation 3 and from what we've seen - this one takes the Full Auto franchise to all new levels.

Looking at the franchise at a distance, I'm instantly reminded of the 1997 release Interstate 76' on the PC. A now defunct franchise, it was one of the first games allowing you to strap weapons onto your souped up ride, take it out for a spin, and blow the heck out of anyone that came near you. And while it's been a long time since the days of Interstate 76', the gameplay itself seems to carry a similar feel, with a lot more arcade oriented action and less story.

It's where Full Auto fell short that Pseudo has concentrated their efforts. The levels themselves have been created in such a manner to make the game drastically more playable, and I didn't notice nearly as many graphical slowdowns as in the original during my time with the game. In addition, the ability to customize your vehicle with the weapons of your choice was a feature sorely missing from the first (you only had choice of vehicles and pre-defined weapon packs). This time around, your weapons are limited only by the capacity of the vehicle you select, you can select individual front and rear weapons independently, a nice improvement.

Another key area that's been improved is simply the overall feel behind the wheel. This is an arcade racing shooter all the way, but in the original it just fell flat around the edges. This time around, it's evident that Pseudo has taken the time to focus on making the game more playable, and the sheer entertainment factor of the multiplayer is one of the strengths of Full Auto 2.

Graphically, Full Auto 2 really utilizes the power of the PlayStation 3. Environmental damage has been much improved, and is significantly more interactive then the first. For example, you can collapse some structures by blowing up its supports and foundation, crushing any cars unlucky enough to get caught underneath. These types of effects not only sound great on paper, they look fantastic on screen as well. The detail on each of the models (cars, structures, and other objects) has been vastly improved, and from what I've seen it just looks and feels a lot more polished then the original.

While we didn't get a chance to experience the other modes, Full Auto 2 will launch with a new campaign mode, and five multiplayer modes (online up to eight players, or two player split-screen). In addition, the offline portion of the game will offer up an arcade mode allowing you to quickly strap in behind the wheel and play in one of three modes, race, gladiator, and team gladiator.

What made the Twisted Metal franchise so successful was the whole package, memorable levels, and gameplay that was simply a heck of a lot of fun, especially in its multiplayer. The original Full Auto didn't quite offer up this full package, falling short in a few key areas, and it's nice to see the developers address these issues in the sequel with plenty of gameplay tweaks designed to make the game more playable and increase the fun factor exponentially. Full Auto 2 is one of the premiere exclusives for the PlayStation 3, and for those fortunate enough to get your hands on a console in the launch window, it's one to keep an eye out for.