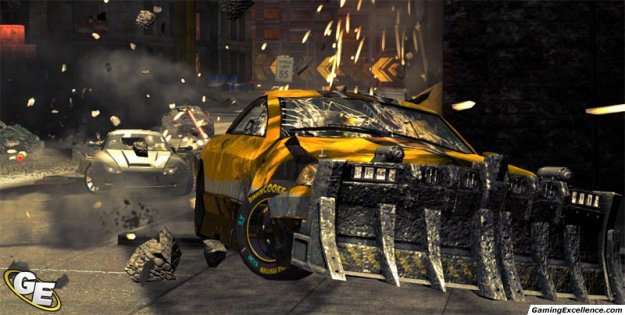 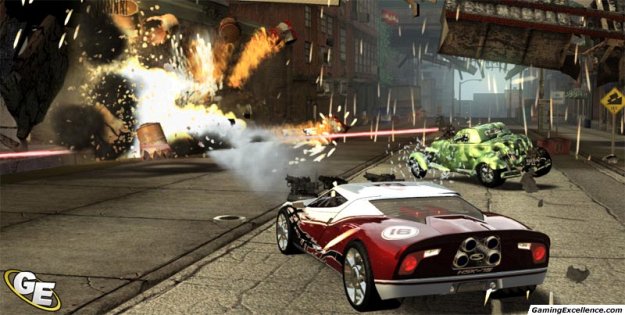 The most fulfilling sight to see in a video game is something plain old getting wrecked. Most gamers love to kick the bologna out of another vehicle, making it explode into a billion pieces. Just like Oscar Mayer Weiner, everyone's in love with eye-drying speed too. I'm proud to report that Battlelines will satisfy both of those cravings, but don't count on any condiments.

Full Auto has pinned itself as a big competitor in the "death racer" genre against series such as Burnout, ranging back to Twisted Metal and many others. Releasing the first to the series less than a year ago on the 360, Full Auto offered up a mix of super high-speed racing and destruction. Suffering from a few performance issues, and being somewhat un-original, brought the game's scores down across the board. Full Auto lacked a battle mode where players could simply tear each other a new one in head to head combat. But the biggest issue was in fact its unoriginality, failing to bring something new to the table. So while it definitely entertained, Full Auto as a series still had quite some room to grow.

To make it clear as day, Full Auto 2: Full Auto 2 did not grow all that much. It strives to innovate upon the original, but there are parts that shine. First of all, it runs like a dream on the PS3, though it still can slow down when tearing down builds of multiple cars as you pile through some barrels, spraying automatic shells at two other cars. Most of the time, it's as smooth as the Fonz, filling the screen with countless pieces of, well everything. Shredding through cars, buildings, signs, bridges, and countless pipes, boxes, and barrels will and have little effect on the frame rate, thus making it a fast paced race, which is just dandy.

Full Auto 2 switches it's modes up quite a bit, offering arcade, multiplayer, online and career, each having its own bit of added content. Career mode opens up so players have a choice between multiple missions. The objectives mean little, so plan on doing the same number of events as in the original Full Auto. These events range from escort runs, straightforward races, rival challenges, and time trials. There are also tracks that call for protection of teammates in any of the mentioned event types, but most simply offer a series of primary and secondary objectives, which puts a bit of variability into the gameplay. These can range from taking out specific rival vehicles, killing a specific number of average enemies, taking out ammo supply depot's, completing the event without dying, or completing the event under a certain time limit.

A computer-based authority figure called S.A.G.E. is who you'll be guided by throughout the career. This female voiced computer has brought you in because the world needs riddance from the evil gang running amuck in the streets. The gang cannot be stopped by the fuzz, so of course it's all up to you to take 'em all out. In the end, the thin story that is present doesn't spike any interest, and will never add to the game. The career mode is menu-driven, and takes you from one set of events to the next.

Unfortunately, the gameplay is what hasn't changed much, only adding a couple of features to make it prevail over its predecessor. The biggest change is the much needed arena-style combat, not making much sense to be excluded from the first game, especially when that game features hood-mounted rockets. These combat arenas do show themselves as missions in the career mode, but you can launch the multiplayer mode found in the start menu at any time. Offering up six arenas, most succeed in good layout, including power-up placement. Take the madness to a large industrial complex, destroyed urban area, or even a shipyard with your friends, and have the most fun Full Auto 2 will probably offer. Arena battles in Full Auto 2 really bring a next-gen Twisted Metal kind of feel. The large amounts of exploding vehicles and flaming frames, flying shells and loud smacking side swipes will tickle you pink, that's for sure. The aforesaid power-ups are scattered about the arena, allowing for a limited time the use of awesome enhancements like unlimited firepower (reload time = 0), ammo, napalm, and instant repair. The items show up on your radar when you're close enough, and picking them up can really make or break you. Thus, the pick-ups really add strategy to the whole ordeal.

The visuals are much more impressive in Full Auto 2. Its environments never being exactly the same, players will notice the improvements throughout. Stretching past the simple cosmetic judgment, certain stages have objects that can be targeted and destroyed to disrupt or even exterminate rival vehicles. Heavy fire topples entire buildings, bridges, depots, docked ships, and obviously other vehicles. Rivals can be squashed by simply blasting the scenery, making it come crashing down and making play-dough out of what once was posing a threat. Massive structures can actually change a good portion of a map when destroyed. Unlocking different routes or battle arenas, Full Auto 2 makes the original look as dynamic as a rock. Of course, these events also add challenge, having to aim and time your shots to make an object smash into a rival car.

Of course, these destructible environments don't destroy themselves, so let's talk firepower. As in the original, Full Auto 2 features missiles, machineguns and mines, but now you've got lasers, spiked ram plates and napalm all at your disposal. Ramming people into smithereens will never grow old, especially in a huge badass truck. The mines have also changed to "rear grenades", forming circular clusters on the ground, which makes them extraordinarily difficult to completely dodge. You can also strap on some smokescreen among other gadgets. Each vehicle dictates how many options and gadgets are allowed, all restricting the amount of 20mm cannons you strap on at a time. All of these options raise the importance on the selections you make before each event, making or breaking you in the end. It can really make a difference.

The line-up of vehicles in Full Auto 2 is chalked full of new rides to mount your cannons and rams on, ranging from SUVs, to sports cars, all the way to police cruisers and trucks. Each vehicle has different mix of speed and durability, so again, choosing the right vehicle is extremely important. Personally, I achieved great success with speed, sticking with the Sports cars as much as possible. But for most, it's probably a pretty goofed up idea to climb into the shiny red beamer to smash through arena combat or try to fly by a pack of Lambo's in a rusty pick-up. Customization goes as far as paint colour and unlockable skins, which is a decent addition.

The sounds are simply what you would expect: plenty of explosions, gun fire, and engine noises. The music is decent electronic music that does a nice job of fitting in with the intense gameplay. The more important vehicles in the career mode actually have licensed music associated with them. The closer you get to them, the louder the car's theme song will play. The switch from the generic electronic tunes to the licensed music proves to be a little too harsh, as they don't agree most of the time.

Full Auto 2 scoffs at the original multiplayer, featuring offline single and team deathmatch, as well as online games Base Assault and Cat and Mouse. The first of the two is a team based game with one goal in mind: blow up the enemy base. The bomb will spawn in a random location on the map, making the objective a simple grab and drop. But it's not so simple when there's a team of vehicles after you, stacked with enough firepower to level the entire arena if necessary. The second, Cat and Mouse, is as it sounds. One player is the mouse, while the others play the cat. The proceeding events unfold as follows: Cat chases mouse, cat finds mouse, cat annihilates mouse in an almost degrading matter. All of the multiplayer options as a whole help Full Auto 2 gain some much-needed replay value, and play on its strengths like the original failed to do.

Overall, Full Auto 2 improves on its predecessor, although not in an extreme way. The sheer destructiveness will make anyone feel truly bad to the bone. The changing environments offer a great switch in flow, and battle arenas add variety. All of the above runs smooth and all the meanwhile looks fantastic. The story is thin, the menu and narration driven career is not a plus, and the gameplay can get repetitive. But Full Auto 2 is still a safe bet, as long as you shut the noggin down and simply blow your friends to smithereens, maybe coming up with a victory jig to further the humiliation.