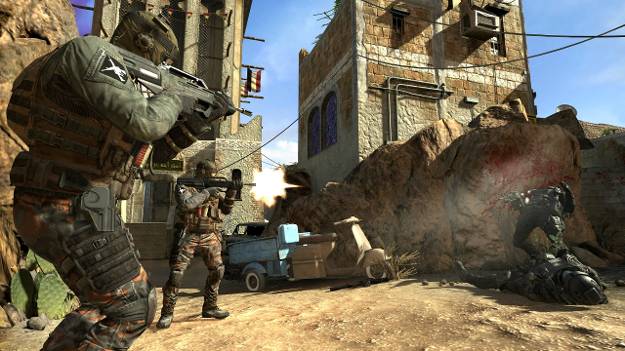 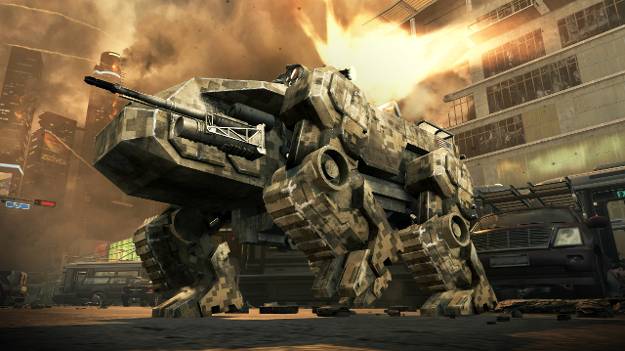 Writing about Call of Duty is like writing about white bread. What more really needs to be said about a franchise that out grosses all other entertainment properties without fail for years now? Well, believe it or not, with the release of BLOPS II, it turns out that this old dog can learn some new tricks, some of which are very impressive.

I know I’m in the minority here when I say that I generally play COD for the campaigns. I personally relish the ridiculous and mindless roller coaster rides that the series has provided since its first iteration as a WWII shooter on the PC. Few shooter franchises let you just shut your brain off for well designed, set piece heavy anarchy like this series does. Man, it sure feels like a really long time ago that COD was a WWII franchise eh? But I digress. Developer Treyarch has taken some significant risks and chances with the established formula with this instalment, and most are for the better.

The storyline in BLOPS II is by far the best the series has seen. Sure, some people got attached to characters like Soap MacTavish and Captain Price in the Modern Warfare series, but they were just a slightly human face on an admittedly ridiculous plotline that was just an excuse for the kiss kiss, bang bang of that branch of the COD series. This time around, the campaign actually features not only well rounded characters, but backs them up with an interesting storyline that is paced well. Even the main villain is made sympathetic despite his psychotic nature. The plot itself jumps in time between the cold war and the future of 2025. You’ll see many different places and warzones in the world, including Afghanistan and Panama, to name a few. The main plotline essentially deals with a warlord by the name of Menendez who has a nefarious plot to hack and hijack the entire American drone army to turn it against itself. In between, you’ll deal with surprising themes like family life in the military and how far one should go when following the orders of their superiors. It’s unexpectedly engrossing stuff. 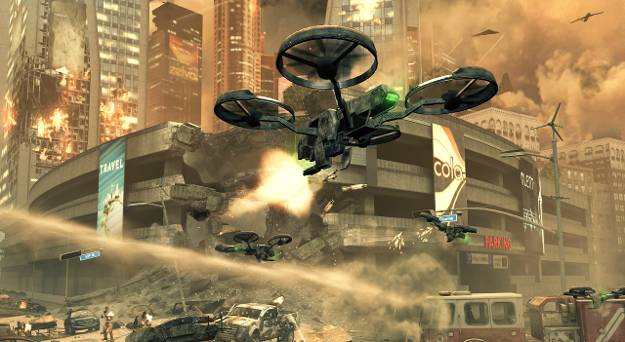 What makes this COD unique amongst its forebears is that the storyline not only branches, but takes into account player choice and actions better than almost any shooter I’ve played before. Even highly touted games with branching storylines like Mass Effect and Fallout use binary player choice input to bring the story along. Leave it to a franchise known for its rigid and scripted nature to create an organic system that affects the storyline not only through direct choices, but through your regular gameplay actions through the levels. Things like exploration and questioning orders can affect the storyline in surprising ways. This is by far the most replayable COD campaign yet, which is also helped along by the insanely hard veteran mode and challenge lists for completionists.

Playing around with the futuristic weapons of BLOPS II is also great fun. Much like Ghost Recon before it, BLOPS II gives you an arsenal of weaponry that ranges from unmanned flying drones, armadillo-like walking tanks, EMP grenades, heat-seeking explosive pistol rounds, and rifle scopes that can detect heat signatures through walls among several others. The futuristic weapons and gadgets add a nice wrinkle to a franchise that had essentially become defined by an interchangeable number of 20th century scopes and assault rifles.

Not all is well in the campaign though. New to the fray this time are strikeforce missions that mix light real time strategy with first person mayhem. The idea is sound. At the touch of a button you can swap from a first person viewpoint of a soldier or drone to a bird’s eye view of a map as you strategically position your forces to attack or defend various objectives. Success or failure in these missions also affects the storyline in various ways. It’s too bad that the missions are essentially completely broken. Enemy soldiers will constantly respawn in enormous numbers, and your soldiers have no AI. I’m not kidding. They’ll constantly ignore orders, they’ll ignore enemies shooting at them from three feet away, and they’ll stand out in the open like mannequins as they’re perforated by bullets. Even if you manage to get them where you want, they don’t have your back, and it will constantly get you killed with the dozens of enemies swarming the levels. The only real way to succeed in some levels is take control of one soldier and make a beeline for the objectives. Hopefully if you die, your AI mates won’t have gotten themselves all killed. The idea is sound but the execution is not only awful, but a significant blemish on what is otherwise one of the finest linear-style shooter campaigns of this hardware generation.

Moving on the multiplayer modes, it’s basically the same COD multiplayer you either love or loathe for the most part. There’s good reasons that COD is the most popular shooter franchise on the planet, and those reasons remain the same here. The net code is rock solid, completely lag free, and the gameplay is fast and fluid. The maps are well designed and suit the number of players per game well. Different modes have different player caps, but support a maximum of 24 players, although the best modes generally have a lower number. Unlocking new perks, weapons and upgrades through XP remains as addictive as ever. There are few moments in gaming more satisfying that taking out four or five real people and then unleashing kill streak perks upon your helpless opponents. There’s even a good mix of objective team based modes, and just straight up deathmatch.

However, that means a lot of the problems with COD multiplayer rear their ugly head here like they always have. My second biggest beef is that even in the team based modes, COD encourages a lone wolf approach based more on twitch reflexes than any sort of plan or strategy. Far too many games devolve into mindlessly running around the level, just looking for a target for your crosshairs. In a world where the sublime team based tactics, giant maps, and vehicular mayhem of Battlefield 3 exist, going back to a more single minded multiplayer shooter like COD feels like a step back in a lot of respects. This brings me to my biggest beef with COD multiplayer. It’s a newbie nightmare. Much like Halo or any other excessively popular online shooter with an XP system, beginner players are behind the 8-ball right off the bat. Not only are your reflexes and skill at a lower level than most players, but you’re given relative peashooters and useless perks to go up against prestige level players with fully decked out arsenals. At least Treyarch saw fit to include a boot camp that’s half human, half bots, which is a god send to get you and your unlocks started. You can stay in the boot camp past the level 10 cap (which takes about 5 or 6 rounds to reach), but you’ll only gain half XP from there. There are some minor differences in how XP is doled out, mostly through the new token system and how your soldier is equipped with 10 upgrades at once. For example, a perk takes the same amount of slots in your equipment as a sidearm. It gives players more flexibility in how they can customize their soldier, and the change is for the better. 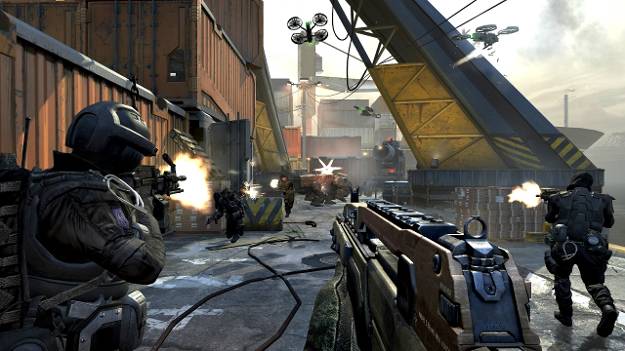 Players can also create their own banners through an easy to use tool, which is great for players that care. I personally didn’t. There are also some live streaming options for league play, which is also great for the elite COD hardcore, but I couldn’t be bothered with it either. I’d rather just play than watch someone else play.

Finally, being a Treyarch instalment of COD, Zombies mode makes a return as well, but it feels somewhat limited, especially compared to more fleshed out zombie co-op games like Left 4 Dead. The main attraction here is the TranZit mode, which has you and your friends killing zombies for points that can be exchange for weapons, perks, and ammo. As you progress through TranZit, you’ll visit an ever expanding map and increasingly difficult and numerous zombie hordes. There’s also a competitive yet co-operative team mode that has players competing as the CDC and the CIA to see who can survive longer and take more zombies down with them, which was frankly more fun to play than TranZit. Still, only three maps, bullet sponge enemies that can kill in two hits, and some annoying quirks like flaming cracks in the ground that force you to jump around everywhere, add up to a mode that is easily the least attractive part of a wonderfully fleshed out shooter package. Personally, I was much more enthralled and compelled by last year’s Modern Warfare 3 excellent survival mode for my COD co-op kicks.

In terms of presentation, BLOPS II generally shines, but some warts in the aging engine are starting to show. The game always runs at a blazing fast frame rate, which is essential for the kind of shooter action the series is known for. Environments are busy and detailed (although zombies mode looks bland and murky with its lack of color and vibrancy) and character and facial animation is generally top notch. The wrinkles appear when some textures get muddy up close and some visual glitches rear their ugly head. The excellent presentation is helped by phenomenal sound design that brings the bombastic set pieces to life and quieter moments are made more engrossing and powerful through superb voice acting.

Let’s face it. You’ve likely already decided whether Black Ops II is a purchase you’re going to make or not. COD is a very take it or leave it affair for most gamers. However, if you’ve stayed away from the series and are possibly considering jumping back in, then this Duty has a few new tricks to Call you back. BLOPS II is highly recommended for COD fans and fence sitters, but it won’t change your mind if you never accepted the charges on this Call in the first place.