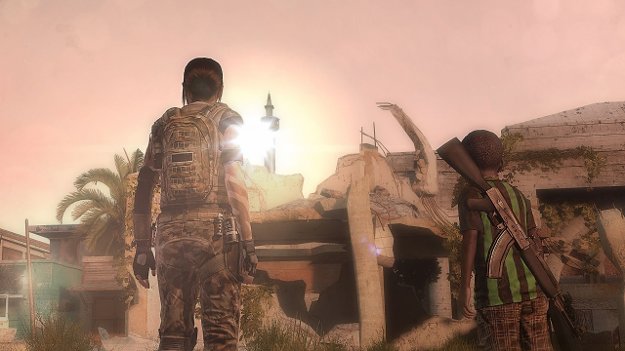 What do you get when you have media with no tension, no drama and one of the cutest actresses in Hollywood? Well you either get X-Men: The Last Stand or Beyond: Two Souls. The crappiness of The Last Stand is well documented so we’re going to be picking on Beyond: Two Souls now since at least that movie was only an hour and forty minutes of suffering, Beyond has the temerity to last about ten hours which is more than eight hours longer than a movie this cheesy really needs to be.

Yes, that’s right. I’m calling this thing exactly what it is – an eight hour, cheesy as hell movie. I’m not one to get into the conversation as to what constitutes a video game and what doesn’t but I’m willing to say that Beyond: Two Souls isn’t actually a video game. A video game requires one thing in my mind: some actual ability to fail in your endeavors if you do poorly enough. Yep, you literally cannot fail in this game. If you happen to fail in one of the various QTE’s that make up this game at best all you’ll get is some dialogue changes. That’s it. But here you have no real dramatic tension since even if you fail to escape a fire you just wake up in the hospital and don't miss out on a single thing. That's when your invisi-buddy Aiden isn't just making you flat out invincible to completely ruin any dramatic tension a scene may have had.

So if there’s literally no chance to fail then why was this property made into a video game instead of just a movie? I’m going to go out on a limb and blame David Cage’s delusions of being some sort of video game auteur. Rather than putting in the effort to make a plot that can handle a wide variety of outcomes to the QTE’s, like they did in Heavy Rain, they’ve essentially made a quasi-interactive movie. Everything about the game can proceed entirely without interaction on the part of the player. There actually are decision points although they're mostly invisible and without screwing around with the game a good deal you'll never even realize that they're there which will really hamper multiple playthroughs, something Heavy Rain managed to do nicely.

Comparing it to Heavy Rain only makes you realize how lackluster the whole experience actually is. Heavy Rain, for all of its many, many, MANY, faults had a fairly complex method of resolving the plot. Failing to gain the upper hand in an encounter could change the whole narrative of a scene or even kill off your character entirely. Hell it’s entirely possible to have an ending where the bad guy gets off scot-free if you just fail enough (on purpose or accidentally).

You may be asking why I haven’t touched upon the story in such a story driven experience. Well the story just flat out stinks. While it has a few high points that make some genuine use out of the scenario so does Twilight. Unfortunately whoever chose to make the game play out in a ridiculously aggravating non-linear fashion botched this even moreso than whoever ruined the gameplay. Beyond exemplifies why telling people why things are happening in a visual medium instead of actually showing them is an abject failure. A nice example of this is Jodie (Ellen Page’s character) falling in love with Designated Love Interest #12851. When he’s introduced he’s kind of a jerkass, coming across as cold and rather unlikable. Then we time skip forward to them being in wuv which comes right the hell out of nowhere where Jodie basically tells the audience that DLI is an amazing person without the viewer seeing any of that.

If telling people how characters feel comes off as embarrassing young adult fiction writing at its finest to you then you have a good idea as to the quality of the rest of the game. Beyond tries to tell the storyline in a non-linear fashion, jumping from age period to age period without much regard to narrative.  Honestly it feels like a Terrence Malick film as done by Uwe Boll. It’s not just bad it’s embarrassing. There’s no real sense of who people are when they’re introduced beyond their purpose in the storytelling, making each person little more than the tropes that make up their entire being. This is hack writing that uses faux-sophistication to mask its inadequacies.

It has just about everything you’d expect for a hack with too big of a budget to put together. Every game Quantic Dream works on has a sex scene, whether simulated or graphic, and / or random nudity. Because of Ellen Page’s refusal to do nudity all of this stuff is covered up and nowhere near as graphic as their last two games but it’s still there and it’s a lame attempt at titillation. Unfortunately more effort seems to have been put into these scenes than any sort of narrative or character development. What's doubly annoying about these scenes is that they sexualize a character that doesn't even remotely need that sexualization to be appealing to someone who isn't put off by a strong female character.

Well, you may be thinking to yourself, at least the game looks fantastic. Admittedly yes it does. However when held up to something like The Last of Us or even, once again, Heavy Rain the graphics aren’t nearly that impressive. The PS3 has thrown out some gorgeous first-party visuals so I’m not giving a game any credit for being a AAA release and not managing to screw it up when it messes up everything else.

I’m sorry but this thing is just embarrassing. When you’ve got a game that lacks any sort of tension or drama but is supposed to be a dramatic adventure, what’s left? Nothing, that’s what. All we have here is some good voice acting and the usual graphics that accompany any PS3 exclusive title and literally nothing to recommend to anyone looking for more than just sit there and not be entertained. If you’re desperate to experience the “plot” then just watch a Let’s Play – it’ll be exactly like playing the game yourself without having to waste money on the disc.