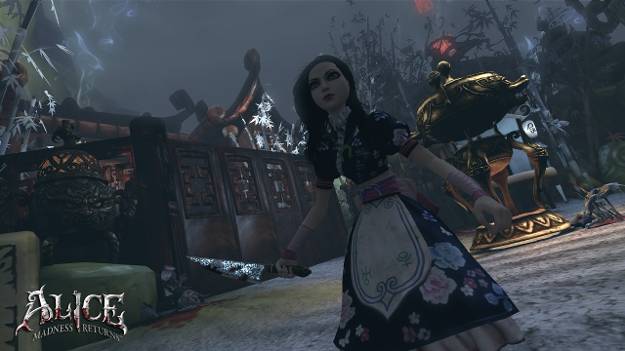 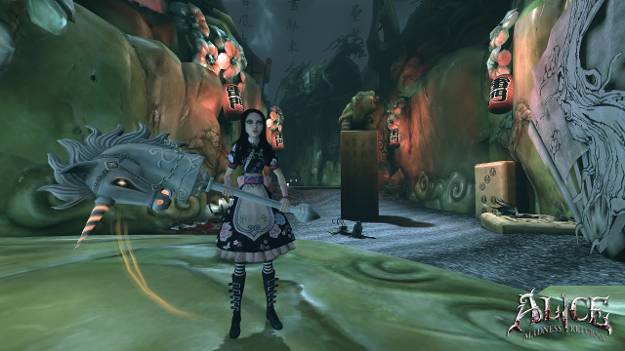 I'll say it right now. I'm a fan of EA's recent infatuation with classic literature. While their titles based on classic works like Alice in Wonderland or Dante's Inferno may not be the most original games in the world gameplay wise, the mere fact that they're thinking outside the box for their newest titles shows ambition and a fresh attitude towards making games can only be good for the industry.

Following in the footsteps of last year's Dante's Inferno, Alice: Madness Returns is a dark and mature, yet loose retelling of the classic Alice literature by Lewis Carroll. Being a sequel, the game takes place ten years after the events of the first Alice game. Alice is now an impoverished orphan working at a London orphanage. Still haunted by the memories of a blaze that took the lives of her family, her memories and hallucinations of a dark and twisted wonderland begin to return. Flipping in between a dreary London landscape and an ever-changing Wonderland under attack by an evil mechanical train, Alice must unlock and gather memories and clues as to what really happened on that fateful day where her family burned alive.

Split into five chapters, each section of the game begins with Alice navigating a decrepit 19th century London before tumbling down the rabbit hole into different parts of Wonderland. This is where most of the game takes place. In London, Alice can only navigate. In Wonderland, she can wield weapons, triple jump in the air, float from ledge to ledge, shrink down to tiny proportions, and more. She'll need every one of those skills if she's to survive this hellish vision of Wonderland. The writing of the game is fantastic, but can motivations are sometimes scarce and the story can be difficult to follow. Considering this is a game that deals with themes of sanity, this may be on purpose, but it doesn't make the main storyline any easier to follow at times.

Starting with the combat, Alice features a combat engine that is varied, stylish, and fun. Alice will wield weapons like a butcher knife, a Gatling-gun-like pepper grinder, a hammer-like hobby horse, a teapot cannon, and a clockwork bomb. All the weapons feel great to use, and while you'll have used similar items in other games, their designs here really feel like something you haven't played around with before. Alice can also deflect projectiles with her umbrella and avoid attacks with a dodge move that has her explode into a swarm of butterflies. Each weapon can also be upgraded four times by collecting teeth from downed enemies and hidden crates and rooms.

A quick lock-on system helps make the combat fast and fluid, and it generally works well. The only issues I encountered are when the camera gets confused as to which enemy you're trying to target. It'll also give you a very awkward view of the action from time to time as well. For the most part, it's not a huge issue, but it can lead to a frustrating death or two.

The enemies you'll face are as corrupt as the environments you'll navigate. To be honest, they lack a clear description because of how odd they are. In general, you'll face "ruins" which are fearsome enemies made out of black sludge and parts of toy dolls. I won't spoil any more of the enemies you'll encounter, but suffice to say each one is creepier and more frightening than the last. Their designs perfectly reflect Alice's fractured state of mind.

Combat is only half of the Alice experience. You'll spend equal time platforming and jumping your way through the hellish environments. Alice has a very handy triple jump to traverse long jumps which can be used in conjunction with a floating mechanic. Alice will also be flung around and catapulted around the environs by rushes of steam, bouncy mushrooms, and down slippery slides. The environments are simply a joy to navigate. The only complaint I had with the platforming is that Alice doesn't have the ability to grab on and climb ledges, which results in a few cheap deaths when you're only a foot short of the mark.

Exploration doesn't end with bouncing along the environments either. Early in the game, Alice will take a shrinking serum that allows her to fit into tiny crevices and visually unlock invisible clues. When in "shrink-mode" Alice can see clues to items hidden in the environments and reveal invisible platforms. Shrinking is as easy as a pull of the left trigger, and never runs out. The catch is that while shrunk, Alice is defenceless.

Hidden items and secrets are strewn throughout the levels. You'll collect fragmented memories, bottles, the aforementioned teeth, and make floating pig snouts sneeze with your pepper grinder. No, that's not a typo. The deviously hidden snouts will reveal hidden passageways and are well worth your time to seek out. Well-placed audio clues will reveal their locations to any intrepid explorer. Hidden rooms and challenges will further flesh out the story as well. The variety is further established by mini-games like a Gradius-style 2D shooter that has you firing cannon balls and depth charges at flying or swimming enemies.

There is no multiplayer to speak of, but considering that each chapter takes around 2-3 hours to complete combined with the loads of collectibles, Alice will easily keep you busy for longer than the average non-RPG title.

Graphically speaking, Madness Returns is a knockout. Utilizing the Unreal Engine, the varied environments and enemies will have you simply standing around and admiring the artists' handiwork. Textures are exquisite, the great lighting establishes the oppressive atmosphere, and the framerate never takes a dive. This game truly represents what a studio like Pixar would accomplish if they ever took a dive into darker, adult territory. Special mention has to be made to the Alice models, which has probably the best rendered hair I've ever seen in a game. Her outfits also change from chapter to chapter to make her fit into the specific environment effectively.

Voice acting is uniformly solid across the board and the music is suitably creepy and pulse-pounding. The sounds of combat are also fierce and appropriate. In particular, the roars and screeches of your enemies will get under your skin effectively.

Alice: Madness Returns reminds me a lot of classic N64 platformers like Mario 64 and Banjo Kazooie in the best of ways. By mixing a dark reimagining of a literary classic with stylish combat and rock-solid platforming, EA and Spicy Horse have created a gaming experience quite unlike any other. At any rate, its miles better than the lacklustre Tim Burton movie released last year. This is one rabbit hole worth tumbling down.