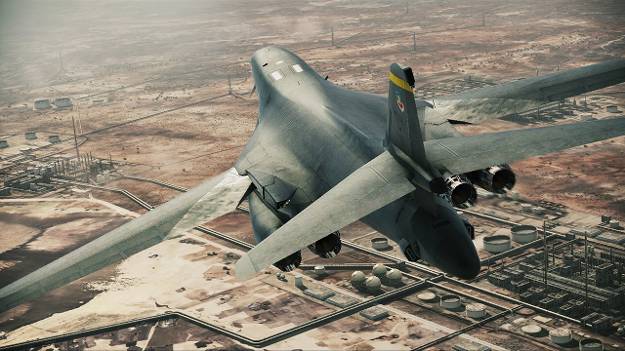 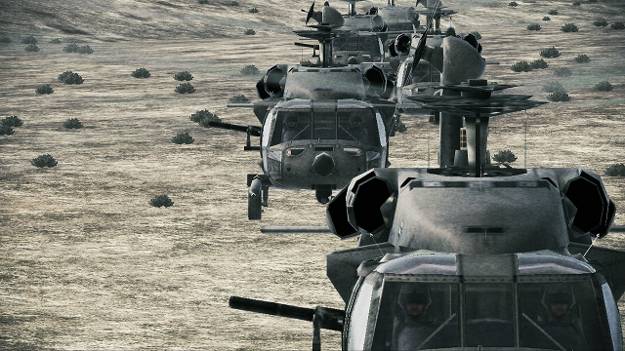 If there's one genre that is completely overblown and overdone in today's gaming marketplace, it's the military shooter. You know the kind, the one that has the Russian terrorists planning to nuke targets around the world for... whatever reason. So, obviously, it's up to the Americans with their Hoo-rah spirit and superior tools of destruction to make the world safe for democracy and the American way of life.

So while that's essentially the plot of Ace Combat: Assault Horizon, at least the game takes a fairly unique at the approach to the gameplay aspects. Instead of putting you behind the sights of an assault rifle, the Ace Combat series has always put you behind the flight sticks of the worlds fastest and most destructive jets.

The difference between this instalment and the others, is that this one includes more than just jets, this time including helicopters sequences, on rails door gunner sequences, and even an AC 130 level that has you bombing rebels from way up on high. While the jets will take up at least half of your play time, even the objectives and locales are varied enough to ensure you won't get bored. Different objectives have you stopping bombers from nuking Dubai, protecting ground forces with calculated airstrikes, and intense dogfights. The environments are also nicely varied, with worldwide locales such as Miami, Africa, Dubai, the Suez Canal in Egypt, and more.

The dogfights are certainly Ace Combat's bread and butter, and it's very solidly executed in this game. When chasing down an enemy target, if you're able to get close enough, a circle will appear over the target. Press both triggers at once at that point to initiate dogfight mode. Once here, you'll enter a scripted sequence that provides many of the game's hairier (or Harrier if you prefer... har har) scripted moments. In these moments you'll chase your enemy, sometimes through collapsing cities or into canyons. Can you get that last kill shot before you have to pull up? To succeed in these moments, you have to keep your target in the middle of an aiming reticule that changes size depending on how far away your enemy is. Keep them there long enough, and your missiles will lock on.

On the flip side, defence is very cool. When you're being chased, you'll see the enemy's aiming circle as well. Slow down your speed enough, and you'll be able to turn the tables on your pursuer, get behind them for a pair of well placed missile shots. In fact, maintaining the right levels or deceleration and acceleration are key to victory as well. Go too slowly and your plane will stall out, go too fast and manoeuvrability will go out the window.

You'll have plenty of options for real world planes to pick before you start each level including MiGs, f-14s, f-18s, Typhoons, and more. Each have varying stats in speed, mobility, fire power, stability, and defence. Also, different planes have strengths and configurations for air to air and air to ground missions.

The helicopter levels are also a lot of fun, but not as deep or fulfilling as the airplane levels. They control well enough, but using your miniguns to take out vehicles and rebels on rooftops is simply not as satisfying as the intense dogfights you'll find in the plane levels.

No matter what vehicle your in, you'll encounter practically non existent co-operative AI. They do nearly nothing in the game, which is really frustrating when you have to take out three bombers in 45 seconds before an entire city is destroyed, and your compatriots are too busy flying in circles to help.

There are a smattering of multiplayer modes as well, which are fun but hard to jump into. The busiest I've ever seen the servers were a whopping three games to join. This game's multiplayer longevity is very likely non-existent, which is a shame, because it's a good time, especially if you have a friend to play with. The modes include deathmatch and team objective modes, in addition to some two player co-op modes.

Graphics and presentation are good, but not fantastic. The environments lack fine detail, especially when you see the stiffly animated ground troops that look goofy. Explosions look great but strangely detached from whatever is exploding. On the positive side, the planes look great, and break apart convincingly when blown up. The environments also look great from a distance, which you usually are. Overall, its a good looking game, but not perfect. The frame rate definitely takes some hits when the action gets more intense, especially in the helicopter levels. The presentation also takes a hit with the lousy script and pedestrian voice acting.

Overall, Ace Combat: Assault Horizon is a fun yet grittier take on a classic franchise from the days of the PlayStation One. If you're looking for a game that will provide the scripted thrills of a Call of Duty title with a different take on war, you should definitely consider jumping into this cockpit.